This year's meeting of Turkey’s Higher Military Council to decide on promotions for generals and admirals provides some important clues about the direction of US-Turkish ties. 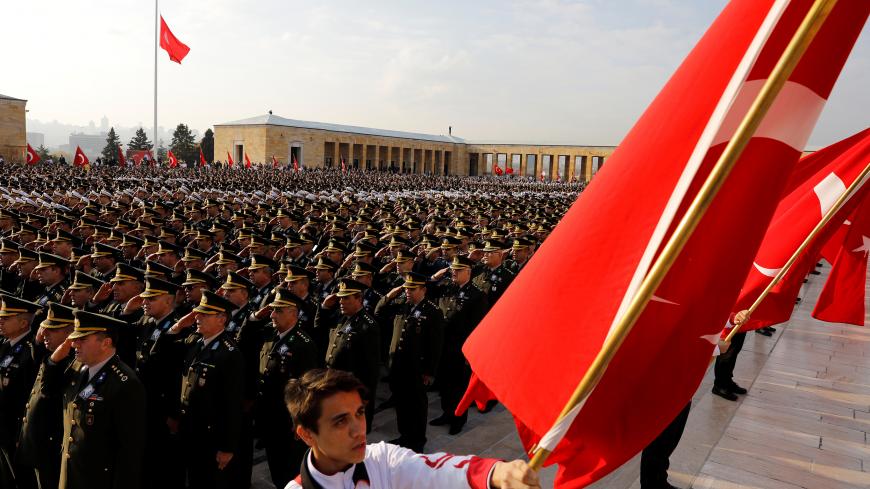 Military officers stand at attention during a ceremony at the mausoleum of Mustafa Kemal Ataturk to mark the anniversary of Ataturk's death, Ankara, Nov. 10, 2018. - REUTERS/Umit Bektas

Until some five or six years ago, the Turkish public would have been enthralled by a YAS meeting, held twice a year. The possible outcomes would have been debated for days on end. This year, however, the meeting lasted less than half a day instead of the typical three. On top of that, the decisions taken will significantly affect the organizational structure of the Turkish Armed Forces (TSK) and the country’s sensitive civilian-military relations.

The chief of the General Staff and commanders of the air force, navy and land forces all retained their jobs. This signifies that Defense Minister Hulusi Akar’s control over the TSK command is secure, as they had been appointed by him at the previous YAS meeting. Over the past three years, Akar has thus succeeded in establishing himself as central to civilian-military relations in Turkey.

In 2016, there had been 16 four-star generals in the TSK, now there are only seven. No lieutenant general or vice admiral was promoted to four-star status at the YAS meeting. The number of generals and admirals stood at 241 before the YAS meeting, after which they numbered 233. All told, 47 of them have been retired, and some of the newly vacant positions are yet to be filled.

Given that 130,000 conscripts will receive early discharges as stipulated by a law enacted on June 25 decreasing the length of mandatory service, the reduction in the number of generals is not terribly surprising. Military personnel in the TSK had numbered 370,000 in June 2016, and after the round of early releases will stand at 220,000.

The attrition within the military is being carried out with the intention of remaking the TSK as an all-volunteer and fully professional force by recruiting more contract sergeants and specialist privates. The initiative has generated little interest as far as recruitment is concerned. A major effort is being made to prevent the proposed force reduction from affecting operational effectiveness, but problems still remain in terms of stabilizing the personnel management system since the July 2016 coup attempt. Delays and mishaps in the transition to an all-volunteer force are entirely possible.

Most of the generals who have been retired had been tried for allegedly trying to overthrow the government in the Ergenekon and Sledgehammer affairs but restored to their ranks and reputations further restored because of their actions during the July 15 coup attempt. That they expressed to Erdogan their strong opposition to their early retirement was interpreted as a purge of patriotic and secularist officers who had struggled against the Gulen movement and carried the load of the TSK in those days of upheavals.

Another decision supporting the thesis that those who actively struggled against Gulenists are being punished was the denial of a regular promotion to vice admiral for Cihat Yayci, the current chief of staff of the navy. Yayci, with his Fetometre algorithm, was the architect of the plan to remove Gulenists from the service. He is also known for his hawkish views on issues related to the Eastern Mediterranean.

The most controversial decision taken at the YAS meeting was to discharge 21 army brigadiers before their retirement dates along with seven rear admirals and four air force generals who commanded cross-border operations in Syria, northern Iraq and critical domestic terrorism operations.

It is possible to assert that with the YAS' decisions, the army contingent that opposes joint operations with the United States in various areas, including on safe zones east of Euphrates in Syria, was eliminated. Also attracting attention was that most colonels promoted to brigadier in the army have successful commando and special forces records. This is a major indicator that in 2020 the TSK will give priority to combating the outlawed Kurdistan Workers Party in Syria and Iraq as well as in Turkey.

The unexpected retirements of three generals from the team of Gen. Metin Temel with outstanding records in combating terror in Iraqi and Syria also attracted notice. Meanwhile, Temel was removed in December from his post as commander of the 2nd Army and reassigned to a minor bureaucratic position in the office of the chief of staff in Ankara without explanation. Those in the know say the retirements amounted to a total purge of Temel's team, which was known for its anti-US positions.

So, what is the general upshot of the YAS decisions?

Contrary to conventional wisdom, it can be argued that the TSK has not become a pro-Erdogan institution. At the moment, civilian-military relations can best be described as resting on the personal relationship between Erdogan and Akar. Many observers believe that Akar will likely have an influential role in the political arena and even have a major say in military-government relations in the post-Erdogan era.

According to some retired officers, with this year's YAS decisions, Erdogan was able to purge the secularist, fiercely anti-Gulenist officers who generally follow the Eurasianist (anti-Western) line. In short, Erdogan is seeking first to trim the TSK and then to form a command team under his control.

Will Akar help Erdogan make the TSK “Erdogan’s military” or prevent it? How far will Akar try to maintain a pro-Western and pro-NATO identity for the TSK? Will the current harmony and cooperation between Erdogan and Akar devolve into confrontation as a result of risky economic and foreign policy actions?

For answers to these questions and to learn whether Erdogan or Akar will win the day, tune in to the next YAS meeting the first week of December in 2019.