The extraordinary personalization of Turkey’s civilian-military relations is deinstitutionalizing the Turkish military structure and causing internal power struggles within the army ranks. 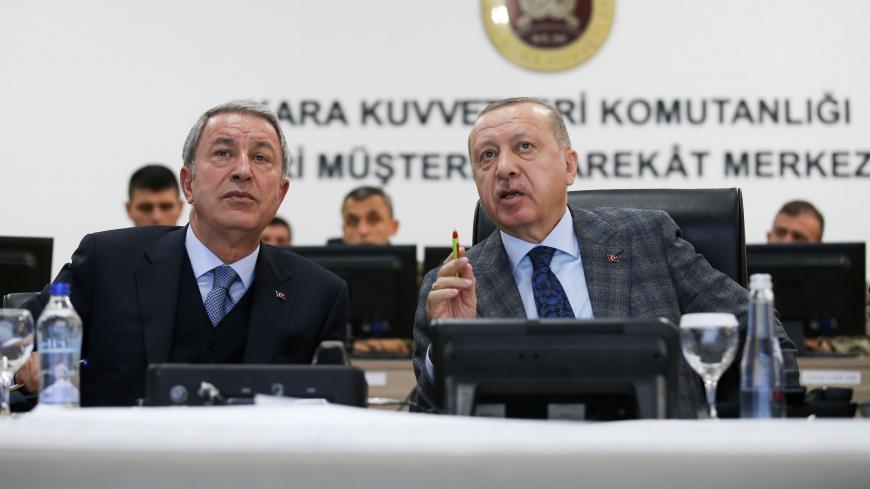 Fraternization between Turkish generals and politicians and an excessive public popularity of military leaders traditionally have been frowned upon and seen as eroding the institutional identity of the Turkish Armed Forces (TSK).

But this trend seems to have changed following the failed coup attempt of July 15, 2016. Civilians seem to have acquired the upper hand in civilian-military relations; still, it is too early to claim this has become institutionalized because the new system is still too fragile, depending as it does on interpersonal relations.

The latest example of this fragility was seen in Ankara’s recent efforts to determine policy toward the Libya crisis.

At the end of December, sources in Ankara confirmed, a policy formulation meeting was held at the Presidential Palace.

In this meeting, the views of the admiral who was representing the Turkish military were critical, as important subjects were of a maritime nature. At the outset, the current chief of staff of the Turkish navy, Rear Adm. Cihat Yayci — who has written a book and several academic articles on Libya — was expected to represent the military. In a statement at the end of December, President Recep Tayyip Erdogan expressed appreciation to Yayci for his work on Libya and for initiating the Turkish-Libyan maritime deal that was signed Nov. 27. Yayci, who also gained much popularity among government officials and the public because of his efforts to clean Gulenists from the TSK, was seeing his popularity quickly grow.

According to Turkish media reports, Yayci was invited to the meeting at the Presidential Palace, but Defense Minister Hulusi Akar did not allow him to attend the critical strategy gathering and dispatched another admiral instead.

Official sources told Al-Monitor that Akar also turned down requests from politicians for Yayci to explain to the public the background of the moves involving Libya and the reasons for the maritime zone deal.

We know that following the August Higher Military Council, which decided on the promotions of generals and admirals, the influence of Akar over the TSK has grown. Akar either retired the generals who had contradicted him or reassigned them to passive duties.

Now many are wondering whether Yayci will share the same fate of those generals.

What is to be expected in Turkey’s civilian-military relations in 2020?

In 2019, photographs showed ruling Justice and Development Party (AKP) officials who did not have any active role in the government visiting military operation centers where critical issues are discussed and showed visits of uniformed military officials to AKP officials in their offices. If this trend continues, both the domestic and international public may think that the TSK is increasingly becoming a branch of a political party.

Another point is the strategic military ties that are primarily determined by the relations between Akar and TSK Chief of General Staff Yasar Guler and other commanders. Since 2018, harmony and close ties between Akar and Guler have been apparent; the close relationship between the two and the respect they have for each other are crucial.

The question to be asked is whether the system will function in the same way when the top brass are replaced.

Akar, who formerly served as chief of general staff, is capable of deciding on military issues, but what about administrative and political ones? For example, can Akar bypass the chief of the general staff and other force commanders and issue an operational order? If and when he does, will this be a “political instruction” or a “military order”?

Finally there might be some problems with regard to monitoring and oversight. Erdogan and Akar have mutually confident relations, yet for the sake of transparency and accountability would it not be better to have more openness with the parliament and civil society?

Eyes will be on Yayci in the 2020 session of the Higher Military Council to see whether he is promoted to vice admiral. Or will Erdogan allow Akar to retire Yayci early?

In short, the future professional career of Yayci may give us strong clues about the evolution of civilian-military relations in Turkey and the relationship between Akar and Erdogan.