The demotion and then resignation of the chief of staff of the Turkish navy, Rear Adm. Cihat Yayci, has led to questions whether the Turkish government is distancing itself from Euroasianist figures to mend ties with its Western partners. 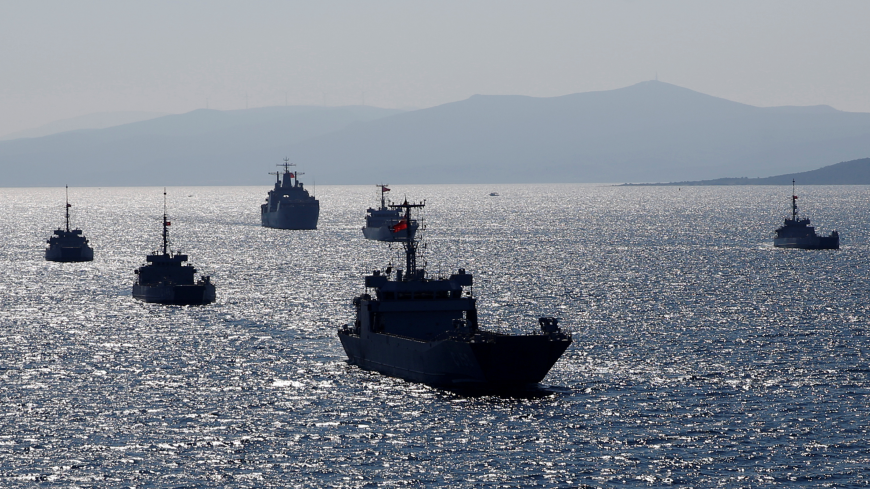 The surprising demotion and ensuing resignation of a top navy admiral, who is known as the architect of Turkey’s controversial Libya policy, came as a shock for pro-government and opposition quarters alike, leading many to wonder whether President Recep Tayyip Erdogan is distancing himself from influential anti-Western cliques within the Turkish army.

The relationship between Turkey's civilian governments and the military has seen many turnabouts under the rule of the Justice and Development Party, the latest of which came May 15 when a highly popular navy admiral was demoted to a lower position through a presidential decree. The chief of staff of the Turkish navy, Rear Adm. Cihat Yayci, was the first high-ranking military officer demoted by presidential decree instead of at the biannual Supreme Military Council. The admiral resigned May 18, responding to his demotion with a loaded resignation letter.

The demotion has drawn sharp criticism from many corners, particularly Turkey’s influential anti-Western and Euroasianist quarters, with some arguing that Yayci’s resignation would only make Turkey’s foreign and domestic enemies happy. The move has stunned even pro-government media with some figures calling on Turkish President Recep Tayyip Erdogan to reverse the action.

Yayci has been a high-profile admiral and has been called an influential military analyst and scholar when it comes to Turkey’s geostrategic orientation.

As a prominent and popular figure within Turkey’s increasingly influential anti-Western fold, Yayci is also known as the architect of the ambitious Turkish agenda in Libya, the eastern Mediterranean and the Aegean sea. He is said to be the mastermind behind the controversial demarcation pact Ankara reached in November with one of Libya’s two main warring parties, the Government of National Accord; Yayci has been advocating such a deal since his doctoral student years. Erdogan personally praised Yayci’s role in the agreement.

Yayci has long been a vocal advocate of the “Blue Homeland” concept, a political-military agenda that suggests Turkey has to aggressively protect its maritime borders in the Black Sea, the Aegean Sea and the eastern Mediterranean at all costs and by all means.

Yayci has occupied a special place in the Turkish government's fight against the Gulenist network, which Ankara accused of masterminding the botched coup attempt in 2016. The algorithm used to point to alleged Gulenists in the navy ranks has been his trademark.

Yet Yayci’s demotion was not completely unexpected. Turkish Defense Minister Hulusi Akar’s displeasure with Yayci’s rising profile became clear when the former kept the admiral from a meeting at the presidential palace although he was invited. As I explained in Al-Monitor in January, the incident was a showcase of personal relations’ triumph over institutional ties in civilian-military relations in Turkey.

Yayci’s demotion and ensuing resignation has indicated that the personal ties between Erdogan and Akar still remain strong. Akar and Chief of General Staff Yasar Guler’s annoyance at Yayci's rising public profile has not been a secret for the past two years. Thus, my estimation was that Yayci would be retired by the Supreme Military Council to be held in August. His demotion before the council meeting shows a lack of patience in the military ranks, highlighting the complicated nature of relations in Turkey’s defense and security sector.

Traditionally the Turkish military disfavors “star” generals or admirals. Indeed, two high-profile generals suffered similar fates in recent years. Maj. Gen. Zekai Aksakalli, the former commander of the special forces, was demoted after he gained widespread publicity for his role in suppressing the 2016 coup attempt and as the commander of a Turkish military operation in Syria in 2016. Similarly, Gen. Metin Temel, the commander of Turkey’s Operation Olive Branch in northern Syria, paid the price for his popularity by getting demoted.

However, both those generals assented to their new duties and continued to serve in the army, while Yayci resigned, writing that his demotion was “unacceptable.”

Aside from its underdeveloped institutional structure, the resignation also reveals the widening internal rifts and power struggles within the Turkish military's ranks. Although Akar and Guler and land forces commander Gen. Umit Dundar work in relative harmony, navy admirals have traditionally been more outspoken and tough-minded. The failure of the naval forces commander, Adm. Adnan Ozbal, to manage the friction between Akar and Yayci might be another reason for the tension.

Erdogan, for his part, remained silent about Yayci’s resignation despite having publicly praised his work several times and calls by some pro-government figures to have the Defense Ministry reject his resignation. Erdogan’s inaction indicates that he felt the need to distance himself from the anti-Western front at a time when Turkey needs its Western partners’ support due to its increasing dependency on Russia and the blows COVID-19 has delivered to the economy

Turkey needs to counterbalance Russia, particularly in the Syrian and Libyan wars where the two actors support rival parties. Also, Ankara has been holding swap line negotiations with the United States and several European capitals in a bid to alleviate the outbreak’s impact on the Turkish economy.