Popular Turkish commander Gen. Metin Temel was suddenly removed from his post along with another general when he expressed doubt over a planned operation in Syria. 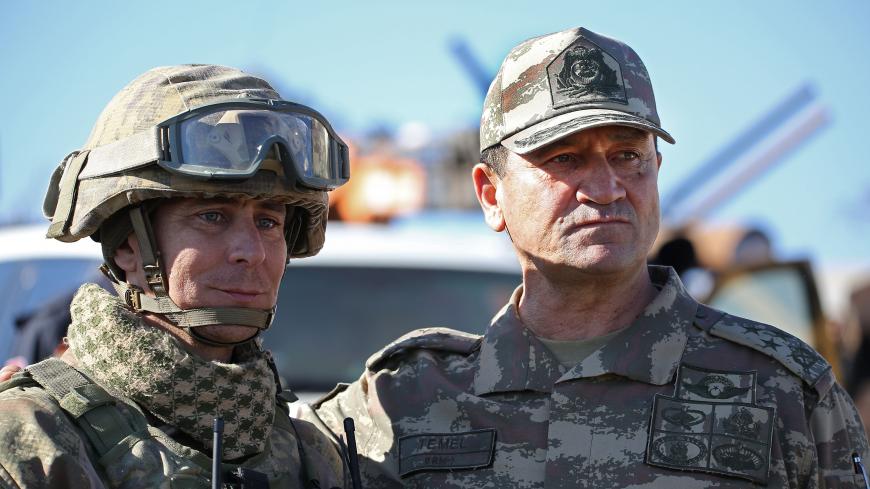 With Turkish forces poised for a new operation in Syria, some last-minute moves within Turkey's upper military ranks have people puzzled.

Two generals were abruptly removed from their posts Dec. 31 and assigned to desk jobs. Gen. Metin Temel, commander of the Second Army, and Brig.-Gen. Mustafa Barut, commander of the Fourth Commando Brigade, were both reassigned by presidential decree to the Evaluation and Inspection Division of the Turkish General Staff.

The high-profile and popular Temel, known for his fierce anti-US and nationalist stances, was responsible for counterterror operations in Turkey and ongoing operations in Iraq and Syria.

The Turkish public was shocked by the demotions, as Ankara is planning an operation in Kurdish-controlled areas east of the Euphrates River. Temel, with his firm stand against the 2016 coup attempt and his successful command during Turkey's operation in Afrin, Syria, was a rising star adored by the public. He also was known to be very close to President Recep Tayyip Erdogan.

When Turkey’s opposition criticized Temel for applauding Erdogan in uniform during the campaign before the June elections, Erdogan responded by expressing full confidence in Temel and stating how close they were.

In August, Temel was promoted to four-star general by the Supreme Military Council. Many in Turkey believed Temel was destined to become chief of staff and then defense minister.

But those expectations collapsed overnight when Temel was removed from his post.

There are several possibilities behind his demotion circulating in Ankara. One theory notes there was already tension between Temel and Defense Minister Hulusi Akar and other top generals because of Temel’s excessive independence. His direct contact with the presidency, bypassing the command chain, caused some antagonism that peaked when Temel was absent from a medal ceremony in mid-December. He reportedly refused to attend the ceremony because the personnel he had nominated were not receiving medals. He was said to be particularly peeved about Barut being omitted.

There are rumors in Ankara's military circles that Chief of Staff Yasar Guler had issued an ultimatum to Barut to choose between Temel or him, and Barut chose to stand with Temel. Guler wants to keep Turkey's options open with the Americans, while Temel is adamantly opposed to trusting the United States in Syria. At the same time, Temel interpreted US President Donald Trump’s abrupt decision to withdraw US troops from Syria as a trick that would leave Turkey responsible for keeping the Islamic State contained. Temel had drawn attention to the risk of clashing with IS deep inside Syria, far from Turkey’s border. He said Turkey shouldn't be pressured to undertake such a risky operation.

Another popular idea is that mistakes were made during the Afrin operation and that the operation was terminated early. Akar and Guler also have deep differences with Temel over the expected Syria operation against Kurdish organizations that Turkey considers terrorist groups.

Temel wants Ankara to have no part in cooperating with the United States in northeast Syria. He thinks that because Kurdish forces there get substantial US support and are well equipped and trained, it would be risky to launch a mid-winter operation there while relying on confusing and undependable messages from the United States.

In short, Temel was reported to oppose at all costs a northeast Syria operation with US cooperation that he believed can only be a trick. In reaction to Temel’s views, Akar and Guler nixed the idea of Temel leading that operation.

It's obvious that Akar and Guler don’t want Temel and his team among Turkey's top brass. But how did they get Erdogan to approve Temel's removal?

The answer lies in Erdogan's pragmatic attitude as he's busy preparing for the March 31 local elections.

How will Temel react? According to Turkish military traditions, a general's reassignment to such a post is a clear message to resign. But to do so would be against his character.

I have known Temel since he was a colonel. I strongly believe he won't resign before the Supreme Military Council meets in August, when it could decide to send him into retirement. Some sources in Ankara who spoke on condition of anonymity voiced similar views: Temel still has a strong standing with Erdogan and even if he retires from military service, he may be given important political or administrative duties.

Akar and Guler might have won the first round, but Temel, with his strategic moves and close ties to Erdogan, could still assume a critical post in the security bureaucracy.