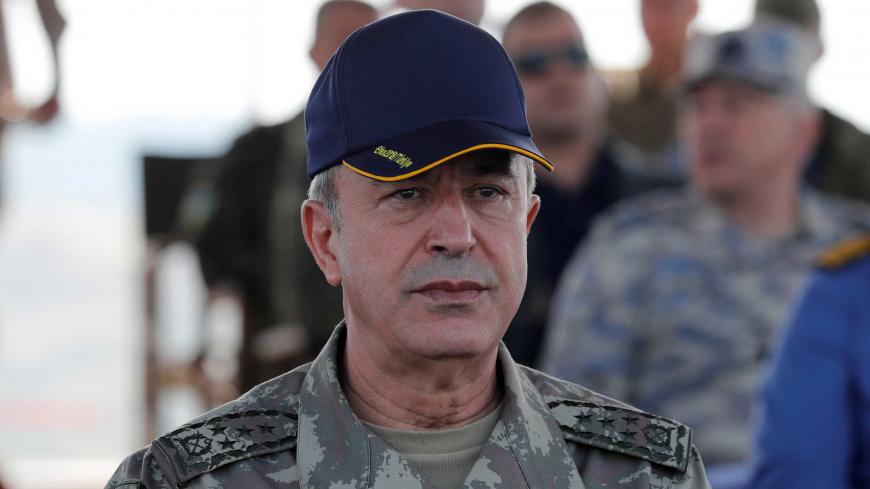 Turkey's Chief of General Staff Hulusi Akar is seen during the EFES-2018 Military Exercise near the Aegean port city of Izmir, Turkey, May 10, 2018. - REUTERS/Osman Orsal

As with politics in most countries, it pays to have friends in high places in Turkey.

Turkey held its first Supreme Military Council meeting under the new presidential regime Aug. 4. In accordance with the new constitution, the ministers of treasury and finance and education attended the meeting for the first time. The council, which comes together twice a year, decides on the promotions and retirements of colonels and generals in the Turkish Armed Forces (TSK). This year, civilian members of the council outnumbered military members for the first time because of the new participation of the two ministers.

The most significant outcomes of the meeting were promotions awarded to officers close to new Defense Minister Hulusi Akar, who was chief of general staff, and the retirement of those who aren't close to him.

The majority of the colonels promoted to general had worked with Akar before. With this, Akar — who already had close ties to new Chief of General Staff Yasar Guler and other force commanders — further consolidated his control over the TSK.

In a July 18 opinion piece, I emphasized that the mutual confidence between Akar and President Recep Tayyip Erdogan will rebuild civilian-military relations. The supreme council’s latest meeting confirms this, as well as the influence of the close relations between Akar and Guler. Akar will play a key role in sustaining this harmony.

Contrary to rumors circulated last year that he would soon get retire, Akar has become the oldest and therefore the most senior member of Erdogan’s first Cabinet under the new presidential system. His was also the most-applauded name during Erdogan’s announcement of the new Cabinet at a July 9 inauguration ceremony.

On April 4, then-Chief of General Staff Akar, accompanied by presidential spokesman Ibrahim Kalin, made headlines when they visited former President Abdullah Gul, reportedly to ask him not to run in June 24 elections.

It's still not clear whether Akar received Erdogan's kudos after that visit. But it's clear that if the meeting took place with Erdogan’s knowledge, it shows how much confidence Erdogan has in Akar; if Erdogan didn't know about it in advance, that indicates Akar’s power.

Akar will serve as the most significant informal checks-and-balances mechanism on Erdogan, who appears to be totally immune from any formal kind under the new regime. Akar will be seen as the most prominent minister in the Cabinet, as Erdogan prefers to share his car with him in their travels and have him sit or stand closest during various meetings and events. Akar also accompanies Erdogan during his foreign travels.

Akar’s stance on the night of the botched military uprising in July 2016, his uncompromising struggle against the separatist Kurdish militants in Turkey and his "tough soldier" image have boosted his popularity with the majority of the public as well, particularly in the conservative and nationalist circles that constitute the ruling party’s power base.

Yet what makes Akar so influential — a "first among equals" — in the new Cabinet? First, since his high school years, Akar has had good relations with conservatives. Gul is among his close friends, as both spent their childhoods in Turkey’s central Anatolian province of Kayseri.

Could this association with the right wing explain his current strong standing in the Cabinet? I think many factors are at play in this, including his seniority, his former service as chief of general staff and his close ties with the Justice and Development Party’s (AKP) conservatives.

Other major factors could be his affinity for the nationalists and personal friendship with Erdogan’s election partner Devlet Bahceli, leader of the right-wing Nationalist Movement Party (MHP) — who, after all, was the unexpected major winner of the June 24 elections.

Bahceli undoubtedly played a key role in paving the way for Erdogan's new presidential system by forming an alliance with the AKP. Although the two preserve their alliance, Bahceli didn't demand a ministerial portfolio for the MHP or a vice presidential post for himself. In other words, today neither Bahceli nor the MHP are integral parts of the executive branch. Bahceli’s remarks after the June 24 elections offer a clue to the mission he is defining for himself and his party: “The Turkish nation won the June 24 elections. Those who had plots against Turkey once more suffered a blow. The Turkish nation has erased systemic impasses. We will work hard with determination to properly fulfill the duty of balances and audits given to us by the Turkish people.”

In other words, Bahceli has opted to act from outside the Cabinet, without seeking a direct say. Akar, with his close relations with Bahceli, has become another element in the informal checks-and-balances system, as the “big, compassionate brother” of the new Cabinet.

That's why I don’t totally agree with analyses that frequently make headlines in the Western media, asserting that Erdogan has fully consolidated his power in Turkey and that he controls everything with no restraint. Such conclusions overlook the informal but functioning checks-and-balances mechanism. One can ask, then, whether the alliance between Erdogan and Turkey’s nationalists means the “Erdoganification” of the Turkish state or “state-ification” of Erdogan.