A mountainous indictment in Turkey's coup attempt case leaves a lot to the imagination despite its heft. 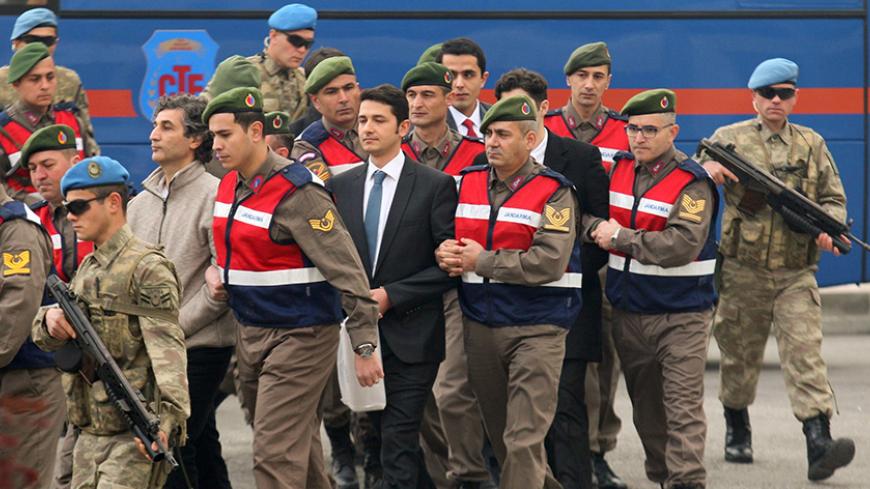 Turkish soldiers accused of attempting to assassinate President Recep Tayyip Erdogan on the night of last year's failed July 15 coup are escorted by gendarmes as they arrive for the first hearing of the trial in Mugla, Turkey, Feb. 20, 2017. - REUTERS/Kenan Gurbuz

Despite a recently issued 2,700-page omnibus indictment, many questions remain unanswered about the July 15 military uprising in Turkey. The parts of the indictment supported by telephone records and camera recordings, and the documents that reached the news media, answer many questions but also leave some critical ones untouched.

About 221 suspects stand accused of participating in the incidents at the chief of staff headquarters. Lawyers who have seen a copy of the indictment told Al-Monitor it will be the basis of other indictments that will follow. The first part of the document broadly summarizes the background of the military uprising and coup attempt, and systematic efforts of the Gulen movement to infiltrate the military since the 1980s. In the rest of the document, preparations for the uprising are summarized with corroborative evidence, testimonies of the suspects and victims, telephone records, and military and civilian documents. It also identifies 38 members, all at the rank of lieutenant colonel and higher, as being in the “Peace at Home Council,” the alleged brain trust of the coup.

Reports say a separate indictment is being prepared regarding Akinci air base near Ankara, which emerged as the central base of the coup where most of the council members operated. With this indictment, the relationship between the Peace at Home Council and the Gulen movement is to be fully exposed.

The omnibus indictment names Kemal Batmaz, Harun Binis Hakan Cicek and Adil Oksuz (who is still on the lam) as the civilian pillars of coup operations at Akinci and claims they were even issuing instructions to generals that night.

What is revealed in this massive indictment? First of all, we learn the timeline of the coup attempt. It says the military and civilian coup plotters began meeting in Ankara’s Umitkoy area — in a villa rented by a consultancy company linked to Turkish cleric Fethullah Gulen — just eight days after the general elections of Nov. 1, 2015. Therefore, the results of the Nov. 1 elections, won by the Justice and Development Party by a landslide, were probably the first motivator of the coup attempt.

The indictment says academic Adil Oksuz, who was allegedly the main liaison to the US-based Gulen, was actually apprehended at the Akinci air base the morning of July 16, but was somehow released for unknown reasons. Oksuz, according to the document, visited the air base and met with officers a dozen times between Dec. 27 and July 15. It also says that between December 2013 and July 2016, Oksuz traveled abroad 12 times, the latest being when he returned from the United States three days before the coup attempt.

Also from the indictments, we learn that Turkey's National Intelligence Organization (MIT) gave the chief of general staff the names of 300 high-ranking officers who were using Bylock, a smartphone messaging app Gulenists used for their secret communications. It is not hard to guess that Gulen-linked officers who were working as aides-de-camp, consultants and in critical human resources and intelligence posts at the headquarters were seriously disturbed by the MIT lists.

The indictments said 63% of colonels who were promoted to brigadier/rear admiral ranks in 2014 and 2015 were discharged after the July 15 coup attempt and 13% resigned. It's clear that in 2014 and 2015 there had been a concerted effort to promote colonels and generals linked to the Gulen movement to the most critical posts of the Turkish Armed Forces (TSK).

The indictments note that the plotters got wind of the Supreme Military Council's preparations for a major purge in August of officers linked to Gulen. It was fear of this mass purge that compelled the Gulenists to move up the date of the coup attempt without fully preparing for it. The indictment includes a handwritten note from Gen. Mehmet Partigoc, a key name associated with the coup, to his wife and daughters in which he wrote: “My dear wife, I love you more than anything. But if I had not taken part in this uprising, they would have imprisoned me for the rest of my life. Forgive me."

The small percentage of weapons and military equipment used in the coup attempt also indicates the decision to proceed was made suddenly.

The indictment says 8,651 military personnel, including 1,676 privates and 1,214 cadets, took part in the coup attempt. "That corresponds to 1.5% of the total personnel strength of the TSK, further indicating that the vast majority of the TSK had strongly opposed this treacherous coup attempt," it said. The indictment also stated that 7% of TSK planes (35, including 24 combat planes) and 8% of its helicopters (37, including eight attack helicopters) joined the coup. In tanks and armored vehicles, the overall participation was 2.7%, of which 246 were armored vehicles and 74 were tanks. In the navy, only 1% (three vessels) participated.

The state was alerted to the coup attempt when a helicopter pilot major — who was supposed to help capture the head of the national intelligence, Hakan Fidan — came to MIT headquarters around 2:45 p.m. on July 15 and reported the coup was coming.

It is clear from the indictment that neither Fidan nor Chief of General Staff Hulusi Akar were expecting such an organized uprising. Around 6:30 p.m., Akar banned all flights in Turkish air space to keep commando brigades from moving to Ankara. This is when the focus of the coup shifted from the army to the air force.

In the indictment, Akar testifies that negotiations with coup leaders at chief of staff headquarters and Akinci air base continued until 12:30 p.m. the next day. What we are not told is what was discussed in those negotiations and whether any of the coup planners' demands were accepted.

Those questions are among many the 2,700-page indictment has not answered:

It looks like we will have to wait a bit longer to find the answers to these and more questions.