Erdogan's crackdown on enemies just getting started after failed coup 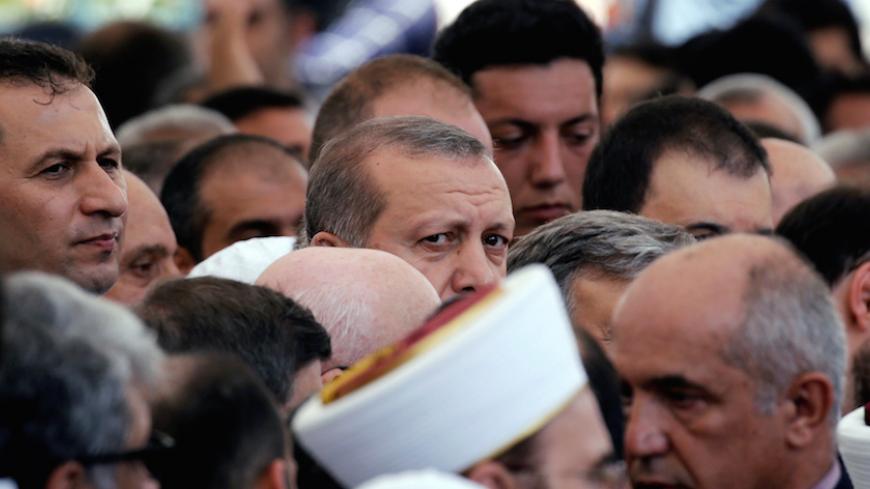 Turkish President Recep Tayyip Erdogan attends a funeral service for victims of the thwarted coup in Istanbul at the Fatih Mosque in Istanbul, July 17, 2016. - REUTERS/Alkis Konstantinidis

On July 23, Turkish President Recep Tayyip Erdogan closed thousands of charities and private schools as he expanded his crackdown in the aftermath of the failed July 15 coup. A restructuring of the military is also in the cards. Kadri Gursel reports that 35% (124 of 358) of the generals and admirals in Turkey’s armed forces (TSK) have been arrested, and that the coup was “widespread” with “nationwide tentacles.” He writes that, except for the Turkish navy, “it would not be an exaggeration to estimate that between one-third and one-half of forces on the ground had joined the uprising at various levels.”

Erdogan has signaled that the coup aftermath will likely be a final reckoning for cleric Fetullah Gulen and his followers. The Gulen movement and the Justice and Development Party (AKP) had at one time been allies in advancing the AKP’s Islamist agenda, including purges of alleged Kemalist elements in the TSK. During these years, Gulen followers expanded their influence among the judiciary, police and armed forces. This was fine with AKP rulers until 2013, when Gulen fell out with Erdogan, then prime minister, who subsequently began a widely publicized purge of Gulen loyalists in the judiciary and military.

Gursel writes, “Of the 124 generals and admirals detained, 83 are brigadier generals and rear admirals. As far as can be determined, about half of them were promoted to the rank of brigadier and rear admiral in 2013 and later. This indicates that most of the generals who today are accused of coup plotting were promoted to fill the ranks vacated by their colleagues who were purged in the Sledgehammer and Ergenekon cases. It can't be a coincidence that they constitute the majority of the plotters of this failed coup.”

In addition to the Gulenists, those in the armed forces involved in the coup included “pragmatists who joined the plotters for career advancement and personal interests; soldiers who had to join under pressure or blackmail; and lower-ranking soldiers who couldn’t defy orders because of the TSK's absolute-obedience culture,” as Metin Gurcan reports.

Gurcan adds that the timing of the coup may have been related to a Supreme Military Council meeting scheduled for the first week in August to decide on senior military promotions and appointments. Gurcan wrote in August 2015 that then-newly appointed Chief of General Staff Gen. Hulusi Akar had been tasked to weed out Gulenists in the TSK as part of a broader purge authorized by the AKP.

An Al-Monitor correspondent who was an eyewitness to the failed coup and its aftermath writes, “The coup attempt was not the work of a small group of renegades, and the plan was not amateurish. The coup plotters had support from all segments of the armed forces and managed to seal all Turkey's borders. The coup was stillborn due to the efforts of the MIT [Turkish Intelligence Service], rather than simply failing on its own after being launched. … One unanswered question is why, despite knowledge of an imminent coup attempt, it was the police and members of the public — rather than the rest of the armed forces — who were on the streets trying to stop the F-16s and tanks. The coup was not an Erdogan plot, but if he succeeds in fully suppressing the takeover attempt, his hold over power will deepen. Mainstream media in Turkey have been instrumental in rallying support for Erdogan. Their unconditional support has prevented anyone from questioning the government’s calls for the public to attend rallies for democracy.”

Gursel concludes that the outcome is devastating for Turkey’s institutions and regional standing: “This TSK, infested with Gulenists, was not the national army of Turkey. The [Gulenist] Congregation had become an army within an army. In addition, the TSK is a NATO army. Any crisis, any weakness in its command and performance would also be a NATO crisis. The TSK is in a historic crisis and decline.”

Erdogan is also keeping score with regard to the international response to the attempted coup and its aftermath. One possible outcome is an improvement in relations with Russia and Iran, as the Turkish government and media have been less than satisfied with the responses of the United States, the European Union and certain Arab countries, as Fehim Tastekin reports. Turkish officials and pro-government media have even alleged a possible US role in the coup, and Erdogan will be sensitive to Western criticism of his crackdown.

On July 22, US President Barack Obama condemned the coup attempt and rejected allegations that the United States had any advance knowledge of it. The US-Turkish relationship may be put to the test if Turkey formally requests Gulen’s extradition.

Iran seems to have benefited from its clear stance on the failed coup. Ali Hashem explains why Iranian leaders quickly and unequivocally opposed the coup and backed Erdogan as head of Turkey’s democratically elected government. Iran’s support came with a reminder, however, that Tehran hopes for a turnaround of Turkey’s Syria policy. Hashem reports that Ali Akbar Velayati, foreign policy adviser to Iran’s Supreme Leader Ayatollah Ali Khamenei and a former foreign minister, said while condemning the coup that he hopes “’the Turkish government will respect the views and votes of the Syrian people and allow them to decide their own government.’” Hashem adds, “It was a clear message from Iran to Turkey regarding Syria and the future of the struggle in the region. For five years now, Iranian officials have on repeated occasions stated that they have been trying to engage the Turks on a path to address the situation in Syria, and while unsuccessful, have never given up on this approach.”

Mahmut Bozarslan reports on Turkish state documents that reveal previously unknown details of Islamic State operations in Turkey. For example, “The IS emir in Turkey is Halis Bayancuk, also known as Abu Khazanla; at one point he was detained, but then released. His father, Haci Bayancuk, was a high-level official of Hezbollah in Turkey. Halis Bayancuk is the senior official of radical structures in Diyarbakir, which operate primarily in four locations: Madrasa/Masjid, Takwa Education and Reading Hall, Tavhid Bookstore and Dar-ul Erkam Reading Room. These locations focus on converting youths who are not deeply religious and then join the organization.”

Bozarslan describes the operations of the IS transportation network: “Those who want to come to IS territory have to acquire a reference, known as “tazkiye,” from an emir of the organization. That emir then sends the names of the people who will come to IS customs units to arrange the border crossing. The IS sponsor emir instructs potential recruits to go to Gaziantep by plane or by bus. The customs units convey the names of those coming to border emir Ilhami Bali. This is when the transport network Bali has set up on the Gaziantep-Kilis-Raqqa axis gets into action. Jihadis contact Bali after reaching Gaziantep. They are told to take a taxi and go to a meeting point determined by the organization. At that point, the newcomers meet a liaison agent and are taken to IS guesthouses in Gaziantep and Kilis. Any personal belongings that may hinder their border crossing are taken from them and kept for safekeeping at a warehouse whose location hasn’t been found yet. Then Bali sends one of nine taxi drivers working for him to bring jihadis and their families to the second meeting point at the town of Elbeyli. Taxis are paid 40 Turkish liras per jihadi. These people are taken across the border by a smuggler named Huseyn Hano. Police determined that women among the newcomers are taken to a women’s guesthouse under the control of Deniz Buyukcelebi, alias Abu Enes, while the men are taken to a camp at Tel Ahmar. Newcomers are allowed to bring a maximum of two suitcases per person. Belongings initially stored in Turkey are later sent to Tel Ahmar. … Ersen Celik, alias Abu Mousa, the IS official responsible for technological affairs, provided information previously unheard of after he was apprehended in Gaziantep. Celik said IS is trying to build a hydrogen bomb and is planning to launch attacks using remote-controlled model planes in Turkey. Celik first came to Turkey in 2014 to buy model planes and left. He was arrested after his return to Turkey.”