The Sledgehammer coup case, which has ended with the acquittal of all defendants, inflicted enormous damage on Turkey’s justice system, judiciary and military, while failing to eliminate the danger of military coups. 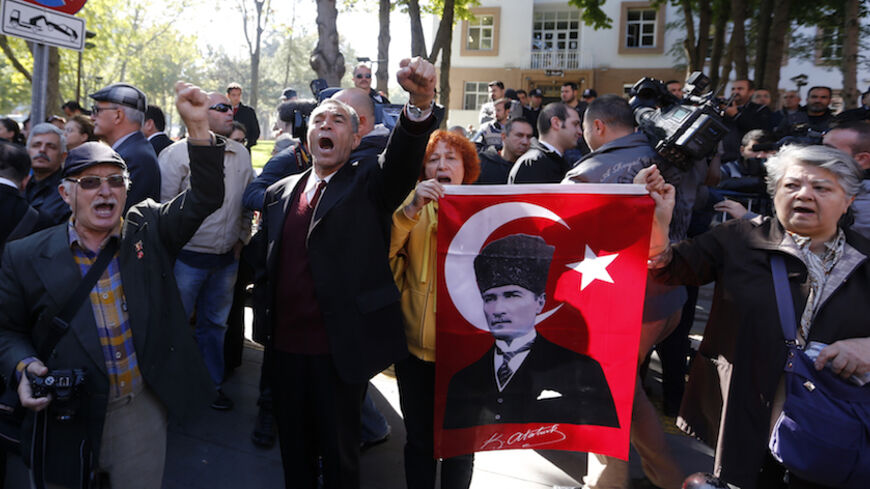 Relatives of military officers detained in the Sledgehammer case hold a portrait of Mustafa Kemal Ataturk, the founder of modern Turkey, and shout slogans in front of a courthouse in Ankara, Oct. 9, 2013. - REUTERS/Umit Bektas

The legal saga of the alleged "Sledgehammer" coup plot in Turkey, a political scheme by the ruling Justice and Development Party (AKP) and its allies to permanently disable the military’s ability to intervene in politics, ended March 31, when all defendants were acquitted. The 236 suspects — almost all military officers, including 86 generals and admirals, some of them retired — had been initially convicted to lengthy jail terms. They were declared innocent after the state's evidence was dismissed as invalid. Arrested in 2010 and 2011, most spent three to five years in jail before being released on June 19, 2014, pending a retrial.

Today, only one person remains behind bars in connection with the Sledgehammer case. This person, however, is not a defendant accused of plotting a coup but a figure who played a key role in exposing the case. This person is Taraf columnist Mehmet Baransu, who, back in 2010, famously delivered to prosecutors a suitcase full of documents on which were based the ensuing Sledgehammer arrests and trials. Imprisoned since March 2, he is now accused of “setting up a criminal organization” and “disclosing information that the state’s security and internal or external political good requires be kept secret.”

Everything about Sledgehammer has turned upside down. The suspects are cleared, while the police and judicial officials who put the soldiers in the dock — both in the Sledgehammer case and other similar probes — have lost their offices, powers and special courts.

Those police and judicial officials were known to belong to the Fethullah Gulen community, an Islamic movement that has entrenched itself in key positions within the state. Yet, Gulenist involvement alone cannot explain the Sledgehammer and similar cases. All of those probes and trials were carried out with the blessing of the AKP government and the active support of the pro-government media.

The Sledgehammer defendants were able to walk free not because the evidence against them was belatedly recognized as the fabrication the defense had claimed for years, but because of the open civil war that broke out between the AKP and the Gulen movement after the December 2013 corruption probes, which were attributed to the Gulenist network in the police and the judiciary. In remarks that went down in Turkish political history, Prime Minister Recep Tayyip Erdogan’s chief adviser, Yalcin Akdogan, declared at the very outset that Sledgehammer was a “plot hatched against the national army” and blamed the Gulen movement.

Erdogan and his party, direct targets in the corruption probes, sought to narrow the battlefront by drawing the military to their side or at least pushing it into a neutral position. Turkey's military got the message and in December 2013, the General Staff filed a criminal complaint on the basis of Akdogan’s remarks. The issue was taken to the Constitutional Court, which ruled June 18 that the defendants’ right to a fair trial had been violated. A retrial was called for the following day and the 236 convicts were released from prison. All were acquitted in the ensuing retrial on March 31.

It is now time to calculate what the Sledgehammer case has cost Turkey. How did it impact the Turkish legal system? Did it contribute to Turkey’s democratization? Did it help create the conditions in which the military’s meddling in politics has truly become impossible? To answer these questions, one needs to go back to the very beginning and recall how the case was engineered and conducted.

It all started on Jan. 20, 2010, when Taraf began publishing documents it claimed were coup plans the military had drawn up to topple the AKP government. The documents — thousands of pages and a number of CDs — were delivered to Baransu in a suitcase. Their content was mind-blowing. The military was planning false-flag bombings at Istanbul’s Ottoman-era Fatih and Beyazit mosques in a bid to foment chaos. It was plotting to down one of its own jets in the Aegean and then blame it on Greece to spark a crisis and force the government to declare martial law. It listed the associations to be closed, pharmaceutical warehouses to be seized and journalists to be arrested. It even listed the journalists it hoped would be instrumental for the junta.

On Jan. 30, Baransu handed over the papers and 19 CDs, said to have been taken from the First Army headquarters in Istanbul, to prosecutors, again in a suitcase. On Feb. 22, 2010, police rounded up the first batch of officers whose names appeared in the coup documents. Several other waves of detention followed. By 2012, NATO’s second-largest standing army had 37 of its 348 active-duty generals and admirals in jail, including those arrested in the earlier Ergenekon probe and other coup-related investigations.

The digital evidence that landed the suspects in jail was proven to be forged long before they won the right to retrial. Pinar Dogan, daughter of the alleged coup mastermind, retired Gen. Cetin Dogan, and her husband, renowned economist Dani Rodrik, did what the press was supposed to do and exposed how the Sledgehammer coup plan, allegedly drawn up in 2003, had been put together in 2009 at the earliest. According to the expertise report the prosecution presented, CD No. 11, for instance, was ostensibly created in a single computer session on March 5, 2003, for Gen. Dogan, First Army commander at the time, with no additions or redactions made later on. The coup plans on the CD, however, mentioned associations founded in 2006, public offices inaugurated in 2005, license plates issued in 2006 and pharmaceutical companies established in 2009. It also contained texts using fonts that Microsoft Office offered in 2007, including the mosque-bombing plan.

During the retrial, the prosecution demanded the suspects' acquittal, saying, “The digital evidence in the case does not qualify as evidence and no link can be established between the suspects and the evidence attributed to the charges” — a conclusion that a professional, neutral and independent judiciary could have reached years ago.

Huseyin Ersoz, a lawyer who represented several Sledgehammer defendants, believes the case has deeply scarred the Turkish judiciary’s credibility. “The Sledgehammer case was a legal process in which modern legal norms such as the right to a fair trial, the right to defense and legal security were virtually shelved and replaced with systematic legal breaches, which are known as ‘enemy criminal law’ in the doctrine,” Ersoz told Al-Monitor.

“The Sledgehammer case made the most destructive impact by shaking the absolute faith in the neutrality of judges and prosecutors. Turkish citizens today have come to ponder whether the judge in the bench sympathizes with the government or the [Gulen] community. What the Sledgehammer case has left behind is a perception of a politicized justice system, with the reputation of the judge’s profession badly damaged,” he added.

Erdogan today, as president, appears to reject any responsibility for the damage Turkey’s judiciary and legal system has suffered, blaming it all on the Gulen community. Speaking at the Military Academy on March 20, for instance, he said, “The entire country, including myself in particular, was misled and deceived with those operations. We were subjected to a plot orchestrated by an entity, entrenched within state institutions and equipped with strong media support, which sought to take hold of Turkey.”

Prominent jurist Turgut Kazan disagrees. “Turkey’s legal system had never functioned properly, but it was entirely screwed up in this period. There is no longer a [real] judiciary in Turkey. They wanted to disable [the military], thinking it would cause them trouble in the future, and employed hitmen in the guise of judges. Now they are looking for new hitmen who will serve only the president,” Kazan, the former head of the Istanbul Bar Association, told Al-Monitor.

Kazan added, “The special courts were not really courts, but criminal organizations to the extent that they engaged in forgery and became part of all that. They issued life sentences, knowing perfectly well that the evidence was fabricated. Those sentences were ordered from Pennsylvania [where Gulen lives] and had Erdogan’s approval.”

The Sledgehammer case undermined not only the judiciary, but the Turkish armed forces as well.

In remarks to Al-Monitor, Ahmet Yavuz — the major general who was arrested in 2011 while heading the Land Forces Military Academy, sentenced to 18 years in jail and forced into retirement before being released last August and then acquitted — offered an overview of how the military was weakened: “The Sledgehammer case was not a coup trial. It was a blow delivered on the army that shattered its officers’ moral and military authority. An army officer today is not a respectable figure in the public eye. The army officer’s command capacity is also negatively affected, for his professional capabilities, too, have become questionable in the public eye. The Sledgehammer case also dealt a blow to the spirit of comradeship. It damaged [the soldiers’] trust in the upper echelons and eroded their self-confidence.”

Now, we can answer the questions raised above.

The Sledgehammer case has dealt enormous damage to Turkey’s judiciary and legal system. Democracy cannot live without justice. Contrary to what many expected, demilitarizing politics did not bring about more democracy per se. Compared with 2010 and 2011, Turkey’s international image today is one of a country further away from democracy and under authoritarian rule.

The only way to stop the Turkish military from intervening in politics is to build a sound democracy. As Turkey drifts away from democracy, the growing authoritarianism, coupled with rising instability and conflict, prevents us from ruling out fresh military interventions in politics. The Sledgehammer case has failed to reduce the possibility of military coups.