The Supreme Court of Appeals confirmed that the military actually planned to carry a military coup, but it failed to convince the general public that the country’s democracy benefited from this trial. 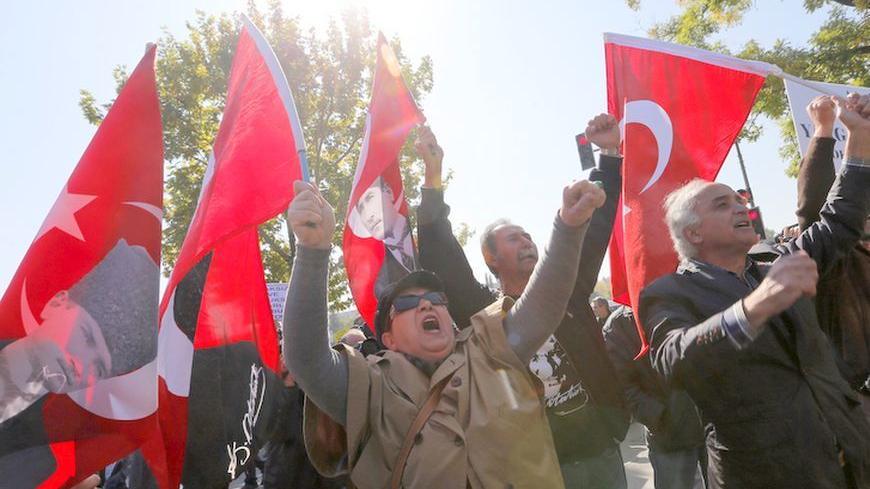 Relatives of detained military officers shout slogans in front of the Chief of Staff Headquarters in Ankara, Oct. 9, 2013. - REUTERS/Umit Bektas

On Wednesday, Oct. 9, the Supreme Court of Appeals affirmed a lower court ruling confirming that some Turkish military officers had planned a coup to bring down the Islamist-based Justice and Development Party (AKP) soon after it came to power in November 2002.

The evidence of this coup plot — which did not go beyond the planning state and apparently was hatched at a March 5-7, 2003, military seminar — was delivered in a suitcase to the daily newspaper Taraf (which means “one taking sides”). Taraf’s staffers were known to be at war with the military’s role in politics, considering it the major stumbling block to democratization of the country. The suitcase contained numerous related and unrelated materials to the coup planning, but three CDs found in that suitcase formed the backbone of the prosecution’s case.

Taraf voluntarily turned over that suitcase in full to the state authorities, but started publishing what it had received from the anonymous source on Jan. 20, 2010. To this day the identity of the source who delivered the evidence to the paper remains unknown, even to the journalist who broke the story. The contents of the suitcase led to the end of the military’s role in civilian politics, a road paved by the historic trial that began on Dec.16, 2010.

With the code name Balyoz, or Sledgehammer, the scenario of the coup plot was simply horrifying. From the moment the allegations became public, the Turkish military worked in full cooperation with the state prosecutor’s office. However, the Turkish General Staff disputed in January 2013 reports in several pro-government media outlets claiming that the original documents of all evidence regarding the coup plot were found in the General Staff archives. The military stated flatly that it had no evidence to verify any of the contents of the three CDs that formed the basis of the coup plot.

The CDs contained documents that detailed what the Balyoz plot was, with subplots titled Oraj, Suga, Carsaf and Sakal. All look like quite chilling plans to provoke unrest within the population. There was also a list of civil society organizations to be shut down when the military took over, as well as a list of individuals — journalists, academicians, etc. — to be arrested, and vehicles, hospitals and pharmacies to be taken over. Accordingly, they planned the bombing of two major mosques in Istanbul and attacking a military museum, supposedly to imply that religious extremists were responsible, and raising tensions with Greece by attacking a Turkish plane and blaming the incident on the Greeks.

Although the plan was quite a detailed one, it lacked an original signature. It was, however, represented in these CDs that Cetin Dogan, 1st Army commander-general at the time, organized and led the seminar. Navy commander Ozden Ornek and air force commander Halil Ibrahim Firtina appeared to be the other two senior ranking officers at the seminar. All three were sentenced to 20 years imprisonment.

From the early days, those three CDs presented as proof of this plot had raised eyebrows. These CDs were said to have been burned in a single session in 2003, but consisted of characters and fonts from Microsoft Office’s Word 2007 program. Technically, it’s not possible to add even a comma on a burned CD, and the defense lawyers based all their arguments on this fact to try to prove the innocence of the military personnel, showing the technological inconsistency. The Supreme Court of Appeals decision, however, ruled that the technological inconsistencies were not enough to disprove the existence of the coup plot.

While it may also be legally sensitive to raise an opinion against a verdict, the following observations can still be made:

The silence of those serving in top positions in the military today could be interpreted to suggest that those three top commanders — Dogan, Ornek and Firtina — were actually up to something. In fact, in 2012, Aytac Yalman, land forces commander between 2002 and 2004, revealed that he tipped off Hilmi Ozkok, then chief of general staff, about preparations for a coup to bring down the government.

Indeed, thank goodness that no such horrifying plan was put into action. Yet the failure of Ozkok and Yalman to take immediate disciplinary action or whatever they could have done against those three commanders has cost the Turkish military dearly. At no time in history has a coup been planned by more than 300 people, but the Supreme Court of Appeals put 237 members of the military behind bars, convicted of planning the Balyoz coup plot.

Moreover, the public may be divided over the military’s role in politics and its impact on the evolution of Turkey’s democracy. However, they could have all united if the trial process had been conducted in a way convincing all segments of society that justice was dealt free of any political interference. Unfortunately, the public perception of the judiciary’s independence is that it is more questionable than ever; and that perception is today’s stumbling block to democratization of the country. Alas, a segment of the society keeps questioning the authenticity of those three CDs, and demands answers from the judiciary as to how it was technically possible to update a burned CD.

Sedat Ergin of Hurriyet in fact stresses this issue in his Oct. 11 column with detail:

In light of this verdict, we see several categories in terms of the consequences caused by the digital evidence.

In the "first group" is the situation of 33 of the 36 defendants who were acquitted by Istanbul's 10th High Criminal Court in September. All of them are gendarmerie officers and noncommissioned officers. … The court found these digital documents insufficient for forming the opinion that they committed a crime, consequently acquitting 33 of the defendants. The Supreme Court confirmed the court's decision.

Now, let's move on to the "second group." In this group, there are defendants who were sentenced by the Istanbul court because their names were mentioned in the digital documents; however, their sentences were reversed by the Supreme Court. Some of the 25 defendants who were released by the high court's decision fall into this category. … The Supreme Court's justification for their release is that there was no "adequate, concrete, convincing evidence to sentence the defendant."

Therefore, there is digital evidence present in the case file that the Supreme Court views with suspicion.

However, the digital evidence coming from the same sources has caused different consequences in other categories. These kinds of evidence were deemed convincing enough for some defendants to be handed prison sentences, and for some other defendants, they were deemed sufficient enough to be seen as tantamount to "agreeing to commit a crime," falling just short of the act of attempting a coup. These contradictions need to be highlighted.

Ali Sirmen of Cumhuriyet daily also spotlighted in his Oct. 11 column the identities of those judges of the Supreme Court of Appeals who decided the fate of those 237 military personnel: “The issue is not the identity of these judges, but the way they have been brought to this position. All five who ruled on the [Balyoz] case, were appointed to their current position after the Sept. 12, 2010, referendum which formed a special Judges and Prosecutors High Commission, which decided in six days the allocation of 5,900 personnel, reaching its decisions in less than 31 seconds per appointment.

"In other words, it was known that the Supreme Court of Appeals 9th Criminal Circuit Court would look into this case, and they appointed their friends there. In this light, is it possible to really talk about an efficient and independent judiciary?" In fact, four out of five judges who ruled on the appeals in the Balyoz case were appointed to serve at the Supreme Court of Appeals for the first time through appointment on Feb. 14, 2011.

This is all to say that this decision, unfortunately, has not convinced the general public in Turkey that the courts or the media addressed it independently of the political atmosphere in the country. People now debate about a potential general amnesty to be put in force in less than a decade, which may in the end help free the military personnel as well all jailed members of the Kurdistan Workers' Party (PKK), including its leader Abdullah Ocalan. For a planned crime that did not get realized, however, the court could have also decided even to let those three top generals free, and not equate the military personnel with the PKK, but they are now legally both convicted as "terrorists."

And that hurts the government’s main argument that the country is getting truly democratized under its administration. On the contrary, many worry that the lack of a truly independent judiciary system is going to create a real void in keeping the country on the track of democracy.

Put simply, Turkey may very well have missed yet another opportunity to perfect its democracy, and it is only the people who will ultimately pay a price for all those lost opportunities in the end.