Turkey’s Constitutional Court has decided the country’s military men did not receive a fair trial. 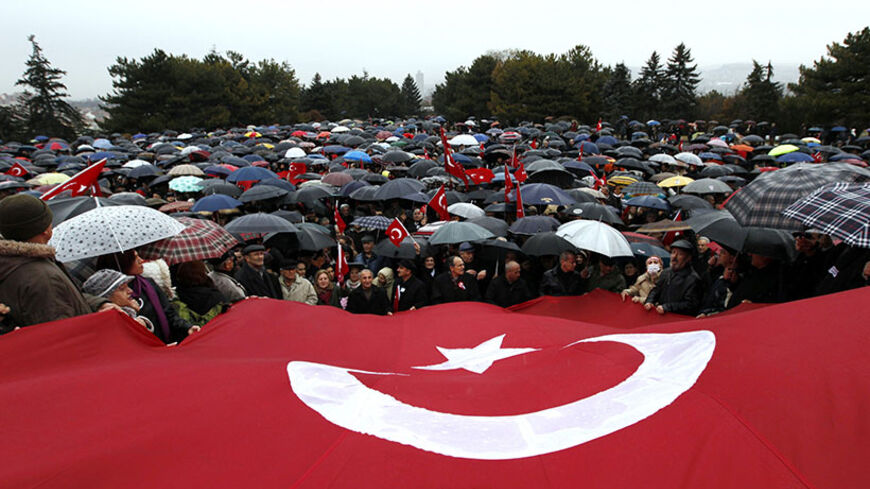 Wives and relatives of retired and active military officers charged in the so-called Sledgehammer trial march under a huge Turkish flag during a protest at Anitkabir in Ankara, Feb. 19, 2011. - REUTERS/Umit Bektas

Turkey’s Constitutional Court (AYM), the highest legal authority in the country, made a unanimous decision on June 18, ruling that the lower courts’ verdict — convicting retired and serving military officers of plotting a coup to bring down the pro-Islamist Justice and Development Party (AKP) government in 2003 under a plan code-named "Sledgehammer" — had violated their right to fair trial. Since this landmark decision, all 237 officers behind bars in relation to the Sledgehammer case have been released.

This case started in January 2010, when an unidentified person delivered a suitcase containing 6,000 confidential documents somehow taken from the 1st Army Command to journalist Mehmet Baransu of Taraf, a Turkish daily that has taken a sharp critical stance against the military since the paper's founding in 2007. The newspaper immediately published the story, which alleged that there were plans to blow up at least two major mosques during Friday prayers; assassinate some Christian and Jewish leaders; and shoot down a Turkish warplane and blame it on Greece, Turkey’s historic rival. Taraf reported that the conspirators hoped the chaos would lead to calls for a military takeover and planned to turn stadiums into open-air prisons capable of holding tens of thousands detainees. The paper turned all these documents over to the state prosecutor in Istanbul, forming the foundation of the Sledgehammer case.

Speaking after the judgment to Hurriyet and Milliyet, AYM President Hasim Kilic stressed the unanimous nature of the court’s decision, which upheld the importance of basic rights and freedoms. “With the Constitutional Court’s ruling that their right to fair trial is violated, this case will be [rebuilt] from scratch,” he said. “We found discrepancies in the assessment of the local court in analyzing the CDs, hard discs and similar materials as evidence. We determined those discrepancies as a violation of rights. Moreover, we also decided the court’s refusal to hear two key witnesses was an abuse of rights. We were not convinced of the rightful decision-making of the court while denying the repeated request of the defense teams for them to listen to then-Chief of General Staff Gen. Hilmi Ozkok and Land Forces Commander Gen. Aytac Yalman. We were not also satisfied with the reasoning at the Court of Appeals.”

Irem Cicek, the daughter and lawyer of one the former Sledgehammer convicts, navy Col. Dursun Cicek, told Al-Monitor that once the new trial process started and the court ordered an expert report on the digital evidence, the case would be automatically dropped and that it won’t take years. Three CDs found in the suitcase delivered to Baransu formed the backbone of the prosecution’s case, and the defense teams challenged their authenticity. In addition to fonts that did not exist in 2003, the CDs contained files referring to dozens of institutions and organizations that also did not exist back then, along with many more pieces of evidence proving that they were forged. “The court refused to take into consideration all the separate, 26 expert reports we submitted, prepared by highly respected [universities and institutes] that specialized in this matter,” Cicek said.

While an Ankara court also decided on the same day to sentence retired army chief Kenan Evren, 96, to life imprisonment for leading a 1980 coup, the AKP government has made its case for ending the military’s role in civilian politics over a coup that did not happen. Turkish Prime Minister Recep Tayyip Erdogan had kept claiming that the military cannot give up its tradition of conducting coups against the people’s will. Defense lawyer Huseyin Ersoz told Al-Monitor, however, that not only was there no proof that a coup had been plotted, there was no legal punishment for intent to commit a crime in Turkey’s legal system.

Justice Minister Bekir Bozdag continues to insist that the freed military officers really did hatch a plot to bring down the government. He said, “The court did not decide whether there was a coup plot or not. What the court decided was that there were some violations in the method of reaching the judgment.”

Mustafa Guler, a lawyer and retired military intelligence officer, also told Al-Monitor that the Constitutional Court had no authority to decide on the substance of the case, which is the Court of Appeals' job.

Cicek also objected to Bozdag’s interpretation. “The violations of the right to a fair trial, on the means of the methods, are directly linked to the substance of the case,” she told Al-Monitor. “The politicians need to be extra careful before offering any conclusions in their public remarks.”

Pinar Dogan, the daughter of Cetin Dogan, the former commander who was presented in the case as the mastermind of the plot, agrees. “The UN Working Group on Arbitrary Detention had reached that decision more than a year ago, and had been disregarded by the Court of Appeals. The violations of due process were blatantly evident from day one,” she told Al-Monitor, stressing that this ruling should lead to “the investigation of the real criminals, those who perpetrated the forgery and staged the prosecution on it.”

While Turkish Prime Minister Recep Tayyip Erdogan hinted months ago that he was open to the retrial of these military officers, he once called himself the “prosecutor” of this case and labeled these trials a vital step in ending the military’s tutelage in civilian politics. After he and his four cabinet ministers came under a judiciary investigation in December 2013 in the country’s biggest-ever corruption and bribery case, though, Erdogan started to accuse the US-based Sunni cleric Fethullah Gulen and his followers of being behind these allegations, forming a “parallel state” with aims of bringing down his government. He reassigned hundreds of judges and prosecutors as well as thousands of police officers suspected of being linked to the Gulenist network without any proof that these people had actually violated the law.

Yalcin Akdogan, Erdogan’s close adviser and an AKP deputy, became the first to argue after the revelation of the graft probe that "Gulenists" in the judiciary conspired against the military, putting hundreds behind bars. Although the government has not yet provided any evidence to the public showing who those Gulenists are or how they committed their alleged crimes, there is a wide belief in Ankara that if the Erdogan and Gulen relationship had stayed intact, these officers would not be free today, despite all the violations of their right to fair trial. After all, these judgments have been perceived as political from the beginning and the government is not seen as innocent of legal misconduct.

Engin Alan, one of the Sledgehammer defendants and a member of the Turkish parliament from the Nationalist Action Party (MHP), said after his release June 17 that the accused won’t forget and forgive what happened these past few years and that they will have answers to everyone's questions once the legal process comes to an end. The wide perception among those behind bars is that the government actually aimed to take revenge for the past and acted in animosity toward them.

Yet, the AYM decision clearly gives Turkey an opportunity to correct a mistake, as it brings new judges to this case under a more critical spotlight to uphold the law and to acknowledge that criminal prosecution is an individual process. It is likely that any thorough investigation could find the government guilty of disregarding the rule of law in its entirety. That the country has suffered military coups in the past is not a legitimate justification to convict these hundreds of military personnel. Turkey needs to hold the universal standards of the rule of law as its priority and truly free the courts from any political pressure.