Turkish Prime Minister Recep Tayyip Erdogan has managed to fuse Turkey’s center-right and Islamist-right into one major bloc accepting his explanation of recent political scandals to be conspiracies against his rule. 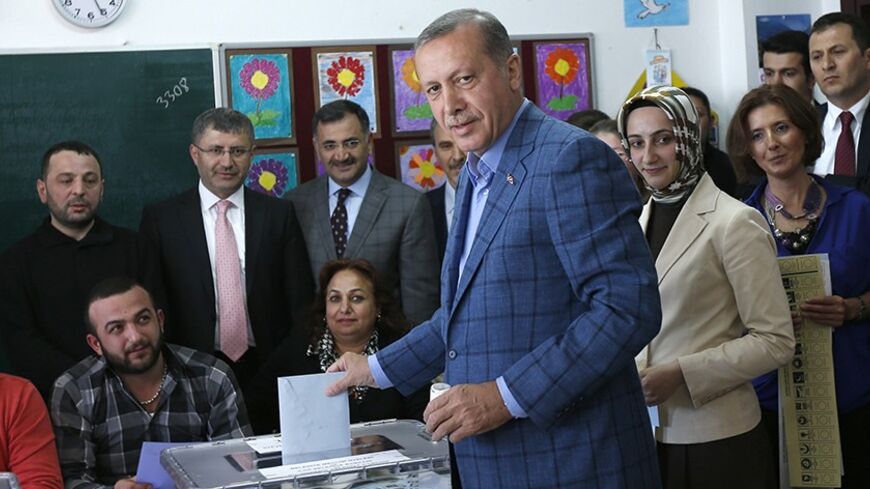 The March 30 elections will go down in history as yet another political victory for Turkey’s powerful Prime Minister Recep Tayyip Erdogan. The national average his party won at the ballots — 43% or 45% of the overall vote, based on the counting method applied — is certainly a big success. Even if all the claims of fraud are true, especially in Ankara, it is clear that Erdogan’s Justice and Development Party (AKP) is still very popular after 11 years in power.

This might come as a surprise to those observers, especially in the West, who thought that Erdogan would lose support because of all the recent political scandals and controversies in Turkey, such as corruption, authoritarianism and the shrinking of certain liberties. Why, they might wonder, does Erdogan still triumph despite all these problems.

To find an answer, one should first look deeper into Turkish society and its political patterns. The first thing to note is that for more than 60 years, throughout which Turkey had regular free and fair elections, Turkish society has roughly been divided into two unequal parts: “The right,” which constitutes some 60%-65% of the votes, and “the left,” which constitutes the remaining 35%-40%. The right, in this context, is defined by respect for tradition — especially Sunni Islam — and a focus on economic development. The left, in return, is defined by secularism and socialist themes of “equality,” along with Alevism, an unorthodox branch of Islam. (That is why today, Alevi music halls on Istanbul’s Istiklal Street feature posters of Imam Ali, Ataturk and Che Guevara in the very same hall of fame.)

The right traditionally has three components: center-right, Islamist-right and nationalist-right. Erdogan’s big success is that he combined the first two under the AKP banner and thus created one of the largest voting blocs in Turkish history. (The nationalist-right is still alive separately, under the banner of the Nationalist Action Party (MHP), which won some 15% of the national average on March 30.) Erdogan’s great achievements regarding economic development — all the highways, skyscrapers, shopping malls and hospitals built under his rule — is the hallmark of the center-right. His Islamic rhetoric and symbolism is the bliss of the Islamist-right.

Therefore, for the center-right or Islamist Turkish voter, who makes up roughly half of society, there is no reason to abandon Erdogan and opt for any of his current rivals. The main opposition Republican People's Party (CHP) is out of the running for two main reasons: The CHP looks very incompetent when compared to the AKP with regard to the economy and government services. Also, the CHP’s ultra-secularist past, defined by the oppression and humiliation of the religious conservatives with policies such as banning the headscarf, still makes the party a bete noire of the right in general.

In fact, the CHP is trying to change both images under the leadership of Kemal Kilicdaroglu, but the progress he has introduced is too little and too shallow. The CHP should change more significantly by moving closer to the center. That the party’s main boost in this election was in Ankara, thanks to its brand-new candidate Mansur Yavas, an export from the center-right, is a telltale example.

But what about all the corruption scandals that could have hurt Erdogan? Well, believe it or not, as shown by a Turkish polling company: “Corruption claims had no effect on local polls.” One reason is that the average Turkish voter recalls that every government recently has been guilty of corruption, so the AKP, at worst, is no exception. (“They steal, but at least they work hard,” is a common line one hears from Turkish taxi drivers.) Second, many religious conservatives also believe that what looks like corruption is in fact some form of informal fundraising for the “good cause” — such as sponsoring Islamic foundations and charities.

Moreover, many pro-Erdogan voters got only more attached to him precisely because of the recent scandals. That most of those allegations were based on wiretaps that were systematically exposed on the Internet only proved that there was indeed a conspiracy against the government by the “parallel state.” Similarly, Erdogan’s bans on Twitter and YouTube, which were condemned by liberals and the West as an attack on freedom, were seen by the pro-Erdogan camp as a justified measure against these “treacherous” campaigns.

This final issue also brings us to the Gulen movement, Turkey’s most powerful Islamic community, which Erdogan condemned as the master of the “parallel state” and the servant of “foreign powers” that want to weaken Turkey. Whatever the reality regarding the “parallel state” is, the Gulen movement — formerly a strong Erdogan ally — certainly went out of its way to oppose Erdogan in these elections, to the level of supporting the CHP, which is a grave sin for most conservatives. In other words, the movement isolated itself from the bulk of the Islamic camp and attracted the wrath of Erdogan. How this will play out in the near future, and how extensive Erdogan’s promised crackdown on “the parallel state” will be, is an interesting question these days.

One key consequence of the election results was to raise Erdogan’s chance to win the presidential elections, which are planned for Aug. 10. In fact, it is not yet clear whether Erdogan will run for these elections, or perhaps support President Abdullah Gul for his second term and remain in power as prime minister. The latest results gave Erdogan a signal that he can win those elections in the first round by winning a simple majority: by keeping his current 45% and adding the votes of Kurdish nationalists, which have emerged lately as his political allies.

The bottom line is that Erdogan keeps winning Turkey’s ballots, and he is not likely to lose anytime soon. Yet, while these persistent victories make the pro-Erdogan camp happy and cheerful, it makes the rest — almost the other half of society — desperate, angry and resentful. That is why Turkey will be prone to more polarization, if not instability, should Erdogan not take steps to win the hearts and minds of his opponents and aim for a national reconciliation.