Erdogan’s victory a warning to West

Despite his party’s win in the municipal elections, the Turkish prime minister’s policies, including toward Syria, are likely to lead to further political polarization and distance from the United States and Europe. 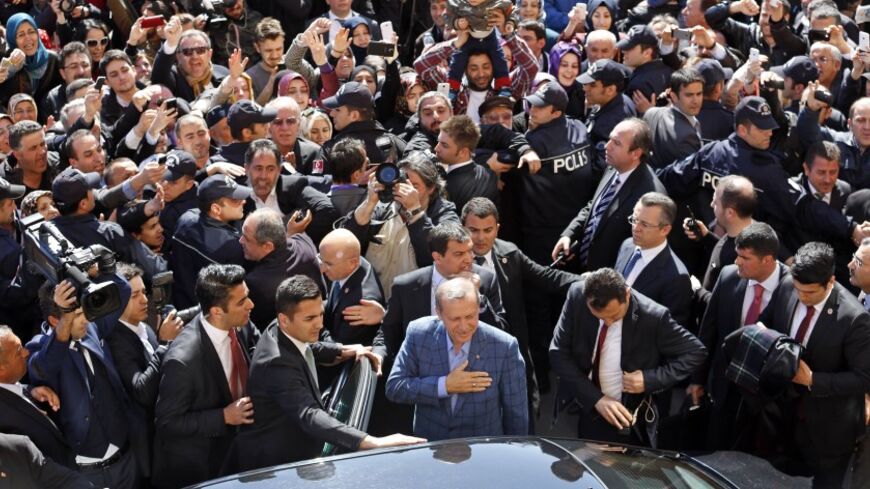 Erdogan’s victory speech offered no olive branches or open hands. It was instead a clenched fist. The prime minister’s remarks conveyed his sense of righteous vindication and included a warning to his political opponents that “we will enter their lair. … They are going to pay the price.”

As Cengiz Candar writes: “Among the difficult-to-forget moments of election night were Erdogan’s emergence onto the balcony, waving his hands and raising the four-finger salute of support for the Egyptian Muslim Brotherhood and his declaring the situation between Turkey and Syria a “state of war” (which, of course, had nothing to do with international law).”

Candar and most analysts expect Erdogan to be even more emboldened to make a presidential run in elections scheduled for August 2014, while launching a public vendetta against the Gulen movement, which Erdogan blames for the corruption allegations and leaks.

Even though Erdogan said his government would comply with the decision of Turkey’s Constitutional Court on April 2 to lift the nearly two-week ban on Twitter, the prime minister added that “I don’t respect” the decision.

Mustafa Akyol explains that Erdogan “keeps winning” because he has fashioned an unprecedented coalition between Turkey’s Islamic right and center-right factions. The secular-right Republican People’s Party (CHP) is still held in low regard because of some of its previous anti-Islamic excesses, although it is trying to change under the leadership of Kemal Kilicdaroglu. One of the CHP’s stars, Mansur Yavas, is contesting the results for mayor of Ankara, as Tulin Daloglu reports.

Akyol considers Erdogan well-positioned for a presidential run, if he goes for it, and concludes: “The bottom line is that Erdogan keeps winning Turkey’s ballots, and he is not likely to lose anytime soon. Yet, while these persistent victories make the pro-Erdogan camp happy and cheerful, it makes the rest — almost the other half of society — desperate, angry and resentful. That is why Turkey will be prone to more polarization, if not instability, should Erdogan not take steps to win the hearts and minds of his opponents and aim for a national reconciliation.”

Barin Kayaoglu writes that the elections are more of the same dismal trend in Turkish politics. The CHP has been unable to score an electoral upset, and the prime minister has compromised people’s faith in political institutions, while poisoning the prospects for compromise between parties. The country, and society, are more polarized than ever.

Erdogan’s approach to Syria could add to the further political turbulence. His victory speech included a proclamation of a “state of war.” But there is a cloud around his declaration. The leaked tape, if true, implies a “wag the dog” scenario where Turkey would consider sparking a provocation with Syria over the Tomb of Suleiman Shah — 24 miles inside Syria, but claimed by Turkey. The Islamic State of Iraq and al-Sham (ISIS) has threatened the tomb, but the official Turkish line is that ISIS is in a “behind the curtains” alliance with the Syrian government, according to Turkish Foreign Minister Ahmet Davutoglu.

The leaked tape followed the Turkish shooting down of a Syrian jet on March 23, which Al-Monitor’s Kadri Gursel writes many considered to have been linked to domestic politics and the election campaign.

Amberin Zaman reports this week from Hatay province that the agitation along the Turkish border has only heightened anxiety and sectarian tensions, with Alawite residents in this mixed community saying that Turkey supports Islamist rebels and may be seeking a provocation with Syria.

It is worth noting that Davutoglu, who attended the NATO Summit in Brussels this week, presented no evidence of a Syrian threat to Turkey, as Tulin Daloglu reports.

As Semih Idiz writes, the fall of the Syrian village of Kassab to Islamist rebel forces led by Jabhat al-Nusra is adding to Turkey’s fractured ties with the West:

“Attacks against the Armenian community in the Syrian town of Kassab by the jihadist Jabhat al-Nusra group, which the Erdogan government is accused of supporting — an issue that has already been taken up in the [US] House of Representatives — could also fuel tensions between Washington and Ankara. Another development that will have angered Erdogan and his supporters was an inquiry ordered by British Prime Minister David Cameron into the activities of the Muslim Brotherhood, which has resulted in speculation that the group could be banned in Britain. Erdogan is a strong supporter of the Brotherhood, of which many consider the AKP to be an honorary member.”

Kassab has now become a cause celebre for the Armenian diaspora, as Pinar Tremblay writes, provoking responses from the US State Department and members of Congress. Tremblay also reminds readers that Erdogan’s Syria policies are generally considered a failure, are unpopular with most Turks and have been the focus of demonstrations in the country, mostly unreported in the Western media.

Although Turkey is experiencing blowback from terrorists for its failed Syria policies, for some reason the Turkish government has not yet been compelled to shut down its borders to the traffic in terrorists and arms that seem to enter Turkey with impunity. Kassab may now spark a more intensive US focus on Turkey’s role, and the seemingly fantastical notion of an Assad-ISIS alliance as an excuse for Turkish military intervention probably won’t cut it, as the humanitarian and terrorist situation worsens by the hour for Syria and its neighbors.

As this column has argued several times, the new pulse of Geneva II is toward a focus on facilitating humanitarian and counterterrorism cooperation, both regionally and internationally. Turkey does itself and the region no service by resisting this trend. Its role should be as a leader in these areas, not by pursuing discredited and failing policies to drag it and its allies further into the war in Syria.

And there are already divisions between Erdogan and Turkish President Abdullah Gul on Syria and other issues, including the bans on social media. As this column said last week:

“The question will be whether President Abdullah Gul, who has already gently yet clearly distanced himself from Erdogan on Syria, social media controls and other issues (as has been reported by Al-Monitor), may consider taking a stand on those actions of the prime minister which are dividing and destabilizing Turkey. If Gul takes such a stand, then attention will be on the reaction of the United States and Europe, which are seemingly running out of patience with the prime minister’s erosion of Turkey’s democratic institutions.”