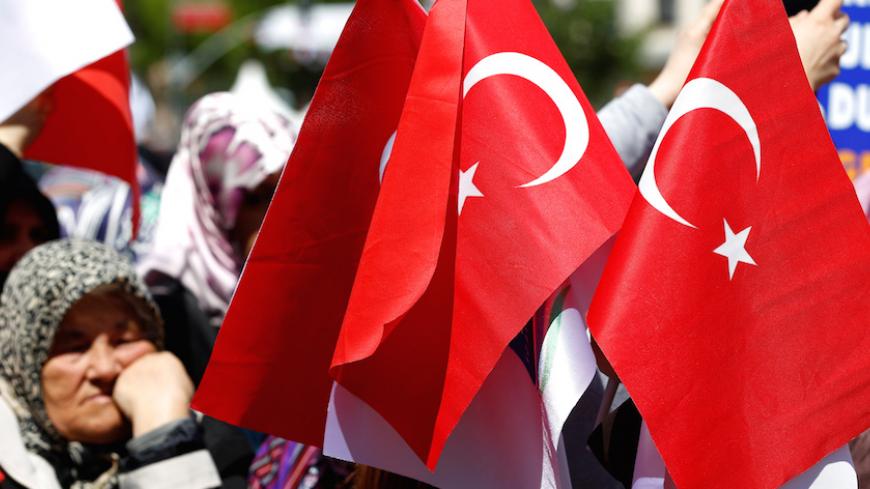 Supporters of Turkish President Recep Tayyip Erdogan wave national flags as they wait for his arrival during an opening ceremony in Istanbul, May 6, 2016. - REUTERS/Murad Sezer

The ruling Justice and Development Party (AKP) last week introduced a bill to deprive parliamentary deputies of immunity from prosecution, which will allow the government to prosecute pro-Kurdish People’s Democratic Party (HDP) lawmakers on charges of collusion with the Kurdistan Workers Party (PKK), which both Turkey and the United States consider a terrorist organization.

Amberin Zaman writes, “Coming on top of the collapse of a two-year cease-fire in August and a sharp escalation in violence between Turkish security forces and the PKK, the ouster of the HDP deputies would deal an additional blow to the country's fraying democracy. It would also increase political instability and deepen the chasm between Turks and Kurds, perhaps even thrusting them into the intra-ethnic conflict [HDP leader Selahattin] Demirtas recently warned against.”

On May 6, two journalists were sentenced to prison for publishing state secrets, and Can Dundar, editor-in-chief of Cumhuriyet, was the target of an assassination attempt outside the courthouse. Joel Simon, executive director of the Committee to Protect Journalists, said, “What was really on trial was the Turkish criminal justice system, which is guilty of gross misconduct.”

Zaman reports that the United States has been restrained if not muted in response to Erdogan’s actions. “In recent months, Washington has been bending over backward to accommodate Turkey. The United States has stepped up air support for Turkish-backed Syrian rebels, including the jihadi Ahrar al-Sham. These rebel groups are fighting to eject IS — thus far unsuccessfully — from areas bordering Turkey, with the aim of preventing the YPG from doing so and laying claim to those territories. Washington has reportedly arranged for meetings between Arab members of the YPG-led Syrian Democratic Forces (SDF) and Turkish officials in order to appease Ankara's fears over an imminent US-backed SDF operation to wrest control of the Syrian town of Manbij, an operational center for IS overseas attacks. In a recent Senate hearing, US Secretary of Defense Ash Carter, who is cited as one of Erdogan's fiercest critics within the Obama administration, confessed that the YPG and the PKK were closely linked, thereby ending nearly two years of formal denial of a well-established fact. Meanwhile, Washington has said little if anything about the gross human rights violations opposition lawmakers insist were committed by Turkish security forces as they flush out PKK militants embedded in neighborhoods in the mainly Kurdish towns and cities in southeast Turkey.”

Metin Gurcan explains that as a result of increased Islamic State terrorist bombings and attacks on Turkish border towns, as well as US pressure, “Turkish decision-makers have noticeably changed their approach against IS. After virtually ignoring the IS threat to Turkey since the summer of 2014, they seem to have belatedly recognized the danger. One impediment to a clearer understanding of the threat is that some Turkish officials have been promoting conspiracy theories about foreign powers being behind IS. Another hurdle is Turkish political parties' inclination to identify the IS threat according to their ideologies, and not through joint political and popular approaches.”

There was also the resignation of Prime Minister Ahmet Davutoglu, who Mustafa Akyol describes as ending up being a “slight nuisance” for Erdogan’s bid for absolute power. Akyol writes, “The only way Davutoglu ‘betrayed’ Erdogan was that he tried to be relatively more moderate and less authoritarian. Unlike Erdogan, for example, Davutoglu seriously considered forming a coalition government with the main opposition party after the elections on June 7, 2015, when the Justice and Development Party (AKP) lost the parliament majority. Unlike Erdogan, he opposed the jailing of journalists and academics who were put on trial. And unlike Erdogan, he tried to build a consensus with environmentalist protesters rather than demonizing them as political provocateurs. That's why, compared to Erdogan, Davutoglu became a relatively less negative figure in the eyes of the opposition circles. For Erdoganists, however, all this translated into ‘treason.’”

Cengiz Candar offers a more critical political obituary for Davutoglu, who will continue to serve as a representative of the AKP in parliament. As Candar puts it, Davutoglu, who began as an “obscure Islamist academic in one of the fringe universities of Istanbul,” and rose in the AKP on the coattails of former President Abdullah Gul, is effectively finished as a politician of consequence.

He continues, “Davutoglu has been acquiescent in the wrongdoings of AKP rule and has had a major role in them. He is leaving the scene with such a weak standing that it would be nearly impossible for him to make a comeback. And even if he did return, it is very unlikely that he would have a significant following. Also, Davutoglu’s is not an attractive name for Abdullah Gul, his former mentor, and for many AKP elders currently out of favor with Erdogan. They see Davutoglu as a person who deserted them and sided with Erdogan. Davutoglu had no grassroots constituency in the AKP and thus his departure will be fairly easy. He is now entering the 'pantheon' of political corpses who were once upon a time big names of AKP power. What is perhaps tragic about him is that despite the growing wrath for the name of Erdogan, there are not many who are mourning Davutoglu's demise.”

Pinar Tremblay writes that Davutoglu is “said to be the main architect of Turkey's failed Syria policy. Davutoglu's forced departure may indeed provide a graceful exit to Erdogan from the Syrian morass. Davutoglu is seen as a political figure but not a policymaker. His critics blame the Syrian mess on Davutoglu's love for grand rhetoric, which they say lacks substance.”

Akyol describes what happens next. The AKP, meeting on May 22, will appoint Erdogan’s chosen candidate as head of the party, replacing Davutoglu, and Erdogan will then appoint the new party chief as prime minister. But that will not be enough, Akyol writes. “Erdogan wants to turn his de facto power into a constitutional reality. That's why he still wants a “presidential system” with an all-powerful presidency. For this he needs to change the entire constitution, but the AKP does not have enough seats for that. So, Erdogan will either try to gain more seats in the current parliament, or call for new elections when he feels the time is right.

The option of getting the votes needed in the current parliament "could develop from the cooperation with the Nationalist Movement Party (MHP), whose leader, Devlet Bahceli, has lately been flirting with the AKP to suppress the political rebels in his own party. Or it could develop from the jailing of a few dozen deputies of the pro-Kurdish Peoples' Democratic Party (HDP), for links with terrorism and running a mini-election for the emptied seats, which the AKP is likely to win.

"The second option, yet another early general election, is what those in Ankara consider possible also. Accordingly, early elections at the right time — perhaps this autumn — could push both the pro-Kurdish HDP and the nationalist MHP below the 10% threshold, giving the AKP more than enough seats to present its new constitution, and the 'presidential system,' overnight."