The Davutoglu era is over

As Davutoglu has no grassroots support, the prime minister's departure will be smooth. 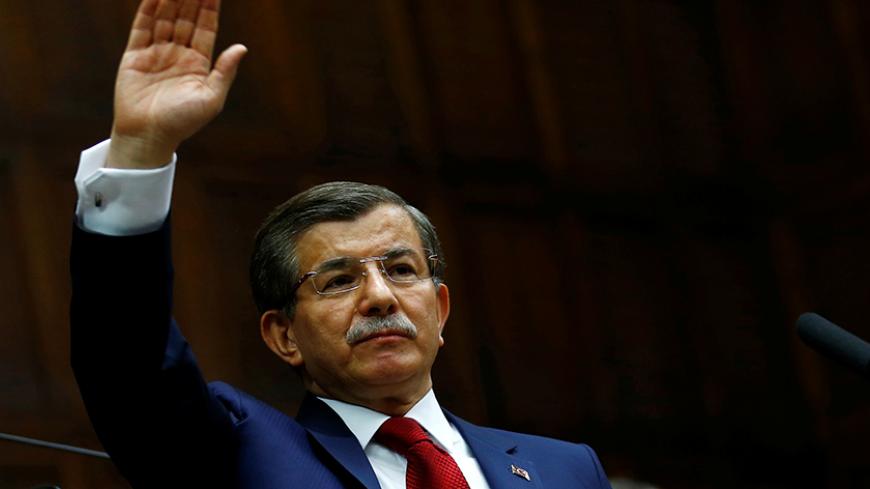 Turkish Prime Minister Ahmet Davutoglu greets members of parliament from his ruling Justice and Development Party as he arrives for a meeting at the parliament in Ankara, May 3, 2016. - REUTERS/Umit Bektas

Should I boast about being prophetic because less than 48 hours ago I informed my editor at Al-Monitor that the title of my next column would be “Is it time to write an obituary for Davutoglu?”

Perhaps I should equally and ironically be considered as shortsighted because only a couple hours after informing my editor, Turkish Prime Minister Ahmet Davutoglu had become a man of the past. His over-ambitious tenure as Turkey’s prime minister is over.

In a rift that evolved rapidly with President Recep Tayyip Erdogan, it was more or less certain that Davutoglu's head would be chopped off by the mighty and larger-than-life head of state, reminiscent of the fates grand viziers had in Ottoman imperial history when they came into conflict with the sultan.

A grotesque tweet by Claire Berlinski, who had been an expatriate and freelance journalist based in Istanbul until recently, put it sarcastically and rather bluntly: “Will Erdogan's deaf mutes now strangle Davutoglu with a silken cord?”

In the contemporary Turkish case, “Erdogan’s deaf mutes” were the overwhelming majority of the ruling AKP’s 50-member Executive Council that had curbed the powers of Davutoglu, who as prime minister was also the chairman of the party. His powers of appointing the heads of city and district branches of the party were taken from him.

All those dramatic moves masterminded by Erdogan suggested that Davutoglu was left with two options: to remain as prime minister in disgrace or to leave office in perceived disgrace.

Yet he was not even allowed to choose between these disgraceful choices. Over the weekend, all of a sudden, a new blog calling itself The Pelican Brief launched a vehement attack on Davutoglu and his cohorts. It listed 27 reasons where, when and how he differed with the “reis” (chief) — that is, Erdogan.

The name of the blog was interesting in itself, as "The Pelican Brief" is a 1993 political thriller based on the novel of the same name by John Grisham, directed by Alan J. Pakula, and starring Julia Roberts and Denzel Washington.

The staunchly pro-Erdogan Pelican Brief indicated clearly to those who have a sense of Turkish political history and the history of the Justice and Development Party (AKP) in addition to general knowledge about the personalities or dramatis personae involved that Davutoglu’s days were numbered. Either that, or that he was already in the hands of “sultan’s deaf mutes” on the way to his “strangulation.”

This succession of events inspired me to write an op-ed piece for Al-Monitor about whether it was time to write a political obituary for Davutoglu. But I have to admit that I was thinking it would be a few weeks before his inevitable end, not a few hours.

But in the course of 24 hours, Erdogan met with Davutoglu for one hour and 40 minutes. Davutoglu convened the AKP Executive Committee, which took less than 40 minutes to announce that on May 22, an extraordinary party congress would meet to elect a new chairman and that Davutoglu would not be a candidate.

So, the era of Davutoglu in Turkish, international, Middle Eastern and Islamic world politics has come to an end. He has been an overly ambitious figure. He left his mark both in Turkey’s ascent and descent in the international political arena. He is considered the architect of Turkey’s re-entry into the Middle East; this led many in the world to describe him, mostly inadvertently, as “the neo-Ottomanist.”

He coined the famous motto “zero problems with neighbors.” Yet Turkey’s seemingly successful re-emergence in the Middle Eastern political scene then became the loneliest period for Turkey in its republican history in terms of foreign policy. There is nearly no neighbor or a major international player that Turkey does not have acute problems with. He is destined to be remembered as the architect of Turkey’s unprecedented failures in foreign policy.

Yet these were not at the roots of his differences with Erdogan. The real difference that led to Davutoglu’s downfall is his uncontrollable ego and ambition that did not allow him to offer loyalty to an even bigger ego, Erdogan himself, in a way the latter demanded from his faithful.

Western observers were not accurate in assessing the inner dynamics of the AKP’s power configuration. An Ankara correspondent of a very credible Western media outlet, for example, emphasized Erdogan’s miscalculation in appointing Davutoglu as his replacement in August 2014.

“As president, he chose a prime minister who he thought would be pliant: the ex-foreign minister and bookish former academic, Ahmet Davutoglu. But it seems he miscalculated. Seeing wavering public support for a presidential system, realizing that he would be significantly sidelined should it materialize, and disagreeing with Mr. Erdogan on a growing list of policies, the prime minister has quietly dissented,” he wrote.

Davutoglu had been introduced to state bureaucracy and politics thanks to Abdullah Gul, who served as president from 2007-2014. In November 2002, when Gul formed the first AKP government as the prime minister, one of his first acts was to appoint Davutoglu as his special adviser, granting him the title of ambassador; until that point Davutoglu had been an obscure Islamist academic in one of the fringe universities of Istanbul.

Davutoglu gradually rose to fame, becoming influential in shaping the AKP's new foreign policy and the ideology behind it; foreign policy had been a weak point for the quasi-Islamist party.

Thanks to his increasing role and reputation, Davutoglu’s primary book, “Strategic Depth,” became internationally known and translated into several languages.

One of his students, Behlul Ozkan, took the painful mission of tearing down the myth of his “Strategic Depth.” Having read every article and every published line that Davutoglu has written during his lifetime, Ozkan, who developed a reputation as exclusively being a Davutoglu expert, wrote a very important piece published by Survival, the periodical of the British think tank International Institute of Security Studies under the title “Turkey, Davutoglu and the Idea of Pan-Islamism.” Ozkan's New York Times piece “Davutoglu and Turkey’s Imperial Fantasy” followed.

The following lines of Ozkan are noteworthy:

“Mr. Davutoglu’s classroom pronouncements often sounded more like fairy tales than political analysis. … Mr. Davutoglu was confident that his vision could transform what was then an inflation-battered nation, nearly torn apart by a war with Kurdish separatists, into a global power.

"He crystallized these ideas in 'Strategic Depth' in 2001, a year before the Justice and Development Party, or AKP, came to power. In the book, he defined Turkey as a nation that does not study history, but writes it — a nation that is not at the periphery of the West, but at the center of Islamic civilization.

"Mr. Davutoglu saw himself as a grand theorist at the helm of his country as it navigated what he called the 'river of history.' …

"But Mr. Davutoglu is not a 'neo-Ottomanist — a label often applied to him. He is a pan-Islamist. … Mr. Davutoglu believes that Turkey should look to the past and embrace Islamic values and institutions. …

"According to Mr. Davutoglu, the nation states established after the breakup of the Ottoman Empire are artificial creations and Turkey must now carve out its own Lebensraum — a phrase he uses unapologetically. Doing so would bring about the cultural and economic integration of the Islamic world, which Turkey would eventually lead.”

Since Davutoglu will no longer be around, it is highly doubtful that he will go into the annals of history as a “great Islamist ideologue.” Most probably, his political demise will mean that Turkey’s imperial fantasy will be over.

Is there any way for Davutoglu to make a comeback? Could his downfall portend a big crack in the AKP's power and trigger a very new process challenging Erdogan’s increasingly authoritarian rule?

No. Davutoglu has been acquiescent in the wrongdoings of AKP rule and has had a major role in them. He is leaving the scene with such a weak standing that it would be nearly impossible for him to make a comeback. And even if he did return, it is very unlikely that he would have a significant following.

Also, Davutoglu’s is not an attractive name for Abdullah Gul, his former mentor, and for many AKP elders currently out of favor with Erdogan. They see Davutoglu as a person who deserted them and sided with Erdogan.

Davutoglu had no grassroots constituency in the AKP and thus his departure will be fairly easy. He is now entering the “pantheon” of political corpses who were once upon a time big names of AKP power.

What is perhaps tragic about him is that despite the growing wrath for the name of Erdogan, there are not many who are mourning Davutoglu's demise.