What do Davutoglu's Cabinet choices indicate?

Turkey's new Prime Minister Ahmet Davutoglu is clearly working under President Recep Tayyip Erdogan's direction, but some of his Cabinet choices may be attempts to placate critics. 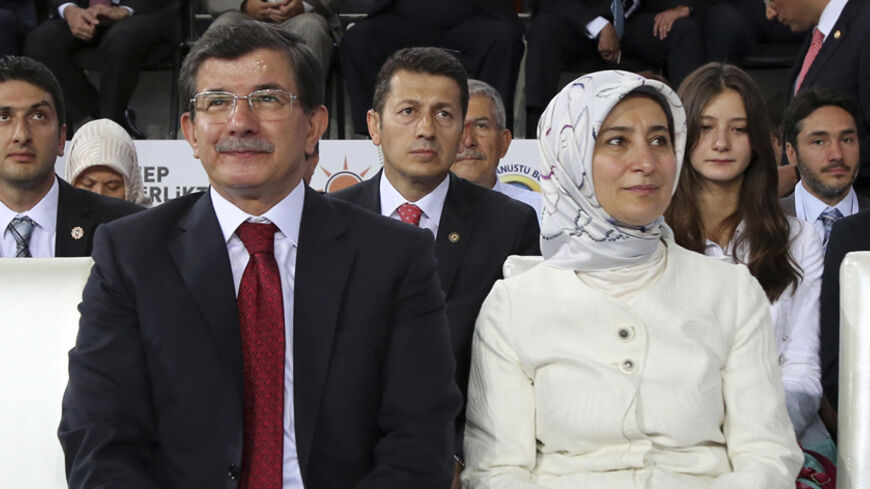 Within a day of Recep Tayyip Erdogan moving into the Cankaya presidential palace overlooking Ankara as the 12th president of Turkey, new Prime Minister Ahmet Davutoglu submitted the list of the 62nd Council of Ministers.

At first glance, this seems impressive efficiency, but it is more a reflection of a swift transition of power under President Erdogan, who aspires to be Turkey's “supreme leader.”

The new Cabinet formed by Davutoglu, until last week the minister of foreign affairs, is more or less a replica of the previous Erdogan government. Three ministers of Erdogan’s Cabinet have been replaced by four new ones, of whom two are the new deputy prime ministers. One was Erdogan's senior adviser and the other is a deputy chairman of the Justice and Development Party (AKP).

In other words, Erdogan deployed two “political commissars” to both flanks of the new government who will enhance — undeniably — Davutoglu's power over the government. Davutoglu, in his speech to the AKP congress that confirmed his appointment by unanimous vote as per Erdogan’s wishes, made it clear that he will be subservient to the president, despite the strong personality he showed in his role as foreign minister.

One striking feature of this government must, however, be noted: Two names critically vital for the international markets, Deputy Prime Minister Ali Babacan and Minister of Finance Mehmet Simsek, have retained their seats.

International markets tended to see Babacan as a "safety valve." Keeping the management of the economy intact in the new government saves Turkey from a potential economic crisis that could have erupted because of mistakes made at the top. The new government is indicating that it does not want to rock the boat economically, at least not until the 2015 elections.

Another interesting feature is the appointment of Mevlut Cavusoglu as the new foreign minister; his replacement as minister of European Union Affairs is Volkan Bozkir, a purely secular AKP deputy (a rarity) and former Turkish ambassador to the EU, who once served as EU secretary-general.

In his speech at the AKP congress, Davutoglu said the EU is a priority for Turkey. The appointment of Cavusoglu, who was the chairman of the Parliamentary Assembly of the Council of Europe, as the foreign minister and the inclusion of Bozki, whose entire diplomatic career has more or less focused on EU affairs, can well be interpreted as the continuation of Turkey’s commitment to the West by the Erdogan-Davutoglu team.

However, this can also be deceptive. The latest debate in Turkish intellectual circles on who Davutoglu is and Davutoglu’s own remarks are not signaling a pro-Western vision. The contrary is much more well-founded.

The debate was sparked by an article of a young academic, who happened to be a former student of Davutoglu, on ideological tendencies of Turkey’s new prime minister. An assistant professor at Istanbul’s Marmara University, Behlul Ozkan — who examined more than 300 pieces Davutoglu wrote for various media outlets and academic journals before 2000 — had an impressive analysis titled “Turkey, Davutoglu and the Idea of Pan-Islamism” in the most recent issue of Survival, the periodical of the prestigious British think tank IISS.

Ozkan argued convincingly, based on his empirical and theoretical study, that Davutoglu, despite frequent references, is not a “neo-Ottomanist” but a “Pan-Islamist.”

When Davutoglu's name came to the fore as the new prime minister of Turkey, by Erdogan’s appointment, a debate on Davutoglu’s true ideological identity and real political aspirations was triggered.

Sahin Alpay, a columnist at the daily Zaman and a renowned political scientist, disputed Ozkan’s observation. He qualified Davutoglu more as an “Islamic Kemalist” or a “religious nationalist,” both controversial labels. He wrote: “Ozkan’s research is worth noting. It could hold light to Davutoglu’s ideas during his academic career. But looking at it from the angle of Davutoglu’s ideas that guided his political career first as Erdogan’s senior adviser after 2002 and as the foreign minister after 2009, it is not at all convincing.

“The foreign policy of Erdogan and Davutoglu doesn’t fit neo-Ottoman, Pan-Islamist, Sunni sectarian and other formats. It is not easy to affix an ideological label to a foreign policy that initiated accession talks with the EU, gave the Kurecik radar base to NATO, was awarded by the Israeli lobby, formed a personal relationship with [Syrian President] Bashar al-Assad, recommended secularism to Egypt and felt at home in Tehran. One can therefore say that the policies pursued by the AKP internally and externally were not really based on principles and ideologies but were pragmatic, populist, opportunist and geared to achieving and preserving power. But if we really have to devise an ideological label, then we can call it Islamic Kemalism or religious nationalism.”

Professor Omer Taspinar, a well-known Turkish-American academic and a senior fellow at the Brookings Institution, a reputable think tank in Washington, also took part in the debate on Davutoglu’s ideology. He wrote the following:

“Perhaps most important is the question of Davutoglu’s ideology. There are numerous articles written about this question, and the emerging consensus is that he is an incurable idealist. It may be reductionism to argue that he is an Islamist, but it is undeniably true that he has focused on parts of the world where Muslims are facing injustice with much enthusiasm. Although he rejects being labeled neo-Ottoman, it is also undeniably true that he speaks of Ottoman tradition, tolerance and governance with great nostalgia. As most of his students, he is very critical of the West and its Orientalism. His years in Malaysia as a professor bring a colorful interpretation to his critic of colonialism and imperialism. Yet, what he often fails to realize is that in his criticisms of the West, he often repeats the methodological fallacy of Orientalism. The result is what can be best labeled 'Occidentalism' — a tendency to generalize and construct a Western civilization with a prejudice similar to the one displayed by Orientalists."

When I asked Taspinar how he arrived at the conclusion that it is reductionism to define Davutoglu as a Pan-Islamist, and what he offers as an alternative, he responded that Davutoglu is closest to be defined as “a Ottomanist-Turkish nationalist” or “a religious nationalist,” a view closer to that of Alpay.

Davutoglu, speaking at the AKP congress as Turkey’s new prime minister, said that prior to the AKP’s rule in 2002, “Turkey, 600 years after the conquest of Istanbul, was again in an interregnum and the AKP ended that interregnum period.” Moreover, he said that AKP power was not solely meant to restore the authority of the Turkish state but that it aspires to a new civilization.

As people close to Davutoglu can attest, when he uses the word “civilization,” he does not mean “Western civilization” but rather "Islamic civilization.” Therefore, Davutoglu's “new civilization” should be interpreted as “resurrecting the gilded age of Islam under Turkey’s leadership.”

Surely this is an ambitious and noble aspiration. But whether it is realistic is a matter of debate; just like by simply looking at the pro-EU statement of the composition of the new government, one cannot be sure of Erdogan and Davutoglu’s Western leanings.