Why Turkey is finally getting serious about the Islamic State

The Islamic State seems determined to open a front in Turkey, militarizing its operations there and forcing Ankara to respond in kind. 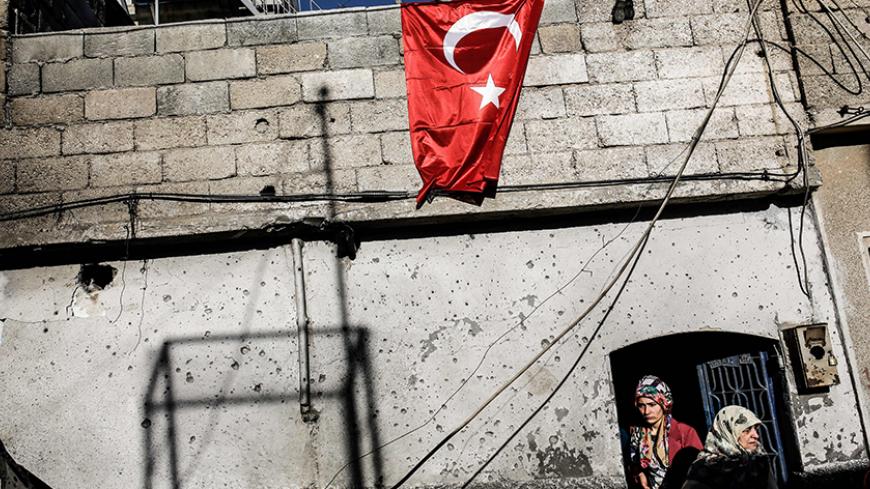 A man hangs a Turkish flag as two women stand in the doorway of their damaged house after rockets from the Islamic State hit the border town of Kilis, April 25, 2016. - YASIN AKGUL/AFP/Getty Images

Turkey recently stepped up its game against the Islamic State (IS) in response to increasingly militarized attacks on targets inside Turkey's borders.

IS is striving to open a front against Turkey to expand its area of operations and ease the heavy pressure it is under in Iraq and Syria. No doubt IS is keen to show that its success story continues by shifting the war to Europe and Turkey. IS is also holding Turkey directly responsible for losses in northern Syria.

For about a year, Turkey has been arresting a growing number of IS militants and sympathizers, but Ankara, aware of local sensitivities, has been careful to keep its anti-IS struggle inside Turkey low-key without attracting media attention and upsetting public opinion.

This approach was maintained until about 10 days ago when Turkey was forced to escalate to a high-profile military struggle after IS directly targeted security forces and fired anti-tank missiles.

What changed in the past 10 days? For one thing, as IS continues its Katyusha rocket attacks on the Turkish border city of Kilis, it's improving its accuracy. There are also reports that IS might have transferred some of these rockets to inside Turkey.

As I wrote April 26, Turkey is trying to devise a strategy with US assistance against these rocket attacks, which have killed 21 people so far. Similar situations in other parts of the world show that such attacks can be mitigated, but not fully eliminated, with effective defense measures.

One of the first attacks of its type was an IS missile assault against a Turkish howitzer battery at Karkamis, directly opposite IS-controlled Jarablus in Syria.

Photos posted at the A’amag website of IS on April 28 show IS militants firing a Russian-made, wire-guided Metis anti-tank missile from 1,400 meters (nearly nine-tenths of a mile) and hitting Turkey’s T-155 howitzers. This was the first anti-tank attack by IS from Syria into Turkish territory. Turkish security sources say the attack was not covered widely by the Turkish media.

Military sources said one T-155 was hit and lightly damaged, and there were no casualties. Security sources reported two howitzers were hit.

Authorities said Ismail Gunes carried out the attack, which killed two policemen and wounded 20 people. They said he had crossed to Syria in 2014 and later joined the group led by Yunus Durmaz, who had planned the Suruc suicide bombing against civilian volunteers going to Kobani, and the double-bomb attack against a peace rally near the Ankara train station that killed more than 100 people.

A debate has been raging about how Gunes — who was supposed to have been monitored by Turkish intelligence services — was able to carry out the May 1 attack.

Meanwhile, local media in the southeast reported that IS gave mosque sermons April 29 at Bab, Manbij and Jarablus that called for attacks against security forces and public buildings in the border region, primarily at Gaziantep, Karkamis and Kilis. IS-penned sermons said such attacks should inflict massive damages and force the locals to evacuate.

The police report warned that some of the thousands of Turkish militants of IS are now trying to find ways to return to Turkey.

Turkish decision-makers have noticeably changed their approach against IS. After virtually ignoring the IS threat to Turkey since the summer of 2014, they seem to have belatedly recognized the danger. One impediment to a clearer understanding of the threat is that some Turkish officials have been promoting conspiracy theories about foreign powers being behind IS. Another hurdle is Turkish political parties' inclination to identify the IS threat according to their ideologies, and not through joint political and popular approaches.