The Kurdistan Workers Party's weapons, ammunition and equipment captured by Turkey show a previously unknown diversification and growing sophistication of the group's arsenal. 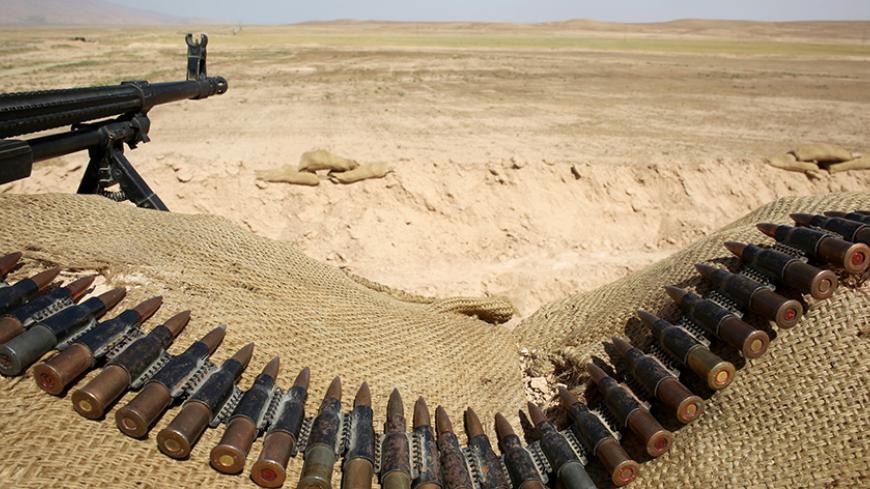 Bullets lie next to a gun at a Sinjar Resistance Units checkpoint, a militia affiliated with the Kurdistan Workers Party, in the village of Umm al-Dhiban, northern Iraq, April 30, 2016. - REUTERS/Goran Tomasevic

If you had asked me five years ago to reveal the Kurdistan Workers Party's (PKK’s) combat inventory, I would have listed the AK-47 Kalashnikov as the personal gun used across the board, the BKC (Bixi) machine gun, the SVD Dragunov sniper rifle, a few A2/A4 US rifles, anti-tank weapons limited to RPG-7 rocket launchers, no anti-tank missiles, extremely limited access to MANPADS and shoulder-fired, ground-to-air defense missiles. The same PKK force would rely on commercially available Yaesu radios to communicate, would not be equipped with night and thermal vision optics, and would procure its uniforms and supplies locally. In short, it would be equipped for long-term, low-intensity clashes in rural terrain.

But now, because of the wars in Iraq and Syria with advanced weaponry used by all belligerents, the PKK has become a sophisticated force by diversifying its weaponry, ammunition and equipment. The Turkish military notes the PKK and its northern Syrian combat affiliate, the People's Protection Units (YPG), are gradually becoming more of a regular army by constantly improving their conventional capabilities such as armored unit tactics; artillery and rocket-fire support without line-of-sight availability; large-scale logistics movements; coordinating close air support; and providing artillery-forward observation, surveillance and reconnaissance with unmanned aerial vehicles (UAVs) and urban warfare.

Today, the Turkish Armed Forces (TSK) is learning on the ground in al-Bab clashes how tough the new generation of urban warfare with the Islamic State (IS) can be. Turkish troops are experiencing major tests against the defensive model IS has developed based on tunnel warfare, anti-tank missiles and vehicle-borne improvised explosive devices, used with lethal effect in urban warfare. Ankara is now seriously considering whether the PKK will also be achieving the military technology and modern military capability levels of IS.

We had earlier seen how the PKK had developed its weaponry, ammunition and equipment inventories within its trench-barrier warfare against Turkish security forces in Cizre, Silopi, Silvan, Sur/Diyarbakir, Yuksekova and finally at Nusaybin. The weapons and equipment Turkish forces have seized in the clashes painfully show that the PKK diversification and sophistication efforts are continuing unabated.

According to a defense analyst who spoke to Al-Monitor in Ankara but did not want his name mentioned, diversification of the PKK arsenal is most perceptible in its anti-tank rocketry, hand grenades and anti-tank guided missiles (ATGMs). The source said, “In the past, the PKK used to rely mostly on PG-7 RPG-7 rockets. Now they field RPG-7VM, PG-7ML, DZGI-40 and HEI-AP rockets. There is a sizable increase in their stocks of hand grenades of German manufacture DM41 and DM51, South Korean-made K-413, and US-made M26/61 and M67.’’

We also watched on Guerrilla TV — which is accepted as the PKK’s military broadcast system — and in their social media platforms their use of Metis and Fagot anti-tank missiles against Turkish army targets. In a video recording of April 10, 2016, in Uludere in Sirnak province, and June 26, 2016, at Sirnak again, we saw them firing MILAN ATGMs.

From photographs distributed by the TSK, we see that one 9M113 Konkurs launch tube was captured at Cudi Mountain on Sept. 2, 2016, and another one in Semdinli in Hakkari province on Sept. 27. Also at Cudi Mountain, four M7 Osa rockets were found along with a fiberglass Osa rocket tube in Silopi in Sirnak province.

Ankara was particularly concerned by the capture of 9438 Igla (NATO code name Grouse) MANPADS on Aug. 25 in Sason in Batman province. We have to remember that on May 13, 2016, a TSK AH-1W helicopter was shot down with the same type of MANPADS.

In 2016, the Turkish military noted an upsurge in Iranian-made weapons seized from the PKK. For example, on Dec. 3, 2016, Iranian-made M57, RPG-7 rocket-propelled launchers, PG7-A, PG-7-AT rocket launchers and NR431A 60 mm mortar rounds were seized. On Oct. 6, M62P8 120 mm mortar rounds manufactured by the Serbian company Krusij were found in Cukurca in Hakkari province. The ease with which they could harass the Turkish army's fixed and mobile outposts with mortars have encouraged the PKK to procure fire control equipment for its mortar attacks.

A major indication of the PKK’s efforts to diversify its anti-tank weaponry was the capture on June 1, 2013, of a Swedish Saab-Bofors-manufactured AT4 84 anti-tank weapon.

Turkey has also noted the increasing numbers of M16A2 and M16A4 US-made rifles, FN FAL 50 rifles, Serbian-origin M08-40 40 mm rifle grenades and Glock pistols for the leadership. Also noted are the PKK’s efforts to improve its accurate firing at night and in poor visibility by mounting Specter thermal cameras on M16A2 rifles.

The anti-material sniper rifle — the 12.7 mm Kord (or its modified Zagros model) — which was first seen in PKK hands in 2012, has now become a standard weapon. It is extremely effective in harassing helicopters and armored vehicles.

The PKK is working on enhancing reconnaissance with UAVs (drones), and Turkish forces have so far seized US-made RQ 20 Puma and civilian model DJI Phantom drones from the PKK.

The question then becomes how the PKK is procuring so many different kinds of developed weapons systems and equipment. Here a hard reality everyone knows but doesn’t talk about is the weapons black markets that have blossomed in Syria and Iraq, where one can buy or lease any weapons system including tanks and multibarreled rocket launchers. Particularly widespread in Syria is the sale in bazaars of guns and ammunition sent to opposition armed groups or exchanges with other groups. US, European and Iranian weapons and ammunition supplied to armed groups such as Kurdish peshmerga forces, the Iraqi army and Shiite militias are sometimes transferred to the PKK or sold on the market. One must also not ignore the PKK/YPG war booty of weapons and equipment — especially from their clashes with IS.

Another anonymous source speaking to Al-Monitor said, “Contrary to prevailing impression, most of the weapons the PKK uses in Turkey do not enter Turkey from northern Syria but from northern Iraq. This means these are weapons supplied or sold to peshmerga, Shiite militias and the Iraqi army. There is now a lucrative regional weapons black market further nurtured by the clashes in Libya and Ukraine. For instance, I know that some Arab countries import weapons from the Balkans and send them to Iraq.”

Can Ankara put an end to this phenomenon? Unfortunately, that is practically impossible, as serial numbers and manufacturing information are erased from ATGMs and MANPADS. Moreover, Ankara’s continuing problems with Damascus and Baghdad and persisting weakness of a central authority in those countries enable weapons black markets to flourish and operate with impunity.

What is impossible to ignore is that the crises in Syria and Iraq enrich nonstate actors like the PKK and strengthen their military arsenals while severely boosting the security threats to states like Turkey.