The PKK’s alleged shooting down of a Turkish assault helicopter marks a major development in the ongoing fighting between the two sides. 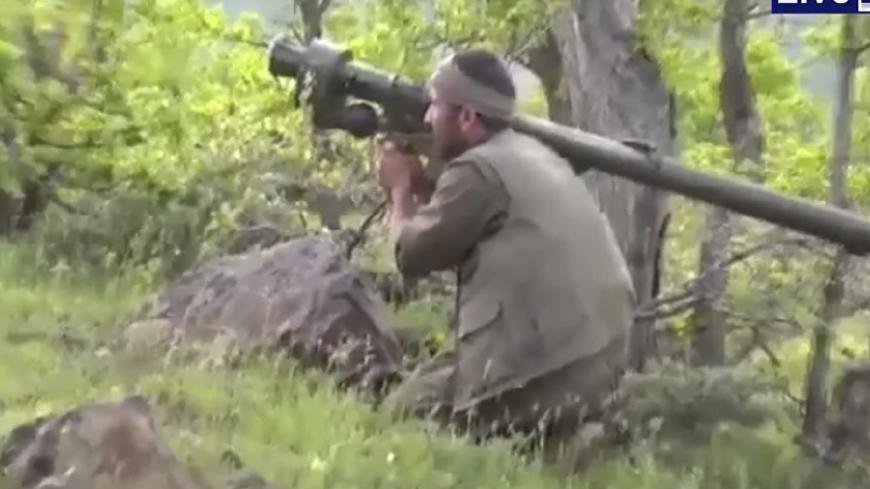 This image taken from YouTube reportedly shows a Kurdistan Workers Party rebel shooting down a Turkish military helicopter on May 13, 2016. - YOUTUBE/Live Leak

In an Aug. 13 article on the spiraling violence in Turkey, I argued that the shooting down of a Turkish warplane or helicopter by the Kurdistan Workers Party (PKK) with a portable, shoulder-held, surface-to-air missile (MANPADS) would be a critical threshold for escalation. In a Dec. 14 article, I noted that the MANPADS threat had increased and that the PKK could use these systems against aerial targets inside Turkey.

Now it appears that this much-feared eventuality has come to pass.

A press note published on the official website of the Turkish General Staff on May 13 read, "A Cobra helicopter dispatched to intervene against terrorists suffered an accident at 0550 hours. In this fatal accident that is believed to have been caused by a technical problem, two of our comrades-in-arms were martyred."

But a day later, a video posted on pro-PKK social media accounts came as a shock. The two-minute video shows the shooting down of a AH-1W Super Cobra with a MANPADS missile.

As this article was being written on the evening of May 15, the story became a major item on social media and widely reported on news sites, though Turkey's mainstream media outlets did not cover it and official bodies did not issue any denials. The lack of an official denial and the national media's noncoverage of the video have only helped to reinforce the video's veracity.

Assault helicopters provide critical close air support to ground forces. These helicopters are the most effective supporters of ground units in their infiltration of and departure from operational zones. By interdicting the escape routes of PKK militants and using 20 mm guns and unguided 70 mm rockets for pinpoint strikes, Super Cobras are the most effective weapons systems in the mountainous southeast region.

Since Turkey’s anti-terror operations began in 1984 until last week's crash, the PKK had shot down only two AH-1W Super Cobra helicopters. The first was hit by an SA-7 Strella near Cukurca on May 18, 1997. The second was downed by an RPG-7 rocket-propelled grenade that hit the helicopter's tail on Feb. 24, 2008, during an operation in northern Iraq.

If the video posted May 14 is true, the May 13 incident will be the third such downing of a helicopter.

As for the technical analysis of the video, it is worth noting that the recording time on the clip matches with the time in the Turkish military's press release. In the video, recorded at 0550 hours on May 13 in rural Cukurca by the Turkey-Iraq border, a calm and professional-looking PKK militant takes aim at the Super Cobra AH-1W with a Russian-made SA-18 Grouse MANPADS. The Super Cobra AH-1W is 3 kilometers (roughly 2 miles) away, slowly flying in circles and providing close air support.

After taking aim, the shooter waits calmly for 15 seconds and fires the missile — probably from the Iraqi side of the border. The missile rises straight up for about 2 kilometers, turns toward the helicopter and after three or four seconds, hits its tail structure. The helicopter continues to fly for a brief moment, then disintegrates and crashes. The shooter and his observer are seen to be at ease in an area with dense foliage. It was clear that the two PKK militants were in the area solely to shoot down the helicopter.

It is not known why the helicopter's radar warning sets and AN/ALE-39 countermeasure systems did not work. Possibly, both pilots were busy with their close air support mission and were not expecting such an attack. Moreover, the helicopter was too close to the missile launcher.

If this video is accepted as factual, we are faced with four key questions.

The first is, where did the PKK find the SA-18? It is possible to reply "most likely in Syria" because it is known that the SA-18s, which constituted the main MANPADS in the Syrian army's inventory, were looted and sold on the black market in 2012-2014. On April 5, there were media reports that Syrian opposition forces had shot down a Syrian air force SU-22 Fitter warplane with the 9K310 Igla-1 missile, which belongs to the same family as the SA-18.

The second key question is, why now? It is worth emphasizing that the PKK has had this capability for some time in rural areas close to the Iraqi border. We must take into account an important factor before answering the question "why now?" The PKK has been trying to divert fighting from towns such as Sirnak and Nusaybin into rural areas. It is possible that the PKK, through such sensational attacks, is aiming to lure Turkish army units away from towns to rural terrain and thus ease the pressure on PKK forces in towns.

The last question is how this incident will affect the course of the clashes.

In Turkey's anti-terror operations, helicopters play a critical role in close air support and logistics, thanks to their aerial evacuation/supply capabilities. Turkish security forces face an increasingly effective improvised explosive device (IED) threat and therefore rely on helicopters for critical missions. This attack will sharply limit the use of helicopters in anti-terror operations. Accordingly, ground units would have to assume a heavier burden. And that will mean both increased convoy and supply activity on the ground — which raises the IED risk in critical areas — and additional risks and greater fatigue for ground units in the field.

It is possible to say that the PKK will use MANPADS only in rural areas and will not deploy them in urban centers. Now the real question is whether a similar attack will take place. That question has become vital for helicopters that carry out close air support as well as aerial evacuation and supply missions.

This attack also lays bare another truth: a mutually catastrophic military stalemate. Unfortunately, the biggest loser of this stalemate will be the energy and potential Turkey needs to direct toward its future.