Meetings between Turkish, Russian military reveal that Moscow had been warned

Turkey and Russia both seem determined to obtain the dominant position in shaping Syria's future. 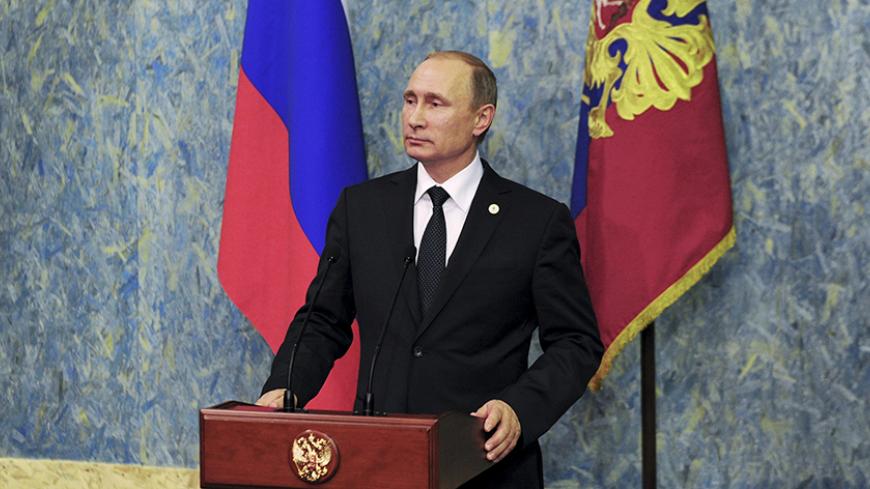 Much has been made of Turkey's recent downing of a Russian plane, but not a lot is being said about that event's possible implications for the power equation in Syria.

On Nov. 24, a Russian Su-24 engaged in an operation against opposition forces — which have been controlling the Bayirbucak area north of Latakia, Syria, for 3½ years — was shot down by an AIM-9X Sidewinder missile fired by a Turkish F-16.

A proper analysis requires an overview of the three-tiered power structure in Syria. The first two tiers are directly linked to the fight against the Islamic State (IS), and the third is the underlying factor that led to the downing of the Russian Su-24 by the Turkish F-16.

To analyze the incident, we must first look at the facts:

According to military sources Al-Monitor contacted in Ankara, Turkish and Russian military officials held five meetings in October in Ankara about violations of Turkish airspace by Russian planes. When Russia did not heed four warnings by Turkey, in the fifth meeting senior Russian officers were informed that the Turkish air force would “strictly apply its rules of engagement.” In an official statement about those meetings, Turkish officers said, “In addition to other military issues, in our face-to-face meetings we emphasized violations of Russian Federation planes of our airspace and informed them of our determination to fully apply rules of engagement.” After that fourth warning, military sources said, Russian planes did not violate Turkish airspace again — until Nov. 24, when Turkey shot down the Russian plane.

It is beyond debate that Turkey's response was disproportionate. Why did an F-16, designed for air combat and armed with standoff missiles, choose to warn and then hit an Su-24 designed to hit ground targets, instead of intercepting as they usually do? Did the Russians intentionally provoke an incident, or did Turkey overreact? Turkey, as it did with earlier violations, warned the Russian planes. Russia, with its customary nonchalance, did not heed the warnings. The missile was fired when the Russian plane was in Turkish airspace and the hit was just on the borderline or, possibly but less likely, inside Syria. The plane crashed inside Syria.

Russia has constantly ignored Turkey’s efforts to establish itself as a legitimate actor in the third tier above the 5-kilometer airspace. Turkey took the latest violation as an opportunity to send the message, “You say you are in Syria to combat IS. But we can no longer allow you to dominate this tier with operations that have nothing to do with fighting IS, thus creating a de facto no-fly zone.” An official who didn’t want to be identified summarized the situation and told Al-Monitor, “The Russians were truly reckless and were constantly producing de facto realities in the field. This is why there was an attempt to demonstrate a red line to them no matter what the cost. Now it is time for crisis management.”

So, what is going on in Syrian airspace? Air security expert Arda Mevlutoglu told Al-Monitor that since the beginning of September, Russia has deployed a sizable air force in Syria. Among the planes Russia has sent are 12 Su-24s, 12 Su-25s and six Su-34s used for attacks, and four Su-30s tasked with interception. Russia also sent an 11-20 for electronic intelligence. Immediately after their arrival at Bassel al-Assad air base, these planes began flying combat missions and performing tactical attacks and close air support tasks, particularly around Homs and in the area between Aleppo and Hama, in coordination with the Syrian army. Recently, Russian bombing attacks have intensified in northern Syria in areas where many Turkmens live.

“At the beginning of [October] Russian planes violated Turkish airspace on several occasions," Mevlutoglu said. "They locked their radars on Turkish lanes for the unusually long period of five minutes. Although Russians said their violations were not intentional, such incidents have escalated tensions.”

According to Mevlutoglu, shooting down the Su-24 is bound to affect the structure of Russia's military presence and the psychology of its field personnel and decision-makers. Russia’s immediate dispatch of the Slava-class naval cruiser Moskva, equipped with naval versions of S-300 long-range air defense missiles to Tartus port, and its announcement that it will be deploying next-generation S-400 air defense systems to reinforce its units and planes in Syria, actually mean it is closing third-tier airspace to Turkey.

Mevlutoglu also noted Russia could increase the number of escorts protecting its planes on attack missions. "At the moment, they have only four S-30s for this task. They may substantially increase the sorties flown by these planes. It should not be a surprise if Russia sends additional interceptors in the coming days.”

Mevlutoglu believes the Nov. 24 incident will lead to increased Russian military presence in Syria. Syrian airspace is congested with manned and unmanned aerial vehicles of Syria, Russia, Iran, the United States, the United Kingdom and France. In such an overcrowded and complex environment, it will not be easy for long-range air defense systems to distinguish between friend and foe; their operators will have to be extremely careful to avoid a friendly fire nightmare, he said.

If Russia wants to take revenge on Turkey, it can do so directly or indirectly. Directly means downing a Turkish plane. Indirect revenge could mean stepping up deliveries of weapons, intelligence and logistical support to the Kurdish nationalist Democratic Union Party (PYD) and/or the Kurdistan Workers Party and sabotage. The former would be a nightmare scenario. Russia would have to lure Turkish planes into Syrian airspace. The best bait would be to send Kurdish People's Protection Units (YPG) forces to the west of the Euphrates River — an area Turkey has persistently declared off-limits. On Oct. 25, Turkish warplanes attacked YPG units attempting to cross to the west shore of the river.

If it could persuade the PYD to cross the Euphrates, Russia would dominate the 98-kilometer (61-mile) Jarablus border, which is of crucial importance in the struggle against IS — and would also secure a strong position in retaliation for the Nov. 24 incident.

Other indications that things are heating up in the third tier include Turkey increasing its number of F-16s patrolling the Syrian border and reports that Russia is about to dispatch 10-12 Su-27s and Su-30s to Latakia.

No doubt IS will be most pleased when tensions in the third tier ease the pressure it is under from the other two tiers.