In addition to warplanes over Syria, cruise missiles are now carving out airspace. 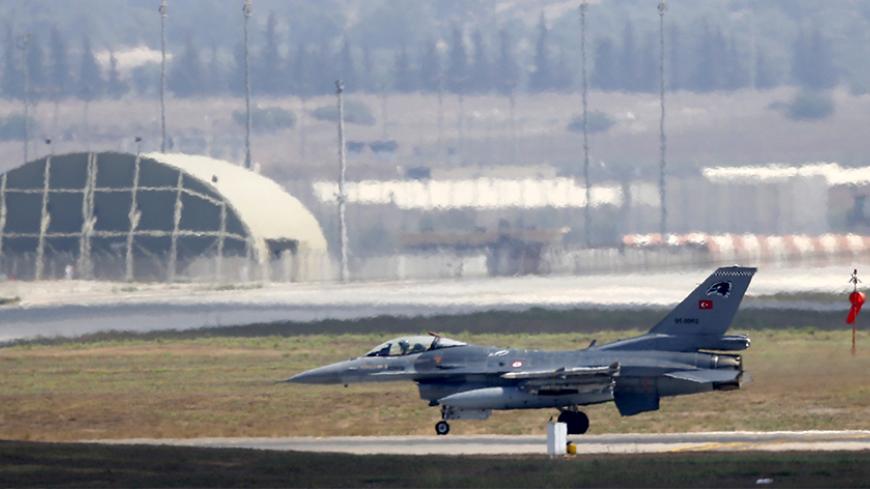 Russian military flights close to the Syria-Turkey border, an area already tense with air operations by the anti-Islamic State (IS) coalition, have heated up the skies over the region. First, the Turkish Foreign Ministry reported that Russian Su-24 and Su-30s had violated Turkey’s airspace in the Hatay region on Oct. 3. Then, the office of the Chief of the General Staff announced that an unidentified MiG-29 had locked its radar on a Turkish F-16 on air patrol on Oct. 4. The high command also reported that air defense batteries in Syria had locked their radar on Turkish F-16s flying along the border.

What do these incidents signify? Security analyst Arda Mevlutoglu told Al-Monitor that Russia is using harassment and intrusions to send the US-led anti-IS coalition the message “I am here” as well as probing the capabilities of Turkey and the coalition's air force.

Since the beginning of September, Russia has been delivering warplanes and helicopters to the Bassel al-Assad International Airport near Latakia. According to open sources, the following aircraft have been deployed: four Su-30SMs, 12 Su-24s, 12 Su-25s, six Su-34s, one Il-20M and 15-20 Mi-8 multipurpose and Mi-24 attack helicopters. The Su-30SM is for interception, interdiction and air superiority, the Su-24 and Su-34 for tactical bombing, the Su-25 for close air support and the Il-20M for electronic intelligence.

According to Mevlutoglu, this squadron definitely has the capacity to protect the Syrian regime. Ground operations at Hama and Homs with Russian air support have already begun. Russia’s land-based electronic intelligence elements and Il-20 planes are providing intelligence support to the Syrian army by detecting opposition signals and positions. This support has substantially diminished the combat effectiveness of the opposition forces.

With its modernization program, the Turkish Air Force (TAF) is becoming a major air power. In addition to improvements to its planes and ammunition, the TAF has made important strides in air warning and control, radar support operations as well as pilot training. For example, the Peace Eagle Air Warning and Control system provides Turkey with significant advantage. Turkey also has sufficient ELINT (electronic intelligence) and SIGINT (signal intelligence) capacity in addition to a powerful radar network watching Syria. Turkish national radar systems are integrated with NATO systems based at Kurecik that can monitor regional missile and air activities up to 800 miles.

The Russians are using Su-30 and Su-34 planes in the region. These warplanes are equipped with air-to-ground missiles as well as air-to-air missiles. They have a choice of missile ranges. The R-77 models have ranges that vary from 100 to 160 kilometers, and the R-24 has a range of 72 to 130 kilometers. Both are effective weapons.

There so far have been no skirmishes or dogfights between Russian and Turkish warplanes. The most hostile action to date has been the unidentified MiG-29's radar lock on Turkish F-16s. Security sources requesting anonymity told Al-Monitor that a plane's identity is established either visually or by radar. In this case, Turkey referred to the MiG-29 as unidentified because Turkish pilots did not have visual contact with the MiG-29, hence its reliance on radar data.

At the moment, Russia doesn’t have any MiG-29s in Syria. The few MiG-29s Syria has are based far from the Turkish border. This leads Mevlutoglu to think the Syrians want to participate in Russia's show of force.

On the possibility that Turkish radar confused a Sukhoi Su-30 with a MiG-29, Mevlutoglu said it is very unlikely, because Turkey has systems that can distinguish between these planes. There are also rumors in Ankara that Iran might have sent MiG-29s to support the Syrian regime. The other possibility is that Turkish radar did identify the MiG-29, but labeled it unidentified to send a message about how unsafe Syrian airspace has become with the plethora of coalition air operations and the arrival of Russian planes.

Mevlutoglu noted that while guidance control systems, target acquisition technologies and ammunition are important, uninterrupted maintenance and logistics are also vital. He said, “It is not easy to argue that the Russians are at the same level of maintenance as Western military, certainly not with the US. The Russian air force can offer serious tactical support to the Syrian regime for two to three months. After that period, Russia will have to cope with operating an overseas supply line and ensuring spare parts, maintenance and repairs of the planes. This is when we will see whether the Russian military has really updated itself.”

The best and worse scenarios

The best scenario regarding Syrian airspace is that although there may be occasional radar locks and face-offs due to congested air traffic, such incidents will not evolve into actual clashes, and any crises will be successfully managed. Here, Turkey faces an impasse: After Syria shot down a Turkish RF-4 in June 2012, Ankara toughened its rules of engagement for Syrian aircraft to respond with disproportionate severity. Thus, in March 2014 Turkey shot down a Syrian MiG-23 and a Syrian helicopter in May 2015 that officials said had violated Turkish airspace. Syria claimed the latter was an unmanned aerial vehicle.

The worst scenario would be if, intentionally or accidentally, planes make visual contact and engage, which could quickly develop into air combat with air-to-air missiles. Another scenario could be a missile attack from an unidentified plane. Also not to be ignored is the possibility of missiles fired from ground batteries triggering an air clash. Long-range missile operations have now been added to the heavy activity in Syrian airspace.

On Oct. 7, Russia fired 26 Kalibr-NKJ cruise missiles from warships in the Caspian Sea at IS targets in Syria. Without a doubt, the paths of these missiles, which are similar to US Tomahawk cruise missiles and used against ground targets, were watched carefully at NATO command centers.

Although the actors involved in ground combat in Syria are largely of Syrian origin, the contest in the sky has become a global affair. The intense plane and missile activity in congested airspace will require all the countries with planes in the area to consider crisis mode. One can only hope that pilots flying along the Turkish-Syrian border and their ground control commands are skilled enough to handle any crisis situations they might encounter.