With restrictions set to come off in the medium term, Iran has an even greater incentive to modernize its antiquated air force. 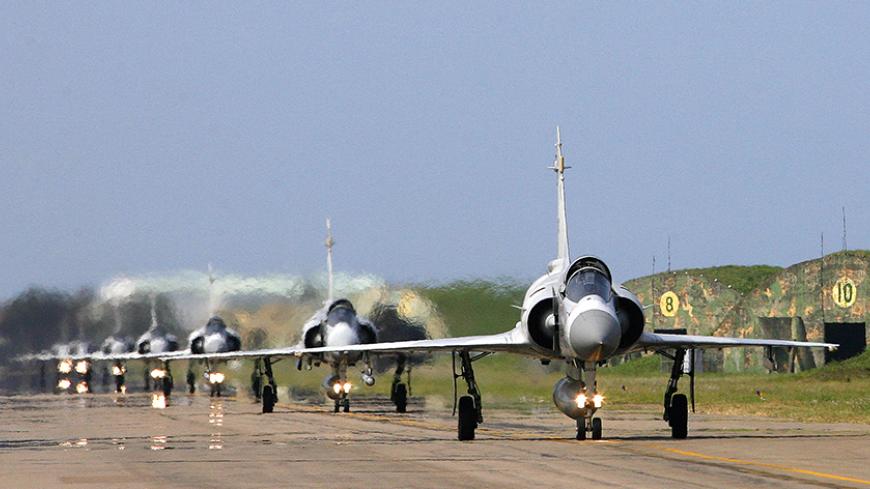 A group of Mirage fighter planes prepares to take off in Hsinchu, Taiwan, Aug. 29, 2008. - REUTERS/Nicky Loh

There were important security aspects to Laurent Fabius’ visit to Iran last week — the first by a French foreign minister in 12 years. After the trip, Iranian government spokesman Mohammad-Bagher Nobakht said that “France could satisfy our need for Mirage warplanes ... buying new Mirage planes is the first priority of the Islamic Republic of Iran Air Force [IRIAF].”

During the first Gulf War, Iran gained access to a small number of Iraqi Dassault Mirage F-1 warplanes. The aircraft were moved to Iran from fear of destruction in dogfights with more modern Western planes. Rather than returning them, Iran seized the aircraft as part of compensation for its 1980-88 war with Iraq.

Iran now possesses 24 Mirage F-1BQ and F-1EQ planes. It is not clear exactly how many of these fighters are operational. From the very beginning, Iran has had many problems in operating them. As the plane radars are designed for French and American air-to-air and air-to-ground missiles, Iran had for years serious problems with supplies, installation of radar, available missile synchronization and pilot training. However, it has been able to operate the F1 aircraft using domestically made missiles and making some alterations to the radar as well as the low-altitude navigation and infrared targeting systems.

Speaking on condition of anonymity, an IRIAF major told Al-Monitor, “Iranian pilots are usually not interested in flying Mirage planes. These aircraft aren't suitable for our air force. IRIAF squadrons consist of Russian and American equipment. I don't think that our Ministry of Defense wishes to purchase French aircraft for our air force. We have a lot of weaknesses in the air force fleet; our fourth-generation fighters, such as MiG-29, have not been upgraded to the SMT mode, our F-14s are still 'A' models and our close air support planes, such as F-5 Tigers, are so old. The reality is that our enemies around the region have the most modern American and Russian warplanes. It's clear that our air force needs new planes, but whatever our potential procurement, I'm sure of that it will not be French Mirage fighters!”

Apart from the issue of international restrictions on arms sales to Iran, the Islamic Republic is not likely to purchase Mirages for several reasons.

First, the latest version of the Mirage is 2000-5EI, which France stopped producing in 2007. Iran cannot buy new Mirage jets as production lines have long been halted. Therefore, two scenarios are probably being considered; first, supplies of modern equipment and spare parts from Dassault Aviation, and second, procurement of Mirage 2000 fighters currently in service in the French air force. The second scenario is conceivable, as France is replacing Mirages with Rafale fighters.

Second, Russian warplanes are a more likely option for Iran. Last month the commander of the Iranian navy visited the 2015 Russian Navy Arms Expo. During the visit, Iranian military sources said that the Russians requested an arms procurement list from Iran. Additionally, Iran’s defense minister, Brig. Gen. Hossein Dehghan, met with his Russian counterpart during his recent visit to Moscow, and the two sides signed a military cooperation agreement. Of note; Russia has been the only country that has sold warplanes (MiG-29s and SU-24s) to Iran after its 1979 Islamic Revolution. Hence, Iranian commanders have more confidence in Russia than Western countries such as France or the United States. Moreover, over recent years, the Iranian armed forces’ doctrine and equipment have changed from Western to Chinese and Russian.

Third, Mirages are multirole fighters. In terms of air defense, Iran has made significant investments in surface-to-air missiles, guns and also a wide spectrum of long-range radars. Hence, Iran does not need close support fighters for potential dogfights. This is particularly the case as some Iranian squadrons consist of interceptor aircraft such as the F-14A and SU-24, which have the capability to enter dogfights from afar. If Iran were to buy a number of Mirage 2000 fighters, it would need to sign additional contracts for related weapons supplies, aviation infrastructure and maintenance engineers. This means the financial cost of this option would be infeasible.

It is clear that the Iranian air force’s fleet is outdated and weak. The commander of the Iranian army’s ground forces, Brig. Gen. Ahmad Reza Pourdastan, has explicitly stated that Iran “needs to buy new warplanes and helicopters.” Mindful of the considerations outlined above, it is likely that Iran will be supplied with Russian warplanes once procurement is secured. There are several more factors supporting this assessment.

During the past two decades, Russia has helped Iran construct aircraft maintenance and production facilities. The Islamic Revolutionary Guards Corps Aerospace Force (IRGC AF), which operates parallel to IRIAF, uses only Russian aircraft such as the SU-25 Frog Foot and MIL helicopters. Moreover, air-to-air and air-to-ground missiles developed by Iran in recent years have been based on Russian and Chinese technology. It is therefore clear that both the IRGC AF and IRIAF are equipped to better adapt to new Russian warplanes as opposed to Western aircraft.

Furthermore, China — like Russia — has enjoyed good military relations with Iran over the past three decades. During the Iranian navy commander’s visit to China in October 2014, the two sides agreed on military cooperation, and the Chinese defense minister said that China sees Iran “as a strategic partner and we are looking to increase our military relations in terms of training and arms supplies.” Yet, China is an unlikely source for new warplanes for Iran. Chinese fighters such as the J-10 and J-17, which Pakistan has purchased, are old multirole aircraft. The newer fifth-generation J-20 fighter is not an option for Iran either; it’s still in the final testing phase and China won’t sell its latest military technology to another country.

Expressions of interest in French jets aside, such dealings are unlikely for military, engineering, financial and political reasons. Instead, for the very same reasons, Russia could be a possible source for new warplanes. Iran currently has interceptor fighter squadrons (F-14 & SU-24), middleweight bombers (F-4 & SU-25) and close air defense fighters (F-5, HESA Azarakhsh, F-7A and HESA Saeqeh). IRIAF will therefore not need to purchase this type of aircraft in the short term. Instead, advanced multirole fighters is the main necessity for the regular Iranian air force. It is indeed possible that, over the next few years as international restrictions fade, Iran will buy multirole fighters such as the SU-30, MiG-35, MiG-31 or upgrade its MiG-29 fighters to the SMT version. All in all, Iran’s air force is set for a badly needed revamping in the medium term.