'Special messages' aside, Iran's S-300 missiles still up in air

Despite the increasing regional cooperation between Iran and Russia, the Tehran-Moscow relationship is marred by distrust over the long-stalled S-300 air defense missile deal. 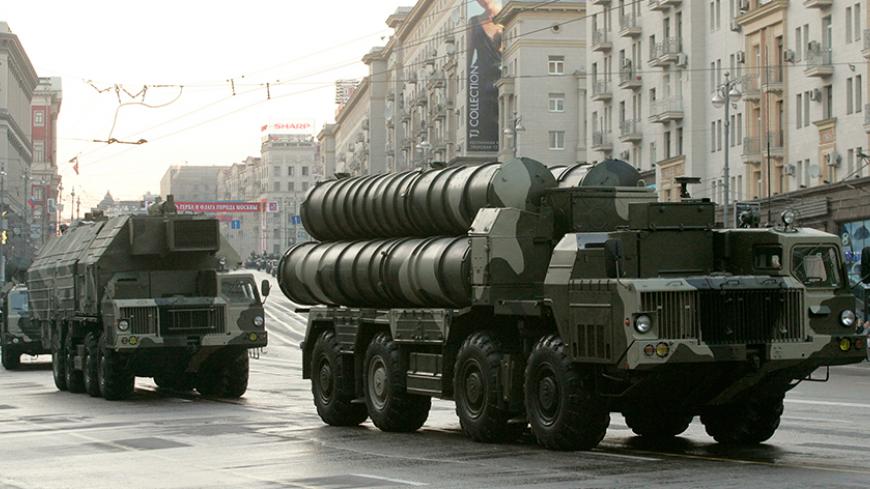 Russian S-300 missiles move along a central street during a rehearsal for a military parade in Moscow, May 4, 2009. - REUTERS/Alexander Natruski

TEHRAN, Iran — Prior to his recent trip to Russia, Iran's Defense Minister Brig. Gen. Hossein Dehghan announced that he will discuss the long-stalled transfer of the S-300 air defense system as well as the possibility of reaching an agreement on the purchase of multirole Sukhoi Su-30 fighter jets. While in Moscow, he met with senior Russian officials, including his counterpart, Russian Defense Minister Sergei Shoigu, and President Vladimir Putin.

After the Feb. 16 visit, Russian media outlets reported that the first batch of S-300 missiles had been shipped Feb. 17 via the Caspian Sea, from Astrakhan in Russia to Bandar-e Anzali in Iran, and had officially been delivered in the presence of Dehghan himself. Sputnik News Agency quoted Russian sources on the latter and later published an interview with Deputy Chief of Staff of the Iranian Armed Forces Maj. Gen. Mostafa Izadi, in which Izadi confirmed that Russia has indeed delivered the first shipment of the missiles.

However, in spite of widespread expectations in Iran that Russia would take the first step toward implementing the S-300 deal, in order to rebuild trust, the Putin’s spokesperson suddenly announced that the missiles will not be delivered since Iran has not yet paid for them. The Russian reasoning was that it is therefore too soon to deliver the missiles. Although the reasons for Moscow’s sudden turnaround are not wholly clear, it can be argued that it has further increased Iranian distrust of the Russians.

In regard to the possibility of Iran buying new fighter jets from Russia, Dehghan announced, “We know how many Sukhoi Su-30 fighters we are planning to buy. However, for now, we shall not announce the number.” Previously, some sources had mentioned the possibility of Iran buying Chinese J-10 fighters or French Mirage fighters. However, both of these possibilities were denied by Iranian military officials. Indeed, in a recent interview, Dehghan noted, “I have seen these fighters myself, but we are not planning to purchase the Chinese fighters.”

Some Russian reports suggest that Tehran is likely to sign an $8 billion contract with Moscow for the purchase of military equipment. If this is true, the question is which kind of changes to Iran’s military capabilities the procurement of Sukhoi Su-30 fighters and the S-300 air defense system will bring about. What are the advantages of these weapons systems compared to those used by Iran’s regional rivals? Will purchasing military equipment from Russia enable Iran to fill the gap in its capabilities compared to rivals such as Israel, Turkey and some Arab states?

Following the 1979 Islamic Revolution, sanctions were imposed on the Iranian air force. The Islamic Republic was thus only able to purchase a limited number of J-7 fighters, MiG-29, Sukhoi-24 and Sukhoi-25 for the Islamic Revolutionary Guard Corps Aerospace Forces. Consequently, the backbone of the Iranian air force is made up of old American fighters such as Phantoms, Tigers and Tomcats. Meanwhile, Iran’s regional rivals have rapidly developed their air forces, with all of them currently in possession of advanced fighters such as the F-15, F-16, F-18, Eurofighter Typhoon and Rafale. These countries are additionally slated to be equipped with the fifth-generation F-35 fighter over the course of the next decade. A mere cursory glance at electronic war capabilities, active phased array radars, armament systems, maneuverability, endurance and radar cross sections shows that the Sukhoi Su-30 is not capable of successfully confronting the aforementioned Western warplanes in a heavy aerial battle.

Admittedly, compared to the Western fighter jets, the Sukhoi Su-30 has two relative advantages; namely, a long-range high-resolution radar and animated engine output, which helps its high agility. However, in other areas, and especially considering the weaknesses of Russian-made electronic armor and its very large radar cross section, Sukhoi fighters will not stand much of a chance against highly advanced radar and anti-radar systems or fourth and fifth generation fighters, many of which are currently in operation in the region. Nonetheless, the S-300 air defense system is still capable of dealing with rather advanced fighters, and it can partly compensate for weaknesses in Iran’s defenses.

In terms of offensive capabilities, Iran is facing serious technological problems. In this vein, Russian failures in post-sale services and upgrade operations should also be added to the list of problems. For instance, the Iranians continue to face plenty of issues with the repair and maintenance of their Sukhoi-24 and MiG-29 fighters.

President Hassan Rouhani’s administration is aware of these problems and is looking for an alternative to buying military equipment from Russia. Some rumors in Tehran have it that Iran is desperately trying to gain access to the technology necessary for designing and manufacturing these advanced fighters on its own. Perhaps the Russians have gotten the point, as soon after Dehghan’s return from Moscow, Shoigu appeared in Tehran on an “unexpected” visit. Reports say the Russian official brought a “special message” from Putin to Rouhani and discussed Syria as well as bilateral matters.

If anything, it seems as if Moscow is seeking to keep Tehran as a customer by resorting to engaging in symbolic measures. For instance, while failing to live up to his commitment to deliver the S-300 missiles, Putin is, through measures such as personally bringing a special gift to Supreme Leader Ayatollah Ali Khamenei and dispatching an envoy to Tehran with a special message, trying to tell the Islamic Republic that he is a strategic ally of Iran. This is while the Rouhani administration is becoming increasingly pessimistic about Putin’s measures because of his failure to live up to his commitments.

Indeed, Iran has expressed a desire to forge constructive cooperation with any country, and especially those of the West. In this vein, if the sanctions on arms deals are lifted as scheduled in the next five years, Iran will more than likely look to expand research and development cooperation with international companies in order to obtain the technology necessary for designing advanced fighters that are capable of dealing with threats to Iran. The fact that the Iranians continue to buy equipment from Russia, while fully aware of the problems it entails, only goes to show that Western countries remain reluctant to sell conventional military equipment to Iran. Ultimately, the outcome of the latter is that the Russians are bound to generate tens of billions of dollars in arms sales while their Western rivals will be deprived from such revenues.