Will Turkey, Russia fan flames into an inferno?

Moscow, Ankara ramp up their "he said, she said" exchanges with ever-stronger accusations. 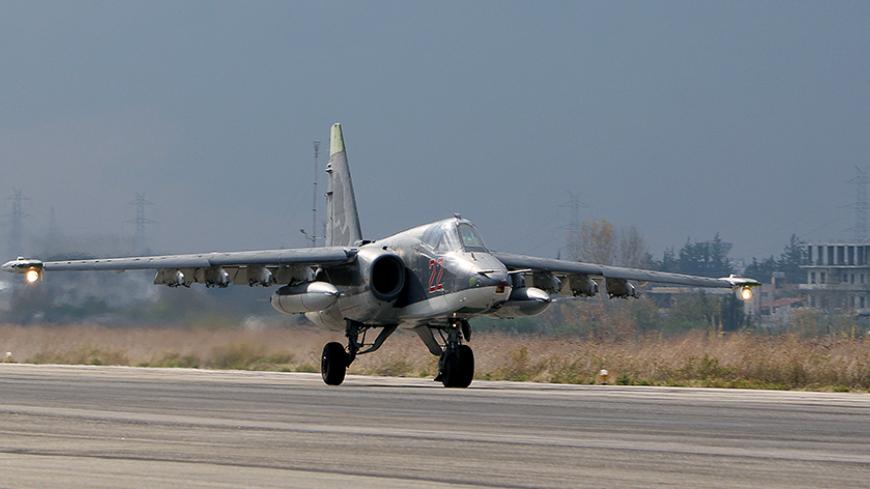 A Russian Sukhoi warplane lands at the Hmeimim military base in Latakia province, in northwest Syria, Dec. 16, 2015. - PAUL GYPTEAU/AFP/Getty Images

On Jan. 30, Turkey said its airspace was again violated by a Russian warplane. A statement by the Turkish Foreign Ministry said a Russian Su-34 warplane on Jan. 29 had violated Turkish airspace despite repeated warnings in Russian and English.

The statement said this was yet another concrete indication of Russia’s escalation despite clear warnings by Turkey and NATO. The statement said, “We are calling on Russia clearly to act more responsibly and not to violate NATO airspace.” It warned that Russia would bear full responsibility for any consequences that could arise from these “irresponsible actions.”

The Russian ambassador in Ankara was summoned to the Foreign Ministry on the night of Jan. 29 to receive a protest of this violation. In turn, the Russian Defense Ministry called the claims "pure propaganda," according to the statement.

That incident followed a Turkish F-16's downing Nov. 24 of a Russian Su-24 warplane that was giving air support to ground forces operating in Syria’s Bayirbucak region.

What makes the more recent violation different, however, is the type of the Russian plane involved. The Su-34 Fullback was armed with R-77 and R-73 air-to-ground missiles and designed for air-to-air combat. After the Nov. 24 downing, Russia had announced that Su-34s were now flying combat air patrols near the Turkish border.

The Su-34 is a tactical bomber that was being developed in the late 1980s to replace the Su-24. Its main function is to hit targets deep behind front lines at long distances with sophisticated guided missiles. It is fully equipped with advanced navigation and targeting systems. Su-34 development and mass production was stalled for a long time because of the collapse of the Soviet Union and consequent economic problems. The project was reactivated in the early 2000s and mass production began.

According to Arda Mevlutoglu, an aeronautics and space engineer, today Russia is believed to have about 100 SU-34s in its arsenal. He said there are six Su-34s and 12 Su-24s in Syria, supported by 12 Su-25 close air support planes.

“Russian air power in Syria relies on Su-34s when attacking important ground targets," he said. "Now it appears that they are using Su-34s also against targets close to the Turkish border. This signifies that Russia is now more cautious about the possibility of encountering Turkish F-16s.”

Mevlutoglu’s disclosures can be best interpreted in the following way: Russia has upped its game by using Su-34s that have interception capability in critical operational missions near the Turkish border, and is saying that if Turkey challenges the planes, it will have to pay the price.

We hear about airspace violations only if the violated country reports it. Although Russia denies that it has violated Turkish airspace, if Turkey says it was violated, it means Turkey wants the international public to know about it. The intention is hidden in the emphasis on ‘‘NATO airspace” in the Turkish Foreign Ministry’s statement. That is how Turkey wants to get the support of NATO — in particular, the United States. Ankara believes Russia was probing the strength of Turkey-US and Turkey-NATO ties.

Another element that sets the latest airspace violation apart from earlier ones is its location. Although Ankara has not announced the location, observers believe it took place in the Turkish border region that faces the Azaz-Munbij front, which is currently controlled by the Islamic State. If this is accurate, Russia is telling Turkey openly that it seriously intends to maintain the de facto no-fly zone it has established over the Jarablus-Munbij areas, which are also of major concern for Turkey.

Russia’s first airspace violation with the Su-34 over the critical Azaz-Munbij front was clearly a deterrent message against Turkey. Turkey, by responding with strong words, had indicated that it has seen the Russian move and was notifying the United States and NATO that their support is required.

If Russia is serious in its intentions, there will probably be more hot contacts between Russian Su-34s flying on the Azaz-Munbij front that includes Jarablus, and the Turkish F-16s that are flying round-the-clock patrols on the Turkish side.

Can Ankara-Moscow relations be normalized? According to Russian expert Habibe Ozdal of the Ankara-based International Strategic Research Agency, more time is needed to know. Commenting on the airspace violation, she accurately predicted some new "aftershocks" in bilateral and regional issues are unavoidable, She said, "Although the opposing views of Turkey and Russia about the PYD’s [US-supported Kurdish nationalist Democratic Union Party] participation in the Geneva talks are known, these Russian moves in Syria escalate tensions. It is clear that Russia is not targeting Turkey militarily. But at this phase there is no room for mistakes in bilateral relations. All military, political, social and cultural relations between Ankara and Moscow have been suspended, but meanwhile, the process to determine the future of the Middle East continues. It is obvious that the crisis in relations won’t serve the interests of both countries.”

She said both countries will have to urgently carry out damage assessments and come up with ways to repair the damages.

Turkey and Russia need to continue cooperating on issues like the struggle against IS and projects such as the Turk Stream natural gas pipeline. But placing combat-ready Russian Su-34s and Turkish F-16s across from each other along the Turkish border is asking for trouble, like lighting a match next to a stockpile of gunpowder.