Russia’s decision to deploy its S-300 air defense systems in Syria is a major step toward dominating Syrian airspace, but to what extent will it affect Israel? 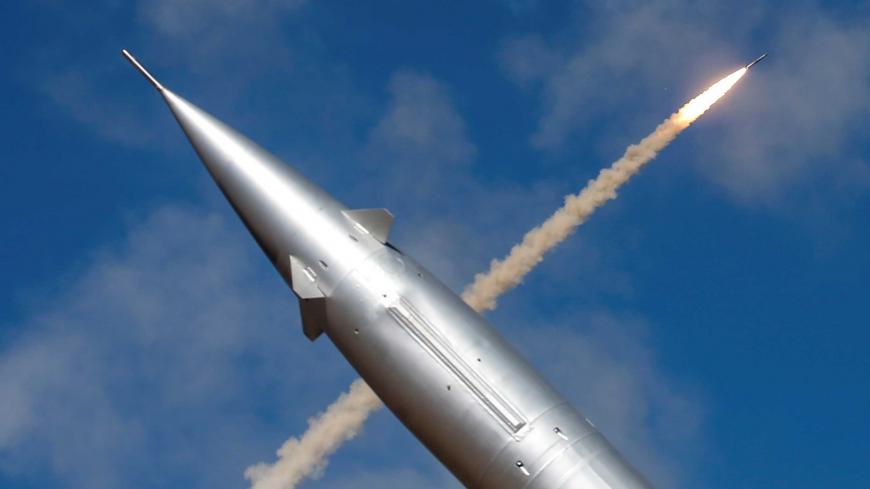 An anti-aircraft missile is seen in front of another missile that has been launched from an S-300 surface-to-air missile system during the International Army Games 2017, Astrakhan, Russia, Aug. 5, 2017. - REUTERS/Maxim Shemetov

Russia is taking serious steps to control Syrian airspace. After Syria shot down one of Russia's high-tech "Coot" planes Sept. 17 off the Syrian coast — using Russian-made missiles, no less — Moscow's plans to prevent other Syrian missteps by giving the country better weapons could drastically change the balance of power in the region.

The downing, in which 15 Russians were killed, resulted from Syrian anti-aircraft batteries attempting to engage four Israeli F-16s that were striking targets in the region at the time. A Syrian S-200 surface-to-air (SAM) missile accidentally hit the larger, slower Russian Il-20M surveillance plane instead of the Israeli planes. According to the Russian Ministry of Defense, the Israeli F-16s were using the Russian plane as cover. This is why Russia indirectly blames Israel for the incident.

Although Russia has not yet revealed the technical aspects of the incident in which its plane was shot down, there will be ramifications.

In less than two weeks, Moscow plans to provide Syria with S-300 missile systems and take other potential game-changing precautions to impede Israel’s actions in the sky above Syria.

The Russian military will also supply better control systems to the Syrian Air Defense Force — systems that typically “are only supplied to the Russian Armed Forces,” Russian Defense Minister Gen. Sergei Shoigu announced. This will allow Syria and Russia to integrate their military assets, giving the Syrians better targeting information.

“The most important thing is that it will ensure identification of Russian aircraft by the Syrian air defense forces,” he said.

The downed plane, a Russian Il-20M type Signal Intelligence (SIGINT) and Electronic Intelligence (ELINT) plane, better known by its NATO designation of Coot, was equipped with high-tech equipment such as surveillance radar, electronic eavesdropping gear and optical and infrared sensors. It was shot down with a Russian-made S-200 missile 22 miles off the Syrian coast as it was in a descending pattern. It became the fourth Russian plane shot down on duty in the Syrian civil war, bringing the total personnel lost to 58. A Russian SU-24 was shot down by a Turkish F-16 in November 2015, an SU-25 was shot down Feb. 3 with man-portable air-defense systems (MANPADS) by opposition fighters, and an AN-31 cargo plane was brought down March 6, reportedly by Syrian opposition MANPADS.

The S-200, an older generation of SAM that isn’t even equipped with a friend-or-foe identification system, acquired its well-deserved reputation as a formidable weapon after it was used to shoot down an American U-2 spy plane in 1960. It also brought down a US Nighthawk “stealth” F-117 plane in 1999 during the Bosnian war and shot down an Israeli F-16I a few months ago. But in the latest incident over Syria, Russia didn’t disclose whether the S-200 was manned by Russian or Syrian soldiers. Moscow also didn’t explain why its plane couldn’t evade the S-200 over Syria. It’s also not clear if the Russian S-200 battery commander knew there was a Russian plane in his range.

What is known (or strongly speculated) is that Syria has an excessive number of old-model S-200 missiles in its arsenal and wants to replace them with newly made, S-300 GUR and BUK high- to medium-altitude air defense missiles. Instead of using S-200s selectively, Syrians use SAMs as ballistic missiles — firing them as saturation ammunition. That’s why it wasn't really a surprise that the missiles were able to down the II-20M plane. S-200 main engine parts frequently fall into southeastern provinces of Turkey, miles away from areas that Israeli attacks — indicating this kind of free firing.

Hakan Kilic, a ballistic missile and air defense expert, told Al-Monitor: “The fact is, there are very few countries in the Middle East and even in the world with such intense, multilevel air defense systems as Syria. Although Syria has a feeble air force with few planes, it has a very potent air defense missile system infrastructure based on the [most modern], Russian-origin systems.”

He continued: “The Syrian air force realized it can't challenge the Israeli air force with obsolete Russian-made planes, and opted for ballistic missiles and air defense systems as deterrents. But in time, Israel found solutions to them and also developed its responses. First Israel developed the world’s most advanced, multiple-level and intensified ballistic missiles systems consisting of Iron Dome, David’s Sling and Arrow 2 and 3. It flies electronic warfare suites with F-15I and F-16Is specifically modified for electronic warfare — so much so that the US has agreed for Israel to modify the latest F-35 to deploy an electronic warfare suite for its own use, similar to F-35I Adir. This plane, which looks the same as the F-35A and has similar technical specifications, makes Israel the country with most advanced electronic warfare capabilities, after the United States.”

Another measure announced by the Russian Defense Ministry is a blanket of electronic countermeasures to be deployed over the Syrian coastline that will suppress satellite navigation, onboard radar systems and communications of warplanes attacking targets on Syrian territory. When Syria's air defense system couldn't cope with Israel’s electronic warfare capabilities, Syria felt the need for the S-300s. According to Kilic, with this move Russia wants to cover Syria's entire airspace. It's not a secret that, although some S-300 and S-400 batteries have radar ranges of 400-600 kilometers (about 250-370 miles), the S-400 model that Syria has now has a range of only 250 kilometers (155 miles).

As the detachment to be deployed in Syria is defined as an "S-300 eight battery," it will be made up of one company or unit. We are talking of a system with an independent radar and command center with eight batteries, each with four missiles, for a total of 32 launchers, or with missiles ready to be fired. These are Almaz-Antey tracked vehicles with P/V/PT/PS/PYB/PMU1/PMU2 models installed in an SA-10 Grumble identified as SA-12 Giant. S-300PMU1 is called SA-20 Gargoyle, which is very effective against planes, drones and cruise missiles. However, the extent of its effectiveness as advertised in the company’s literature is subject to much debate and has yet to be proven on operational missions.

The question now is whether the S-300 to be deployed in Syria will have more of an effect on Turkey or Israel. Ankara does not want these systems to be deployed near Aleppo and Idlib.

According to Kilic's reports, the batteries to be sent to Syria will be ready in less than two weeks. That's a sign that they won't be modernized versions, but rather what's available in stock. Although it's been predicted that the S-300 to be sent to Syria will be mounted on V-series armored, tracked vehicles because of terrain conditions, now there are reports that that they will be P-series models to be mounted on wheeled trucks.

S-300PMU2 is a 15- to 20-year-old system that is inferior to the S-300 and S-400 systems currently in use. If instead of the S-300V4, Russia sends the S-300PMU2, the following will come to mind: Israel had secretly upgraded some of the S-300PS/S-300V1 models Ukraine had. When Russia annexed Crimea in 2014, Moscow seized some of these missiles. They could have been sent to Syria as a symbolic gesture.

For almost six years, Israel has conducted hundreds of attacks on Syria thanks to the combination of offensive actions and good diplomatic relations with Russia and the United States. Now the final question: Will the deployment of S-300s into Syria mark the end of Israel’s airstrikes in Syria?

My brief answer: Of course not!

Correction: Oct. 2, 2018. An earlier version of this article mistakenly stated Ankara wants S-300 air defense systems to be deployed near Aleppo and Idlib. Instead Turkey opposes this location.