Is Russia’s S-300 delivery to Syria a game-changer?

Russia's deployment of S-300 missile defense systems to Syria has both political and military significance, but might not necessarily change the overall balance of forces with regard to Israel. 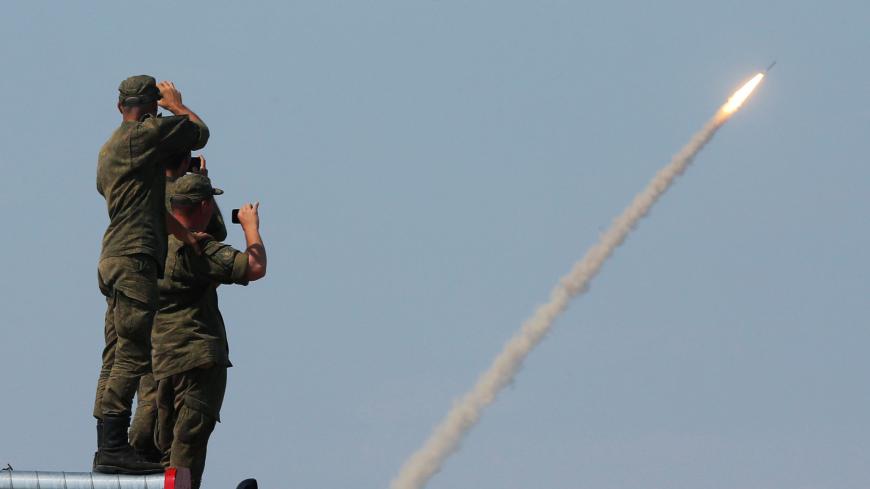 MOSCOW — Russian Defense Minister Sergei Shoigu informed President Vladimir Putin on Oct. 2 that the Russian army had completed supplying the S-300 missile defense system to Syria. The move is intended to boost security for Russian forces in the country following the downing of an Ilyushin-20 reconnaissance plane over the Mediterranean by Syria's air defense system stemming from what Moscow calls an Israeli provocation.

Shoigu said in a televised statement, “[The installation] includes 49 units of equipment. We have also significantly improved our radio electronic jamming, added some new additional equipment. Today we are in control of the close-in zone of 50 kilometers [31 miles], we also control the far field, the main direction from which we approached the Syrian territory by 200 kilometers. As for the unified air defense control system, we’ve also started supplying [necessary] equipment and are planning to finish all the activities associated with training of the crew and knitting a unified system by Oct. 20.”

The equipment, according to Shoigu, included radars, control vehicles and four launchers. On Oct. 8, Russia’s TASS news agency reported details of the deployment. According to the agency’s source in the Russian military, Moscow delivered three battalion sets of S-300PM systems with eight launchers each as well as more than 100 surface-to-air guided missiles for each battalion.

The source, speaking not for attribution, said, “These systems were previously deployed at one of the Russian aerospace forces’ regiments which now uses the S-400 Triumf systems. The S-300 systems underwent capital repairs at Russian defense enterprises, are in good condition and are capable of performing combat tasks."

Moscow and Damascus signed an agreement on the supply of S-300 systems to Syria in 2010, but the Kremlin put implementation of the deal on hold over Israeli security concerns. In the days after the Il-20 incident, in which 15 Russian service personnel died, the decision to move forward with the agreement was seen as a way to restrain the movement of the Israeli air force and decrease the likelihood of additional incidents with the potential of producing Russian casualties.

Leonid Nersisyan, a military analyst and editor-in-chief of the New Defence Order Strategy magazine, argues that the deployment of three battalions of the S-300PM is meant to serve both Moscow's political and military goals.

“This is a rather harsh demonstration of the Russian stance vis-a-vis Israeli airstrikes in the immediate Russian zone of influence,” Nersisyan told Al-Monitor. “Latakia has been struck for the first time. It’s also a message that neglecting the mechanism of mutual notification over the skies of Syria is unacceptable. As far as the military component is concerned, the three divisions are not enough to cover all of Syrian territory, but just enough to secure the coastal areas. These systems will complicate the activities of the Israeli air force, making them work from greater distances, which should lower the efficacy of their strikes. Besides, the associated risk of losing aircraft now increases since unlike the aged S-200, the S-300PM can effectively engage low-flying targets.”

The technical data sheet for the S-300PM states that the system is capable of eliminating advanced aircraft, including planes using stealth technology, medium-range ballistic missiles, tactical and cruise missiles, airborne early warning and control aircraft as well as reconnaissance and strike systems. Nersisyan noted, however, “This certainly doesn’t mean Israel cannot overcome these systems. Should Jerusalem decide to suppress them, they will be able to do so, but at a price.”

The analyst further stated, “Although Russia-Israeli ties may now be more chilly, neither party is interested in their rupture or a confrontation, as it will further destabilize the region toward new, unpredictable developments.”

Andrei Frolov, a military analyst and editor-in-chief of the Russian journal Eksport Vooruzheny (Arms Export), believes the move by the Russian Defense Ministry is rather symbolic and a way to “save face and flex muscle.”

“The de-confliction track between Russia and Israel has never ceased to function, so the move is unlikely to be a mega game-changer,” Frolov told Al-Monitor. “A lot, however, will depend on where exactly the [S-300] systems are going to be deployed and how they will be integrated into Syria’s overall air defense. Will it be manned exclusively by Syrians or together with Russians? We need some more time to see.”

Meanwhile, Israeli Prime Minister Benjamin Netanyahu said on Oct. 7 that he will meet Putin “soon,” to discuss further security coordination over Syria. Moscow reportedly rejected at least two Israeli proposals for meetings after the Il-20 incident. It declined to host a delegation led by national security adviser Meir Ben-Shabbat or to accept Defense Minister Avigdor Liberman or Netanyahu himself, saying that it “preferred for contacts to remain at the professional level.” Now that Russia has made the move it felt obliged to make after the Ilyushin's downing, Moscow may be more open to high-ranking contacts. And on Oct. 9, Netanyahu met with Russian Deputy Prime Minister Maxim Akimov in Israel to discuss economic partnerships.

Despite apparent differences in approach to conflict management between the Defense Ministry and the Kremlin, the ultimate concern in Moscow is to make sure its response, though harsh and just — as it should be, in Russia’s view — nonetheless does not corner Netanyahu at home, especially in light of his facing criminal charges and political difficulties in upcoming elections. Putin’s “good chemistry” with Netanyahu has proven an asset that is considered to be in the mutual interest of the two countries, which have faced a sudden stress test.

That Israeli jets have not bombed Syria in the last couple of weeks is understandable, since doing otherwise under the current circumstances would mean poking the Russians in the eye. Yet, it does not mean that Israel will hold back on strikes should it see movements of pro-Iranian forces as menacing. The decision-makers in Moscow are well aware of this. Thus, the situation will continue to demand that both parties maintain the de-confliction line and follow the rules of engagement as well as look for a “happy medium” on Iran within the context of Russia believing that it has done enough and Israel being certain that there can never be “enough” when it comes to restraining Tehran in Syria or Lebanon.

In this regard, the deployment of S-300s may not change things dramatically in the immediate term, but it may be enough of a deterrent to help negotiate any amendments that Putin and Netanyahu seek for the new-old playbook.