Moscow doubled down on its harsh rhetoric vis-a-vis Israel over the downed plane by promising to deploy the S-300 and other advanced weapons in Syria. 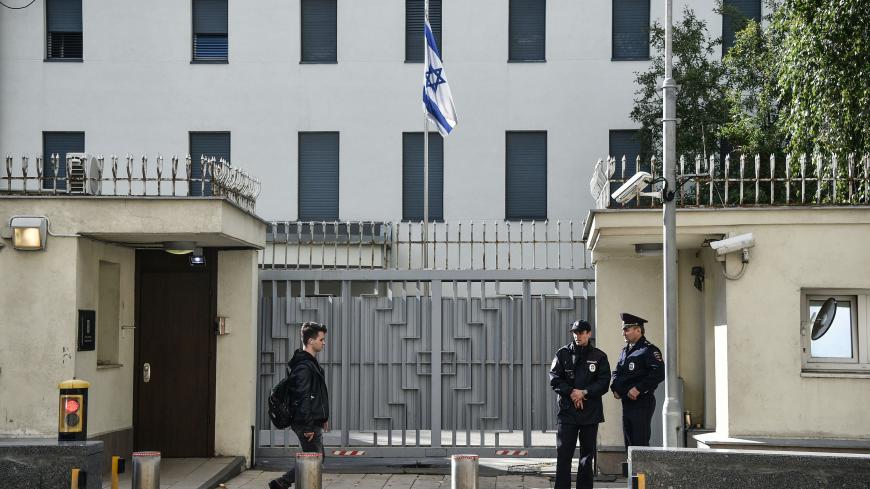 Following the visit of Israeli delegation led by air force commander Amikam Norkin, the Russian Defense Ministry waited before reporting its own version of the events in Syria that caused the death of 15 Russian service members aboard the Il-20 reconnaissance aircraft.

Moscow insists that its initial conclusions are accurate, meaning that Israel is considered fully responsible for the tragedy. The Defense Ministry statement was unprecedented in its harshness. Moreover, the words were immediately reinforced by actions: In two weeks Moscow will provide Syria with S-300 missile systems and take other precautions to impede Israel’s actions in the sky above Syria.

On Sept. 23, the ministry's chief spokesman, Maj. Gen. Igor Konashenkov, accused Israel of “criminal negligence” and “ungratefulness.” During the presentation, describing the events in the sky above Latakia minute by minute, he disclosed some previously unknown facts about Russia and Israel’s interactions in Syria, such as the search for the bodies of Israeli soldiers, the preservation of Jewish cultural heritage in Aleppo and issues involving Israel’s security, including the removal of pro-Iranian troops from the border. It had become known earlier that Moscow had persuaded Tehran to move the groups loyal to the Islamic Republic 85 kilometers (53 miles) east of the Golan Heights; however, recently the Defense Ministry suddenly changed the required distance to 140 kilometers (87 miles). Konashenkov said Moscow always tried to meet Israel’s requests only to suffer from “hostile actions” of the country’s air forces.

Israeli military officers objected to the report their Russian counterparts presented. Moreover, the Israeli media accused Moscow of lying and distorting the facts. Seeking the guilty may not matter all that much at this point, but there is a strong blueprint behind Russia’s rhetoric and tone toward Israel.

The Defense Ministry mentioned “hostile actions” twice during the week. The term was first used Sept. 18, the day after the death of the Russian airmen. On Sept. 17, the Il-20 was shot down over the Mediterranean Sea by the Syrian S-200 air-defense system when four Israeli F-16 fighter jets were attacking a facility in Latakia near a Russian air base in Hmeimim. The day after the incident, the Russian Defense Ministry claimed that Israeli pilots had put the Il-20 under the fire of Syrian air-defense systems, emphasizing that Moscow reserved the right to “respond adequately.” This statement sounded ambiguous enough to be interpreted in a variety of ways.

Immediately after the statement had been made, a number of high-level Russian politicians condemned Israel, suggesting a break in relations and even retaliation. The appeals to ban Israel from the sky over Syria were the strongest. However, Russian President Vladimir Putin cooled tempers significantly, dubbing the incident “a series of tragic coincidences.” Nevertheless, it was too early for anyone interested in maintaining the status quo in Russian-Israeli relationships to relax. Putin added that the Defense Ministry’s statement had been approved by him, although he instantly decreased the variety of probable response measures. The president explained quite clearly that they should be aimed at ensuring the safety of Russian soldiers and facilities in Syria, promising, “We will make steps everyone will notice.”

During the Sept. 23 briefing, Konashenkov basically warned Israel. “The command of the Russian group of forces in the Syrian Arab Republic has repeatedly met Israel’s requests to allay their concerns about some sensitive military equipment items Russia had supplied to Syria being handed over to a third party,” he said, hinting that this would no longer happen.

First, Syria will be provided with S-300 missile systems. Shoigu said that in 2013, Russia had suspended the supply of S-300s to Syria at Israel’s request, when the weapon had been already prepared for shipping and Syrian soldiers had finished their training. “Now the situation has changed, and this is not our fault,” the minister said.

Second, Syrian command posts and air-defense units will be equipped with automatic control systems previously available only to the Russian armed forces. This will allow all Syrian air-defense assets to be controlled from a common center, enabling the monitoring of the situation in the air and prompt targeting. “The main point is that Syrian air-defense systems will have a guaranteed ability to identify all Russian aircraft correctly,” Shoigu said.

The third measure is the radioelectronic jamming of satellite navigation, onboard radars and communication systems of fighter aircraft attacking facilities on the territory of Syria and adjacent areas over the Mediterranean Sea.

“We are sure that these measures will calm down the hotheads and keep them from reckless actions that jeopardize our servicemen. Otherwise, we will be forced to react according to the context,” the minister said.

“According to our military experts, this tragedy was caused by deliberate actions of Israeli pilots; because of that, the deterioration in our relationship is inevitable. Moreover, the Russian side is now forced to take auxiliary effective measures to ensure the safety of our service members in Syria,” Peskov told reporters.

Russian Deputy Foreign Minister Mikhail Bogdanov expressed hope that the S-300 deployment will not affect the Russian-Israeli relationship as a whole.

The question now is how Israel will respond, particularly taking into account the political situation inside the country and that the Knesset election campaign is looming close. The opposition will be eager to remind Prime Minister Benjamin Netanyahu about his close contacts with Putin, particularly since the S-300s now will be coming to Syria.

Initially, the Israelis had tried to avoid a breakup with Moscow at any cost, thus constantly demonstrating their willingness to negotiate and cooperate. Three days after the tragedy over Latakia, Maj. Gen. Norkin arrived in the Russian capital with a 40-page report describing the attack, its causes and consequences. The delegation returned home convinced that the discussion had been professional enough and that Moscow had accepted the arguments. The reality, however, was different.

The newspaper Komsomolskaya Pravda cited a Russian expert who took part in the meeting as saying, “Norkin and his colleagues seemed to avoid specific military-technical questions about the Il-20 at the peak moments of the talks, emphasizing totally different points, such as Iran’s efforts to strengthen its military influence in Syria and hand the weapons over to Hezbollah.”

Judging by his words, Russian military officers considered the statements of Israelis “obscure” and the constant blaming of Syrians, Iran and Hezbollah for the incident “annoying.” The Russians wanted Israel to acknowledge its responsibility, but that did not happen. Because of that, the meeting left a bitter aftertaste.

Russia has been overlooking Israel’s assaults on Syria for quite a while. The Israeli ambassador has been summoned only several times to Russia’s Foreign Ministry to discuss this question, even though Israel has made more than 200 attacks in the last 18 months. If at first Moscow criticized the assaults, at least formally, recently it has basically ignored them. This assured Israeli officials that Russia silently supported their stance on the Iranian presence in Syria, even if the Kremlin did not bash Tehran in public. The number of strikes against the targets in Syria had increased dramatically; Israelis were convinced that they were allowed to do everything. They continued to believe in that even after the briefing in the Russian Defense Ministry, holding on to their mantra of successful coordination with Russia and expressing their hope that the cooperation would continue.

Israel failed to realize that Moscow could not let the death of its citizens slip and lose face in a region where little is seen as effective save a position of strength. Meanwhile, Moscow actually took advantage of the situation. While it previously avoided any confrontation with Israel, now Russia has a reason to fulfill promises it made to Syria and show Israelis that these events are their fault. However, providing the S-300 system does not mean using it. Israel and Russia stand face to face in a war of nerves, and the next move is Israel's. What all this will mean for Russia is yet unclear. It is also uncertain whether Moscow can continue with its previously successful tactics of balancing between various regional actors — who often directly oppose each other — involved in the Syrian conflict.