A Russian plane downed by Syrian missiles responding to an Israeli strike has strained relations between Moscow and Tel Aviv and sent both sides into crisis-management mode. 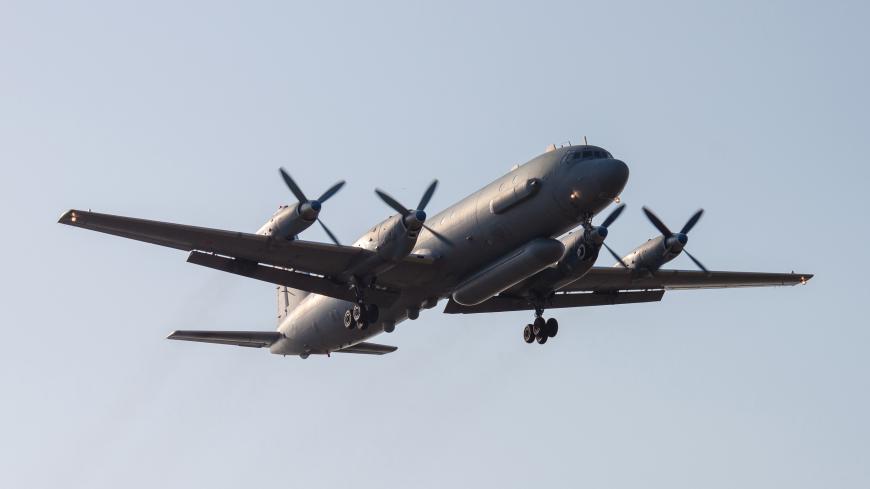 MOSCOW — The downing of the Russian Il-20 transportation jet by Syrian air defense systems over what Moscow described as “Israeli provocation” is probably the single most important crisis Russia has experienced in Syria since the killing of dozens of its mercenaries in Deir ez-Zor at the hands of the US military in February. The downed plane carried 15 people and fell in Latakia province.

The first analogy that popped up immediately after the incident was Turkey's downing of a Russian jet in November, 2015. The similarity looked even more menacing just hours after Russia survived its stress test with Turkey over Idlib.

Russian Defense Ministry was quick to announce that the plane disappeared from radar after “sudden” Israeli strikes on Syria and was eventually hit by Syrian S-200 anti-aircraft systems targeting Israeli jets. Israel was thus named responsible for the incident.

“The guilt for the downed plane lies fully with the Israeli party,” Russian Defense Minister Sergei Shoigu told his Israeli counterpart Avigdor Liberman in a phone conversation following the incident. Shoigu stressed that Moscow had repeatedly warned Israel against strikes on Syria via different channels.

“We consider these provocative actions by Israel to be hostile. The 15 Russian military service members died because of the irresponsible actions of the Israel military. It's absolutely contrary to spirit of Russian-Israeli partnership. We reserve the right to respond appropriately," the Russian Defense Ministry stated.

Russia’s initial complaint was two-fold: Israel violated the bilateral de-escalation agreement that helped prevent incidents in the past by warning Moscow of the attack on Idlib only a minute before first strikes were launched, leaving the Russians unable to withdraw the plane from a dangerous zone. The Israeli move was “unfriendly” as its jets used the Russian plane as cover from Syria’s air defense systems.

“As a result, the Il-20, which has an effective reflective surface an order of magnitude greater than that of the F-16 [which Israel used in the attacks] was hit by an S-200 missile,” commented the Defense Ministry's Igor Konashenkov.

One of Russia’s most authoritative military experts, Mikhail Khodarenok, argued that the French too bear a share of responsibility for the downed plane. He told RIA Novosti, “The French frigate 'Auvergne' contributed negatively to the situation in the skies over Syria by creating complications for Syrian combat units operating anti-aircraft systems. It was in the wrong place at the wrong time.”

Russian airspace control systems registered missile launches from a French frigate in the Mediterranean Sea on Sept. 17 around 8 p.m., prompting Moscow to initially blame Paris for the incident.

The immediate reaction by Russian decision-makers was mixed but strong. Senator Alexey Pushkov, who is on the US sanctions list and chairs the temporary Committee on Information Policies and Engagement at the Russian Council of the Federation, took a cautious stance, saying, “The degree of the intent by the Israeli party must be precisely defined at this point and it will be done via closed channels.”

Backlash from his colleagues in the Senate and the Duma, however, varied from calls for “hard talk” with Israel over the incident to imposing sanctions and breaking diplomatic ties.

Military options presented to the Kremlin by policy-makers and experts in first few hours after the incident included deliveries of more advanced air defense systems to Syrians to guard from future Israeli attacks and “sealing off” the skies over Syria to any foreign power, including Israel, with Russia’s own S-400 missile system.

Few in either circle wondered about Syria's responsibility in the incident. What is under discussion is the Syrian army’s own ability to properly handle the advanced Russia-made anti-aircraft systems as well as whether they knew about the Russian plane before the Israeli attacks or saw it on their radar screens as they opened fire. If so, was there a decision to continue shooting the missiles, aware of potential risks for the Russian crew, or was it just a fatal mistake caused by an “indiscriminate missile launch” — the theory propagated by the Israeli military?

Russian President Vladimir Putin commented, “It’s a different situation,” when asked whether Russia will retaliate against Israel as it did against Turkey in 2015. “Back then, the Turkish jet deliberately targeted our aircraft. Here, rather, it appears to be a chain of tragic situational circumstances because Israeli jets didn’t hit our [plane],” Putin explained at a press conference with Hungary’s President Viktor Orban.

He added, “Our attitude to the tragedy is outlined in the Defense Ministry statement, which was fully coordinated with me. Regarding our retaliation measures, they will be first and foremost aimed at providing additional security to our servicemen, our [military] objects in Syria. And those will be steps that everyone will notice.”

Israeli Prime Minister Benjamin Netanyahu called Putin later that day to express condolences on the death of Russian servicemen and to promise a “thorough investigation” into the incident, the results of which will be brought to Moscow personally by the Israeli air force commander.

According to the Kremlin, Putin “reminded” Netanyahu that “such operations by the Israeli military are conducted in violation of Syrian sovereignty” and that in this particular case, Russian-Israeli agreements on the prevention of dangerous incidents were not observed.

“Mr. Putin called on the Israeli party to prevent such situations from happening in the future,” read the press release.

The Israeli forces went into crisis-management mode, communicating with Moscow about the initial inquiry findings. While some commentators in Russia continue to insist that Israel “is playing a dangerous game,” the general backlash in Moscow and on social media gradually turned toward criticism of the Russian government itself for its failure to prevent the killing of its servicemen. Putin was accused of growing “too cozy with Bibi,” which allegedly emboldened Israel, and blamed for Russia’s inability to act upon the Israeli strikes on Syria as they began. Military experts questioned the effectiveness of communication channels between both the Russian and Syrian militaries and between Russia and the Israelis.

The attack came at a bad time for the Russian president, whose ratings have been shaken by the unpopular pension reform. Pressure is on Putin to manage the crisis with Israel in a swift and convincing manner for his domestic constituency as more start questioning the meaning of the Russian presence in Syria — doubt that sprouts up every time Russia suffers human loses in the campaign.

The incident also came as a wake-up call for Moscow to rethink the security of its personnel that over the course of the Syrian campaign suffered loses from Turkish, American and now Syrian forces, not to mention terrorist and opposition militants. In a broader sense, the tragic incident exposed that no matter how effective the de-confliction channels that Moscow established with major stakeholders operating in Syria, they cannot perfectly prevent potential collisions when there are far too many military actors operating in a relatively small terrain and air space.

“We should have seen it coming,” a Russian diplomat speaking not for attribution told Al-Monitor, adding, “When you have that many forces that close to one another the risk of an accidental mistake is high. You think the war is coming to its end but parties are acting in an even more uncompromised way and we, sadly, may end up seeing more of such incidents.”