Is Assad shifting strategy on Israel? 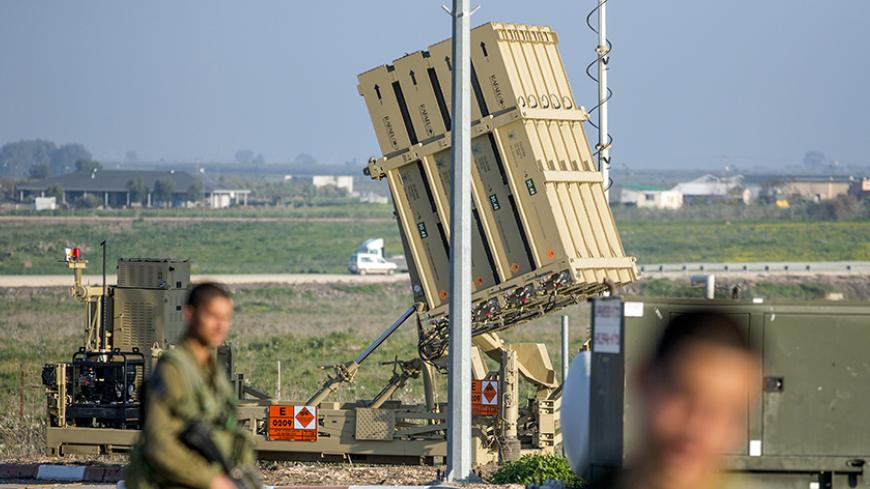 In an unexpected incident, Israel activated its Arrow missile-defense system March 17, targeting a fragment of a Syrian anti-aircraft missile.

This incident forced Israel to publicly admit (a first such admission in a long time) that the targeted Syrian missiles were aimed at Israel Defense Forces (IDF) jets that had previously attacked strategic weapons deep in Syria, weapons that were intended for Hezbollah. Forty-eight hours later, another airstrike took place, hitting a vehicle traveling between Quneitra and Khan Arnabeh in the Syrian Golan Heights. The vehicle was destroyed and its driver, Yasser al-Sayed, was killed on the spot. Sayed was a member of a pro-regime militia and had been close to Syrian President Bashar al-Assad. Evidently, from the Syrian Golan, he had tried to carry out Assad- and Hezbollah-inspired terror attacks against Israel. Israel, for its part, adopted a policy of ambiguity and did not address this incident. But the media are convinced this was Israel’s second airstrike in Syria in two days; that someone in Jerusalem is trying to change the fragile rules of the game that reign on Israel’s northern front. There are those who think that this "someone" is not even trying to avoid a flare-up; perhaps, on the contrary, he is even trying to cause one.

In the first incident, things went from bad to worse, dragging the five sides of the complex power struggle on the northern front (Israel, Syria, Russia, Hezbollah and Iran) to the very edge of their political cliffs. As mentioned, the Syrians launched anti-aircraft missiles against Israeli planes in an unusual move; Israel then brought down one of the missiles via an Arrow missile; then the Russians summoned Israel’s ambassador for a reprimand.

In addition, Israel violated all precedents and bragged about its actions. Defense Minister Avigdor Liberman festively stated that the next time the Syrians launch anti-aircraft missiles against Israeli air force planes, Israel will destroy the other side’s air defense system. Liberman added March 19 that every time Israel discerns attempts to transfer tie-breaking weapons from Syria to Hezbollah, its military will take action to thwart this. Liberman did not address that the Russians rebuked Israel publicly and summoned the Israeli ambassador in Moscow to an urgent clarification talk the night of March 17.

A senior Israeli security source told Al-Monitor that this did not constitute a true crisis between the two countries. Instead, it was a Russian attempt to mollify Russian President Vladimir Putin’s strategic partners: the Syrian regime, Hezbollah and Iran. These partners view the Israeli actions as flagrant violations of the balance of power in the area and an ongoing attempt to harm Syrian sovereignty. “I wouldn’t tell anyone to belittle the Russian reprimand,” said the source, talking on condition of anonymity, “but I also don’t think there’s need for panic. Russia is facing a lot of criticism for continuing to allow Israel to operate in the depths of Syria. They tried to convey an impression by which they are unhappy with Israel.”

The educated guess is that Israeli air force F-16 jets struck a convoy of Scud missiles that are capable of reaching a range of 750 kilometers (466 miles) — and can each carry a warhead weighing half a ton. This kind of weaponry is, evidently, included on the Israeli “blacklist” of arms that it does not allow to be transferred to Hezbollah: long-range surface-to-surface missiles with greater accuracy (such as Scud-D missiles); surface-to-sea missiles, such as the infamous Yakhont supersonic missiles (which endanger the Israeli navy and Israeli gas rigs); modernized anti-aircraft missiles; and chemical weapons.

Allegedly, every time Israeli intelligence gets wind of an attempt to transfer this kind of weaponry from Syria to Lebanon, the air force is activated. However, this time, an unexpected mishap took place. Contrary to habit, the Syrians launched several S-200 missiles at the Israeli air force planes. The missiles themselves did not endanger the planes. However, one of the missiles evidently rose up very high. When it began to skydive, the Arrow’s radar system took it for a ballistic missile coming from afar. Its system went into action and launched an Arrow rocket that hit a fragment of the Syrian missile and intercepted it at a great height.

This was, on the one hand, a showcase for a uniquely successful operational activation of the Israeli Arrow missile. On the other hand, the incident exposed the Israeli strike and prevented Israel from maintaining its usual tight-lipped policy of ambiguity. It also forced the Russians to take action and summon the Israeli ambassador. But in general, what the incident laid bare is the extent to which the northern front can still be explosive. One isolated incident can instigate a chain reaction of responses and activities that create a domino effect, causing a regional flare-up.

“Assad’s self-confidence is on the rise,” an Israeli military source told Al-Monitor on condition of anonymity. “He is no longer fighting for his life, his regime is more stable. Now it’s clear that he’s here to stay. Under this state of affairs, he wants to change the rules of the game, rules created in recent years. Assad wants to close the window, which, in his view, allows Israel to continue to strike Syrian territory. That is evidently the reason for his launching of the anti-aircraft missiles.” It is important to note that this is not the first time the Syrians have launched anti-aircraft missiles against the IDF. What sets aside this incident from previous ones is that the Russians also intervened.

To complicate things even further, the second abovementioned incident took place March 19: A vehicle in the Syrian Golan was attacked, and a militia member closely associated with Assad was killed. This was not a strategic killing. The assessment is that although the militant was suspected of carrying out terror attacks against Israel on the Golan front, he was not viewed as someone trying to create strategic threats against Israel in the style of Hezbollah militants Jihad Mughniyeh or Samir Kuntar, both of whom were target-killed in the Golan in 2015.

The juxtaposition of this killing with the aerial strike in the depths of Syria might be a sign that Israel has become less careful and cautious than usual. Perhaps Israel is now taking more risks in its dangerous dance with the other parties involved in Lebanon. Israel took no responsibility for Sayed’s elimination. However, on that same day, a change of authority took place in Israel’s Northern Command, and some of the top brass who attended referred to the incident obliquely. Chief of Staff Gadi Eizenkot and outgoing Deputy Chief of Staff Aviv Kochavi both said that Israel would continue to thwart terror cells and prevent the transfer of strategic weapons to Hezbollah.

The real question is: What causes Israel to act so freely, and what encouraged its leaders to brag in public following the March 17 incident? One possible answer may be the coalition crisis that is threatening to dismantle the Benjamin Netanyahu government. Another factor may be the ongoing investigations against the prime minister. A flare-up in the north could serve to overshadow these events and put them in the correct perspective. Liberman, who loves his job as defense minister and thus wants to lengthen the current government’s life expectancy, is playing a dangerous game here. The nerves of all the players in the complex tug of war on the northern border are already frayed. Any escalation could get out of control very quickly and lead to a true inferno.

Perhaps that is why Eizenkot announced March 19 that “in a future war, there will be a clear address: the state of Lebanon.” Such an announcement completely dovetails with my last article in Al-Monitor, and constitutes a clear warning: Hezbollah and Lebanon are no longer two separate entities. From now on, they are one and the same.