The Strategic Bargain Of Israel-Hezbollah Deterrence

Israel’s strike against the Syrian convoy on Jan. 30 was not to escalate the conflict with Damascus, but to contain it, while maintaining deterrence between Israeli forces and Hezbollah, writes Jean-Loup Samaan. 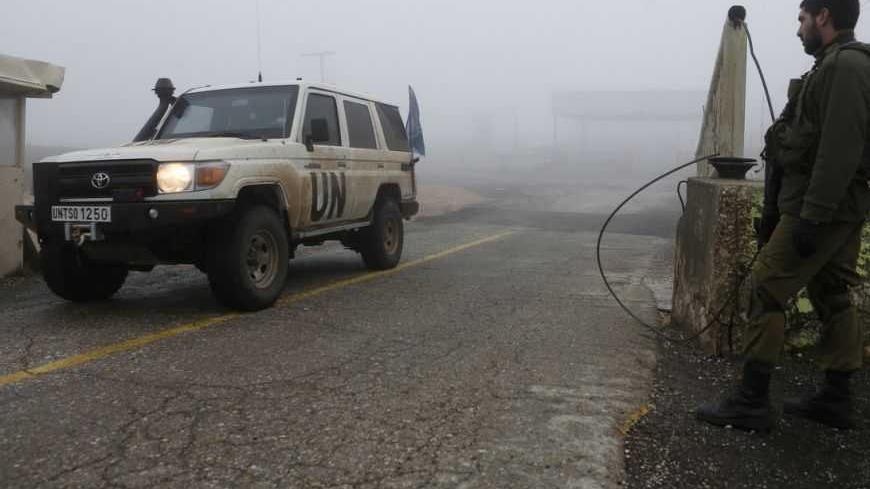 An Israeli soldier looks on as a United Nations jeep drives past the Quneitra border crossing between Israel and Syria, in the Golan Heights, Jan. 31, 2013. - REUTERS/Baz Ratner

The Jan. 30 Israeli airstrike in Syria, which allegedly targeted a convoy of weapons to be transferred to Hezbollah, refreshed the prospects of a regionalization of the Syrian battlefield, and in particular of a new clash between the Israeli military and the Party of God. Yet, following the operation, all parties showed cautious restraint. In fact, as counterintuitive it may seem, the Israeli strike may have attempted — and so far succeeded — to contain the crisis to the Syrian territory rather than to regionalize it. In other words, it can be read as a means to disconnect the Syrian front from the Lebanese one. To understand this logic, we need to get back to the strategic bargain that has been prevailing between Israel and Hezbollah since 2006.

For seven years now, the border between Israel and Lebanon has witnessed stability. At first sight, this has all the appearances of a paradox. The 2006 war was followed neither by a peace agreement nor a mere diplomatic initiative. Since then, the two sides did not disarm but prepared their forces to conduct the next war. Additionally, their regional environment has never been so unstable. Iran, the closest ally of Hezbollah, is under severe pressure: The regime endures a set of international economic sanctions crippling its economy, rumors of an Israeli attack on its nuclear plants are still in the air and the Gulf monarchies are openly aiming at Tehran’s spheres of influence in the Middle East and the Arabian Peninsula. Furthermore, in Syria, the battle has turned into an all-out war for Bashar al-Assad’s survival. As a result, Iran and Hezbollah are gradually supporting Assad’s militias like the infamous Shabihas and Jaish al Chaab. Finally, the Israeli operation against Hamas last November reminded us that the Gaza Strip could still quickly flare up.

In this landscape, common sense would predict that it would take only a slight miscalculation to see Israel and Hezbollah entering a new conflict, the same way they did in 2006. This did not happen, though.

Against all odds, Israeli and UN forces reported the area comprising north Israel and south Lebanon to be very calm these last months. A key to understand this paradox is the game of deterrence between Israel and Hezbollah. The fact that for the last seven years both parties prepared themselves to inflict a heavy, if not a fatal, blow to the other is the very reason why no new war has so far erupted.

Since 2006, the Israeli military has been trained to conduct a quick, full-scale operation to decapitate the Lebanese movement by targeting its infrastructure in the south and its nerve centers in the suburbs of Beirut. Along these lines, there have been speculations on a so-called “Dahya strategy.” Dahya (Arabic for “suburbs”) designates the Shia neighborhoods in south Beirut, where Hezbollah’s headquarters are located and which suffered massive air strikes by the Israeli air force during the 2006 war. Speculations on this “Dahya strategy” derive largely from a 2008 interview with Gen. Gadi Eizenkot, who declared that if a new war with Hezbollah was to erupt, “what happened in the Dahya quarter in Beirut in 2006 will happen in every village from which Israel is fired on. We will apply disproportionate force on it and cause great damage and destruction there.” This statement surely aimed at conveying the new resolve of Israel vis-à-vis Hezbollah. Although there has been no official endorsement of a “Dahya strategy,” the fact that Eizenkot has recently been appointed Deputy Chief of Staff is a clear indication that these comments reflect a dominant view within the IDF.

On the other side, Hezbollah’s own military posture has also substantially shifted in the last decade from a strategy that focused on suicide attacks against IDF’s convoys to one centered on rockets and missiles targeting forces and cities in northern Israel. Estimates on this arsenal vary widely from 40,000 to 80,000 rockets and it is also believed that Hezbollah acquired 4,000 short- to mid-range missiles through Syria. In particular, there have been repeated allegations in the last years of Syria transferring Scud-D ballistic missiles (able to strike up to 700 km [about 435 miles]).

But how did Hezbollah exactly react to the Israeli “Dahya strategy”? By using the very same language. In numerous occasions, Hassan Nasrallah detailed his vision of the Party’s arsenal as a deterrent. One of the best-selling DVDs of Nasrallah’s speech these days in Lebanon is the so-called Khitaab al radaa’ (Speech of the deterrence).  In this one-hour speech, Nasrallah talks directly to the IDF saying, “If you destroy a Dahya building, we will destroy buildings in Tel Aviv! If you target Beirut’s Rafik Hariri International Airport, we will strike Tel Aviv’s Ben Gurion International Airport!”

Accordingly, because both sides understood that a next round would be devastating and that, in the case of Israel, the threat of Hezbollah’s missiles cannot be wholly eliminated, the solution has been to bargain deterrence, meaning to deter the other party from attacking its homeland by pledging a full-scale retaliation. But to say that stability has been preserved between Israel and Hezbollah thanks to deterrence does not mean that this is a perennial state. Deterrence works through the combination of factors that can easily be altered. So far the Iranian nuclear issue has not influenced the Israel-Hezbollah competition but the Syrian crisis is directly challenging the bargain, with the issue of Syrian weaponry.

A Hezbollah armed with Syrian chemical weapons or mid-range ballistic missiles raises the level of vulnerability of Israel’s territory and eventually defies the status quo. This is why Israel’s strike against the Syrian convoy was not aiming at escalating the conflict with Damascus but at disconnecting it from the Lebanese front. It aimed at maintaining a deterrence system between Israeli forces and Hezbollah that is effective as long as it remains isolated from other theaters in the Middle East.

However, the more Hezbollah gets bogged down in Syria, the more the disconnection between the two fronts will be difficult to sustain.