Despite the Israeli consensus on missile defense, the core of Israeli strategy remains an offensive deterrent posture, writes Jean-Loup Samaan. 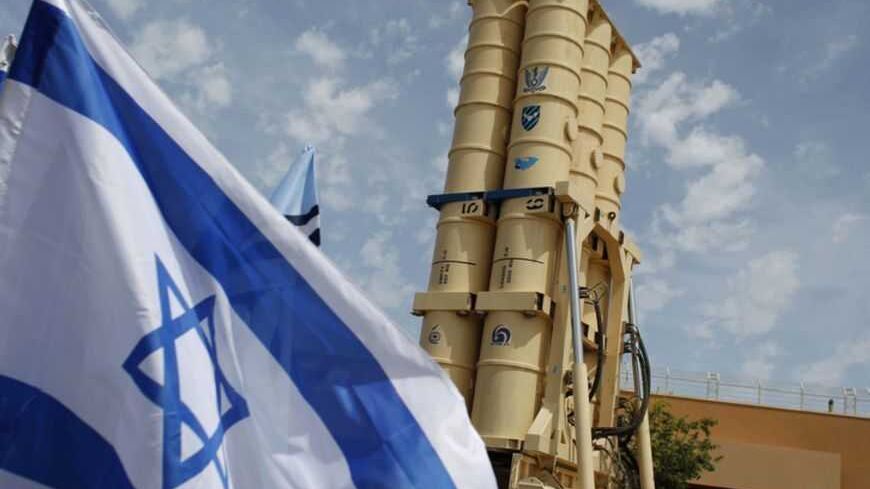 An Arrow II missile interceptor displayed at an Israeli air defense command in the Palmahim military base south of Tel Aviv, May 12, 2011. - REUTERS/ Nir Elias

On Feb. 25, the Israeli Defense Ministry announced a successful test of its upgraded Arrow interceptor system conceived to target long range ballistic missiles, in all likelihood from Iran. According to its proponents, the Arrow system had already proved a success in up to 90% of previous tests. The February test is the latest illustration of Israel’s new passion for missile defense, a topic that may have become one of the few topics left to bring consensus in Israeli politics.

The story of Israel’s missile defense enterprise dates back to the early eighties when the US administration of Ronald Reagan was looking for allies interested to cooperate on its ambitious Strategic Defense Initiative. In 1983, the Israeli government expressed its initial interest and three years later was signed a Memorandum of Understanding that led to the co-financing of the Arrow system. But contrary to the Reagan dream to build missile defense to render nuclear weapons obsolete, the Israeli calculus was driven by a mix of opportunism and pragmatism: all along the government faced tremendous scepticism from its military establishment that saw missile defense as strategically misleading.

Since the birth of Israel, its armed forces have relied on offensive doctrines rather than defensive ones. Starting in the late '40s, Israel’s strategic culture has been shaped by constraints such as the absence of strategic depth and scarce manpower that left the country at the mercy of protracted conflicts that would put the existence of the state at stake. To bypass these elements, Israeli leaders opted for offensive doctrines enabling the launching of pre-emptive campaigns that would swiftly move the battles to the territory of the enemies. Even though the reality of an existential threat coming from Arab conventional armies vanished after the 1967 war, this scenario still remained a key driver of Israeli military planning process in the mid-eighties. This explains the initial scepticism toward a weapon system presumed to rebalance resources from offensive to defensive means.

The first wake-up call happened in 1988 with the so-called ‘war of the cities’ between Iran and Iraq, when Israeli analysts realised that Saddam Hussein was using Scud missiles striking Tehran as new means of compellence (i.e., encouragement through application of punishment]. The Iraqi missile threat got even more concrete to the Israelis three years later when, in the midst of the second Gulf War, Saddam Hussein launched 42 Scud missiles on Tel Aviv, Haifa and Dimona. Although the damages inflicted were relatively low, the psychological effect revealed a urgent need for reassessing the Israeli offensive-defensive equilibrium.

In the following years, missile proliferation in the Middle East grew in earnest, with Syria and Iran developing the most advanced arsenals. But again, despite the fact that these trends supported the claims of the advocates of missile defense in Israel, scepticism still prevailed within the armed forces. Eventually, the second wake-up call came during the 2006 war with Hezbollah. During this 33 day confrontation, Israeli Air Force conducted one of the most intensive air campaign in modern history. Nevertheless at the end of the war, Hezbollah was still able to launch rockets on cities like Haifa, Afula and Tiberias. Not only did the Israeli military fail to destroy the launchers but the political impact of Hezbollah’s strikes on Northern Israel reinforced the conviction within the Lebanese movement that missile warfare was the only way to circumvent Israel’s overwhelming force.

As a result, Iron Dome was officially started in February 2007. Contrary to the Arrow system that focused on mid-to long range missiles, Iron Dome aims at intercepting rudimentary rockets with a 4 to 70 km range. The first batteries were deployed in October 2011 in the cities of Ashdod, Beersheba and Ashkelon, to cover the threat coming from Gaza.

The ultimate confirmation of Israel’s new passion for missile defense was given during the last Operation Pillar of Defense in November 2012 during which Iron Dome achieved a success rate of 85%. Of the 1506 rockets fired at Israel, only 58 rockets fell in urban areas. As Yiftah Shapir from Tel Aviv’s Institute for National Security Studies coined it, Iron Dome was “the queen of battle” during the operation Pillar of Defense. These impressive results led to political euphoria but the other consequence was the rise of several strategic misunderstandings.

The first misunderstanding relates to the exact coverage of Israel’s missile defense. Although Israeli politicians ambiguously imply that the systems aim at defending the homeland as a whole, in reality the existing systems protect first and foremost critical infrastructures and military bases. As Gen. Gadi Eizenkot, the current deputy chief of staff stated in 2010, “the residents of Israel shouldn't be under the illusion that someone will open an umbrella over their heads."

The second misunderstanding can be seen in the way US and European audiences have misread the success story of Iron Dome and portray it as the perfect supporting evidence for NATO’s own missile defense enterprise. This rhetoric is fallacious for two reasons: first, because the successes recorded by Iron Dome do not cover threats relevant to NATO countries. By no means shall Israel’s ability to intercept rockets coming from Gaza support NATO’s enterprise that aims at deploying capabilities to destroy ballistic missiles. Secondly, the Iron Dome success does not equal a real rebalancing between offensive and defensive tenets for the Israeli Military.

This may be the most important lesson to date: in reality, despite all the political hype about missile defense, the Israeli military establishment still relies on an offensive posture. The recent reformation of Israel’s Depth Corps, a special unit to coordinate and conduct clandestine operations in enemy territory to destroy launcher sites of missiles and rockets reflects the very willingness of the IDF to retain the option of pre-emptive operations. When one looks at the figures, this is also evidenced by the current force structure in Israel. Therefore, the passion may be more about politics than strategy and it remains to be seen if in the future, this could really impact on the traditional offensive inclination of the Israeli military, a phenomenon that would likely create major political-military tensions.