US Arms Sales All About Iran

The novelty of the latest US arms sales to Israel, Saudi Arabia and the United Arab Emirates was not their scale or content, but the sign of a US realignment of allies to deter Iran, explains Jean-Loup Samaan. 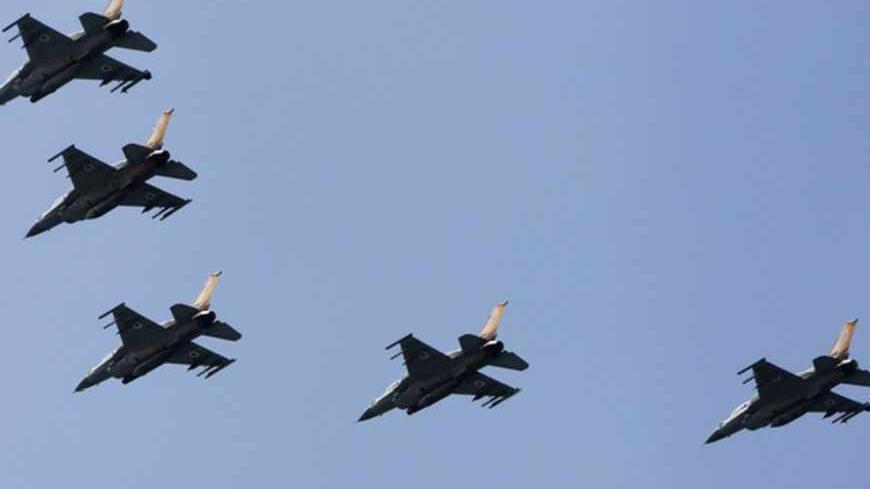 Israeli Air Force F-16 war planes fly in formation over the Mediterranean Sea as part of celebrations for Israel's Independence Day, marking the 65th anniversary of the creation of the state, April 16, 2013. - REUTERS/Amir Cohen

The latest US arms sales to Israel, Saudi Arabia and the United Arab Emirates — together reaching approximately $10 billion — have been depicted by some media outlets as a turning point in Washington's export policy toward the Middle East. However, a careful look at their packages reveals that they represent not so much a shift in US policy in the region as the culmination of past decisions.

In the case of Israel, the sales are only one piece of the puzzle in the reinforcement of bilateral defense cooperation. During his April trip to Jerusalem, US Secretary of State Chuck Hagel also confirmed a rise from $2.4 billion to $3.1 billion in foreign military financing to Israel. Historically, this level of US military funding is unmatched. Likewise, he promised that for the next fiscal year, the US would allocate $220 million to Israeli missile-defense systems (complementing the extant $460 million). In other words, the latest purchase only confirms the steady strengthening of Israel-American military relations.

In the Gulf, too, these sales can be considered the prolongation of the US' previous arms-export choices with the GCC kingdoms. In particular, the acquisition of F-16 fighter jets by the UAE (equaling $5 billion) follows the previous sale in 2011 of 84 F-15 jets by Saudi Arabia (a record $29.4 billion deal). At the military level, these sales give Saudi Arabia and the UAE a qualitative edge in air power relative to Iran, but in some ways, it only reinforces their pre-existing air superiority. This gap had been already underlined in 2009 by David Petraeus, then chief of US Central Command, when he declared that the UAE air force could take on its Iranian counterpart by itself, without the need for allies.

In fact, the real novelty with these sales was neither their scale nor their content, but the political message the Pentagon sent through them. When looking at the newspapers covering Hagel’s trip to Jerusalem, Abu Dhabi and Riyadh, it seemed almost as if the sales had been negotiated through a common framework, a kind of comprehensive arms-export policy by Washington toward the region. This was no misunderstanding, as Pentagon officials repeatedly briefed the press to convey this narrative, emphasizing that "this trip is underscoring the US security relationship with Israel and also our other Gulf partners." Even the much-discussed price, $10 billion, mentioned by the Pentagon, aggregates contracts in an arbitrary way. Wording and figures matter here; they put aside the very fact that these contracts were discussed through separate bilateral tracks with Israel, the UAE and Saudi Arabia.

In fact, this public-relations strategy is more than communication. It reveals the Pentagon’s ambition to regionalize its export policy. The Defense Department used the deals to give texture to a Middle East strategy which has been emerging since the withdrawal of US armed forces from Iraq in December 2011. This regional strategy is built upon two very explicit objectives: to compel Iran to abandon its nuclear ambitions and to reassure regional allies on US resolve in the midst of the pivot to Asia. The bold move here is to shape an alliance of convenience with Gulf countries and Israel. This rationale is driven by the fact that all these US partners share a common concern, namely Iran, either because of its nuclear program or of its backing of President Bashar al-Assad’s regime in Syria. Against this backdrop, the importance of the latest arms sales has less to do with operational requirements than with declaratory policy.

This strategy also aims to maintain American leverage in the region. It allows Washington to play the role of "offshore balancer" in the area. This means opting for indirect policies rather than for direct intervention in regional competitions in order, ultimately, to master the local power struggles. In some ways it relates to the concept of "leading from behin" that illustrated the US decision not to lead the intervention against Gadhafi’s Libya but to provide its NATO allies with critical military support to do so.

However, the strategy may face important difficulties. In the case of Iran, the effectiveness of Washington’s message is doubtful. Tehran publicly condemned what it depicted as an arms race started by Washington and is steadily pursuing the process of uranium enrichment. Ex-Israeli military intelligence head Amos Yadlin stated last April that "the Iranians have crossed the red line set by Netanyahu," and they did so despite all the demonstrations of force conducted by the US in its vicinity.

In the meantime, the arms sales may temporarily address the angst of US partners in the region, but not definitely. Militarily speaking, each of the three countries initially asked for more than they received. Israel requested the Massive Ordnance Penetrator, a weapon system designed to bomb underground sites and which could decisively enhance Israel’s ability to target the Iranian nuclear-enrichment center at Fordo, if Jerusalem were to decide to conduct pre-emptive strikes. The White House may have feared that such deal would have been a step too far in the game of intimidation with Iran.

Similarly, Riyadh and Abu Dhabi were allegedly asking for AGM-158 Joint Air-to-Surface Standoff Missiles. The Obama administration also refrained from transferring these arms, although it opened the door to the sale of the less sophisticated AGM-88 missiles. In fact, this decision may be less driven by the question of Iran than of Israel: US measures of reassurance to GCC countries still depend on the guarantee that they do not challenge Israel’s qualitative military edge, a historical pillar of US export policies to the Middle East. This is a major caveat, as the new regional strategy confronts national-security traditions.

But eventually, the biggest challenge to this US strategy will be the question of leadership, or to use John Mearsheimer’s academic terms, "the credibility of the commitment." The concepts of "leading from behind" or "offshore balancer" driving the thinking inside the Obama administration are understood, in Israel and the Gulf, as a convenient way to hide irresolution. The fungibility of arms sales as an instrument of power is not perfect. Arms sales are necessary, but no sufficient means to support this regional strategy. In light of the prolonged Syrian crisis and the unsolved Iranian nuclear issue, the ultimate question is how far indirect US actions (arms sales, diplomatic engagements) can fill the gap, with its military power left in the wings.

Jean-Loup Samaan is a researcher in the Middle East department of the NATO Defense College. His current research projects include the Israel-Hezbollah standoff since the 2006 war, the Syrian civil war and its impact on the region and the evolution of the regional security system in the Gulf. On Twitter: @jlsamaan