US Locked Into the Middle East

While events will not allow the United States to pivot from the Middle East to Asia, the US still needs a coherent strategy for the region, writes Jean-Loup Samaan. 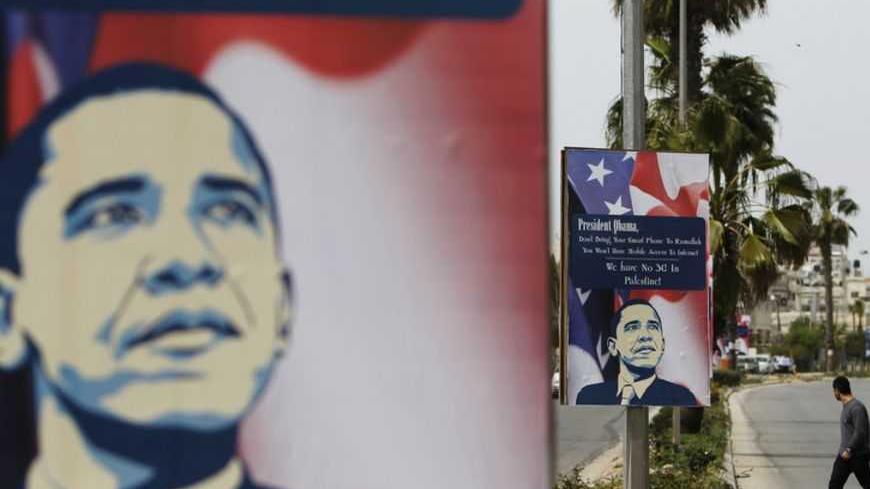 A Palestinian man walks near placards designed by an activist depicting US President Barack Obama, ahead of his visit to the region, in the West Bank city of Ramallah, March 12, 2013. - REUTERS/Ammar Awad

For the last two years, the narrative prevailing in the strategic community was that due to the security and economic priorities in the Asia-Pacific region, the US government would rebalance its military and diplomatic means to that region. After a decade of long wars and an unending financial crisis, the US has no choice but to scale down its global engagements.

Meanwhile, with the rise of China as an assertive military power in Asia, the priority appears to be a reaffirmation of US commitment to its allies such as Japan, Australia, and South Korea. That was the so-called “pivot” that had been acknowledged in several instances by former Cabinet members Hillary Clinton and Robert Gates and eventually officialized in the 2012 Defense Planning Guidance.

However this story of a grand strategy does not exactly match the reality. Despite all the talks of a US shift to Asia, the efforts of the Obama administration have lately been dedicated to Middle Eastern crises. The diplomatic agenda of the last months is revealing: last November, in her last days of Secretary of State, Hillary Clinton had to postpone a scheduled visit to Asia to go to Israel to seek truce after the Israeli operation “Pillars of Defense” in retaliation to rocket strikes by Palestinian factions in the Gaza Strip. The first key decision of her successor, John Kerry, was not directed at the Pacific theater but was a pledge for US commitment to provide non-lethal aid to the Syrian opposition amounting to $60 million. Additionally, Chuck Hagel, freshly nominated as Secretary of Defense after a long controversy in Congress regarding past positions on US-Israel, met last week, his first foreign counterpart: Ehud Barak, Defense Minister of Israel. In fact, during his hearing at the Senate, Hagel evoked Israel 136 times in the hearing and Iran 135 times. Conversely, China was barely mentioned.

These are more than anecdotes as they reflect a bigger picture of US role in the Middle East. Contrary to the popular belief, the US has not left the Middle East following the withdrawal of its armed forces from Iraq in December 2011. In reality, the level of American commitment to the region is not lowering down but quite significantly increasing.

During his meeting with Barak, Hagel emphasized the continued US financial support to the Israeli military and confirmed in particular an increase in the US funding for Israel’s Iron Dome that had been promised by his predecessor, Leon Panetta. Similarly, the deployment of US Patriot missiles in Turkey last December, added to the US radar stationed on Turkish soil since late 2011, is a significant reinforcement of American defensive means against ballistic threats in the region. Furthermore, the Kerry announcement of the provision of non-lethal aid to the Syrian rebels was followed by media revelations on the training of the rebels by CIA operatives.

This quiet but steady reshuffle of US footprint in the region is also evident in the Persian Gulf. Following Ayatollah Khamenei’s threat to close the Strait of Hormuz in January 2012, the US Navy doubled the number of vessels patrolling the waters. During the same period, the US Army’s 1st Cavalry Division’s 1st Brigade leaving Iraq was ordered, not to go back to the US, but to shift to Kuwait. Comprising about 4,500 soldiers plus tanks and artillery, the brigade will play the role of “mobile response force” for the region. Overall the US still maintains in the Gulf region nearly 50,000 soldiers. Moreover it plays a critical role in the shaping of the Gulf Cooperation Council’s defensive architecture. GCC kingdoms are increasingly relying on US weapons systems (through confirmed and planned purchases of Patriot batteries) and the command structures of US Central Command. Finally, the launching last year of a first US-GCC strategic dialogue aims at uniting all these efforts.

But even though all these elements indicate a strong US commitment to the Middle East stability, criticisms addressed to the Obama administration on its Middle East policies are numerous. Despite multiple signs of reassurance, there is a growing perception that either US-Israel relations or US-Gulf relations are at a historical low level. In fact, we can argue that the biggest reason to understand this paradox is the enduring absence of a Middle East strategy for the Obama administration.

Ironically, the US is stuck in the Middle East where it struggles to define a regional strategy while it aims at pivoting to Asia where it has one. In the Pacific, US policies aim more or less at implementing a posture of “strategic hedging” (to use Evan Medeiros’ expression) vis-à-vis China. This approach has obviously its shortcomings but at least it gives a sense of wide-ranging purpose to US engagement in Asia. There is no such thing at the moment for the US in the Middle East.

Back in the mid-nineties, the Clinton administration had adopted a coherent regional approach which designated the Israel-Palestine conflict as the motherhood of Middle Eastern crises and therefore the primary objective for the region was to solve it. This was then replaced by the Bush freedom agenda which presumed, according to the neoconservative philosophy, that regime change would bring an end to authoritarianism and pave the way for peace and prosperity.

For the Obama administration, it seemed at first that the Iranian nuclear conundrum would be the defining issue for its Middle East policy, as it was stated by several of his close advisers back in 2008-09. In the meantime, the “New Beginning” speech by Obama in Cairo in June 2009 was meant to start a new era in the US relation with the Muslim World. However, the Arab revolutions two years later left the White House puzzled and since then, there has not been any substantial effort to design a new meaningful US strategy for the region. As the result, the case-by-case approach implemented by Obama, in the legitimate name of pragmatism, has fueled criticisms of inconsistency and double-standard. Today, lots of people in the Arab World derail the Obama that tells Egyptian President Mubarak to step down while remaining cautious regarding the protests in the kingdom of Bahrain. There is also incomprehension on the fact that the US enforced the UN principle of Responsibility to Protect in Libya quite rapidly while it refrained from providing critical support to the Syrian rebels after two years of civil war there.

Not all these critics are grounded in facts — and they sometimes contradict themselves — but they reflect the huge demands for a much more aspiring US leadership in the Middle East. The announced travel to Obama to the Middle East in the last days of March, the first destination of his second mandate, will be surely dissected through these lenses. But as of today, in a period of strategic fatigue, despite the understanding that the US will not easily leave the Middle East, there does not seem to be big appetite for a new US grand strategy for the region.