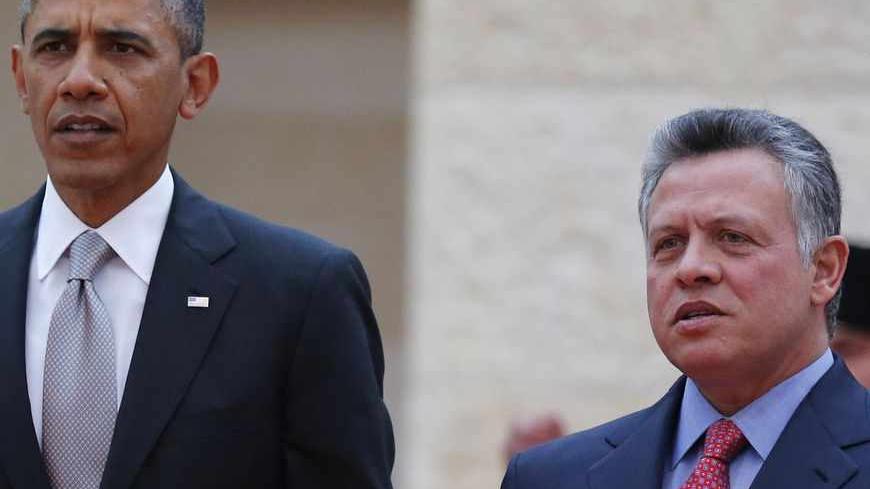 The Atlantic magazine's March article by journalist Jeffrey Goldberg focused on Jordan’s strategic challenges. Based on an extensive interview with King Abdullah II, the article intended to tell the story of a reformist Arab monarch. But intentionally or not, it engendered a huge controversy in Amman. The portrait of Abdullah painted by Goldberg is one of a king despising the Jordanian tribal leaders, calling them "the old dinosaurs." The king described the Muslim Brotherhood as "a Masonic cult," adding that "there’s no depth to [Egyptian President Mohammed Morsi]."

Goldberg’s story was followed by an official statement of the Royal Palace claiming that the journalist had misinterpreted the king’s comments, although it did not contest the accuracy of the quotes. In the midst of the Syrian war, this public controversy brought to mind the brewing concerns in the West about Jordan’s destiny after the Arab Spring. Specifically, there are increasing worries in the US and Israel on the risks that the collapse of the Hashemite kingdom would constitute for Middle East stability.

Historically, the question of Jordan’s fragility is not a new phenomenon that suddenly emerged with the Arab Spring; it has always been inherent to the crafting of its state. Because of its small size, its shared borders with regional powers such as Israel, Syria, Iraq, Saudi Arabia and its massive dependence on external natural resources, Jordan’s fate depends on the stability of its neighborhood.

To be fair, King Abdullah II has been very active on the first front, the foreign policy domain. He leveraged wisely the legacy of his father King Hussein to maintain Jordan as a key player in the Middle East power plays. The kingdom is the only Arab country that has been able to maintain good relations with Israel as well as the monarchies of the Gulf Cooperation Council or even with Palestinian Hamas. Meanwhile, the United States remains a major partner: in 2010, receiving $818 million, Jordan was the largest per capita recipient of American aid after Israel. In addition, Jordan also remains one of the most active partners at the political and military levels for NATO's Mediterranean operation. Jordanian Armed Forces participate in various NATO initiatives, and they sent six fighter jets to the Mediterranean in April 2011 to participate in Operation Odyssey Dawn for enforcement of the no-fly zone over Libya.

But despite this Jordanian activism, the regional environment is degrading. Back in 2004, King Abdullah II declared that the new Shia-led Iraq, combined with Iranian partners and the Lebanese Hezbollah, would create a “Shia crescent that will be very destabilizing for the Gulf countries and for the whole region”. Noticeably, in his recent Atlantic interview, the king added a competing “Muslim Brotherhood crescent.” The best illustration of Jordanian fears of these two "crescents" is Syria where Amman worries both about Iranian meddling in the country’s fights and about the rise of jihadist movements such as Jabhat al-Nusra. Jordanian policymakers are today apprehensive about Tehran’s increasing footprint in Syria the same way they have been in Iraq for almost a decade.

Meanwhile, there is increasing concern that Salafi jihadists fighting in Syria would turn to Jordan afterward. The distress in Amman is to see the Deraa province, along the southern Syrian border with Jordan, turning into a hub for extremists in the same way as the northern region surrounding Aleppo.

These two kinds of sectarian radicalization are perceived as critical challenges for the Jordanian monarchy and this explains the proactive position of the country vis-à-vis the Syrian developments. Because Jordan can obviously not afford a long Syrian crisis at its doors, it has been rapidly explicit in its support for a post-Assad Syria. King Abdallah II was the first Arab leader to call Assad to step aside in November 2011. Additionally recent reports have revealed that since 2012 Jordan had enabled access to US, French and British military instructors to train Syrian rebels to prevent the collapse of the State in the post-Assad period, and furthermore to counterbalance radical elements of the opposition.

But Jordanian challenges cannot be simply divided into external and internal issues as the latter are fuelled by the former. With Palestinian, Iraqi and now Syrian refugees representing de facto a majority of its inhabitants altogether, Jordan is under humanitarian demands that exacerbate social and economic challenges. Although under the leadership of King Abdullah II, the country has drastically improved its business practices, and enhanced its educational standards, the liberalisation of the Jordanian economy has widened the inequalities among social classes. Prices have risen while unemployment has grown (affecting more than 30% of the population). Jordanian higher education has become a regional reference but with tuition fees comparable to European standards, universities in Amman are more and more the preserve of a small wealthy elite.

In retrospect, it is troublesome to read again the king’s audacious promises in the mid-2000s as many of the reforms he claimed back then on the fight against corruption, the reduction of the Intelligence Services’ power or the need to improve the representativeness of the Parliament have yet to be implemented. Furthermore, a fact frequently ignored in the West is how volatile Jordanian politics have been in the last decade: since his accession to the throne 14 years ago, the King has sworn in 12 cabinets, which in the best case has lasted for two years and a half. As a result, the biggest opposition group, the Islamic Action Front, has been more and more vocal in its contest of the kingdom’s policies and even though it is not yet calling for the fall of the regime, it has been boycotting the last elections of March 2013.

Eventually the last lesson of the controversy surrounding the king’s Atlantic comments is a simple one: there is a growing and steady gap between Western views of the astute foreign policy strategies of the Jordanian monarch and the increasing disappointment that the lack of social and economic progress has brought at home. The Middle Eastern crises surely affect the country but its worst enemy may be political inertia vis-à-vis domestic reforms. This is why the fate of the Jordanian rulers will depend on their ability to revisit the social contract of their country.

Jean-Loup Samaan is a researcher in the Middle East Department of the NATO Defense College. His current research projects include the Israel-Hezbollah standoff since the 2006 war, the Syrian civil war and its impact on the region as well as the evolution of regional security systems in the Gulf. Before that position, he was a policy advisor for the French Ministry of Defense and a visiting scholar for the RAND Corp. He holds a Ph.D. in political science from the University of Paris, La Sorbonne.