Jean-Loup Samaan writes that NATO’s role in Syria is likely to remain limited, and that preserving the infrastructure of the country is essential to prevent a collapse of state authority. 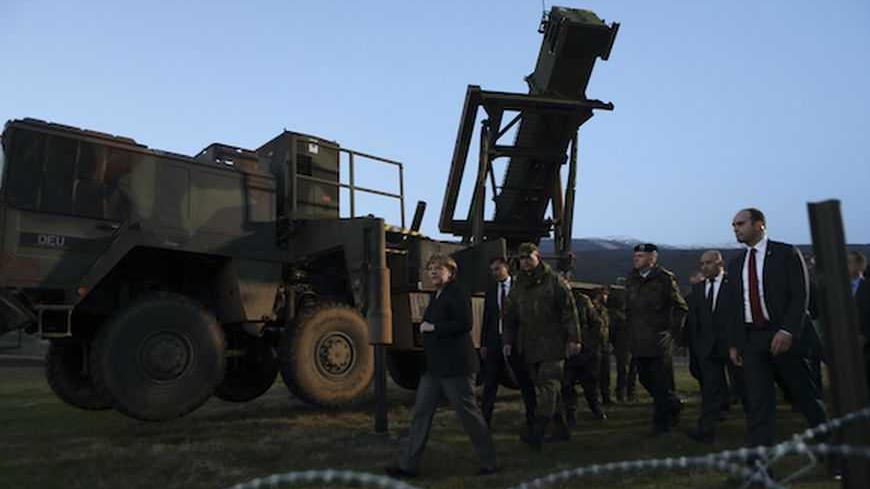 Germany's Chancellor Angela Merkel (L) walks past the Patriot system as she meets with troops from a German NATO Patriot missile battery at a Turkish military base in Kahramanmaras February 24, 2013. - REUTERS/Murad Sezer

German, Dutch and Turkish defense ministers gathered for a joint visit [Feb. 23] to NATO Patriot batteries deployed to Turkey that had been declared fully operational two weeks earlier. Ismet Yilmaz, Turkey’s defense minister, took the occasion to “thank [his] fellow ministers from Germany and the Netherlands for their important contribution.”

This event marked the final step in a NATO build-up that had been scrutinized in the last months by all the stakeholders of the Syrian conflict. It was then followed two days later by the visit of German Chancellor Angela Merkel to Turkey, a trip that included a meeting with NATO German Patriot missile batteries' troops.

Officially Turkey requested the deployment of six Patriot batteries in November following multiple incidents at its borders with Syria, such as the shelling by Syrian forces of Turkish town of Akcakale [Oct. 3] that led to the death of five civilians and retaliation by Turkish artillery. As a result, NATO’s North Atlantic Council hold consultations which resulted in the decision by Germany, Netherlands and the United States to contribute to Turkey’s defense by providing two Patriot batteries each that are under NATO command.

This NATO move was quickly condemned by Russia, which read it as an aggressive measure more likely to engender clashes than bringing peace. Additionally Syrian and Iranian officials portrayed the deployment as a tangible evidence of NATO’s hegemonic agenda on the Middle East. Bashar al-Assad repeated this narrative during his last interview with German television.

Meanwhile, the leadership in Tehran argues that the Patriots in Turkey are targeting their regime, adding that their real mission is to guard the radar system in Kurecik against a possible attack from Iran.

To counter this narrative, NATO has invested a significant amount of effort to emphasize that these systems were means of defense and deterrence. Asked by Middle Eastern audiences, NATO officials deliver the same message: “This is not an operation, this is not a mission, this is simply a deployment.” They also underline that the raison d’être of this deployment is Turkey’s security in the context of the alliance’s commitment to the defense of its members. Furthermore, they stress that this build-up should not be read as an initial step toward the implementation of a no-fly-zone. During his visit to Turkey, German Defense Minister Thomas de Maizière reiterated: “The position and range of the Patriots makes it impossible to enforce a no-fly-zone or attack Syria.”

These Patriot batteries may prove to play the exact role they were designed for: to act as a stabilizer at Turkey’s borders with Syria and as a means to contain the Syrian war from NATO’s territories. They impose explicit red lines that seem to be well understood by Bashar al-Assad, de-escalating the brewing conflict between Turkey and Syria. However, the current and future military developments in Syria might challenge the NATO calculus.

It's now clear that Syria is not undergoing a violent transition from one regime to another. In fact, the country is enduring a process of disintegration of its state structures. Planners for a post-Assad Syria are no longer eyeing the potential successors of Assad but at the bewildering landscape of non-state actors that fight each other over the conquest of what will be eventually left of the Syrian state.

For two years, neither the regime nor the rebels seemed able to achieve military victory and hold the territory, resulting in a wide fragmentation of the country. On one side, the Syrian regime and its regional allies — Iran and Hezbollah — are increasingly backing and training proxies like the Shabihas and Jaish al Shaab. Recently, The Washington Post reported that Tehran was training up to 50 000 militiamen on the Syrian soil. The depth of the relations between these groups and state authorities is hard to measure but there have been rumors for instance, that Hilal Assad, a cousin of the president, was commanding one of the Jaish al Shaab brigades. On the other side, radical Islamic rebel groups are progressively outstripping the “mainstream” opposition. Western intelligence sources estimate that Jabhat al-Nusra appears to be more effective militarily than the Free Syrian Army.

In a nutshell, this development reflects a daunting reality for Syria’s future — the rise of militia warfare.

What does this mean for NATO’s policy vis-à-vis the Syrian conflict? So far, the effectiveness of the alliance’s posture relies on the ability to convey its message to Syrian authorities, but this implicitly assumes that these authorities are in charge and still have the control over their arsenal. But the fragmentation of the country, the vanishing of the state as the ultimate security player and the subsequent privatization of the conflict are challenging this very assumption.

For sure, a non-state threat would not render the systems deployed in Turkey irrelevant: they would still be effective at defending the country. But their deterrence effect may decrease. In that context, a not unlikely scenario would be clashes among militias that degenerate into factions targeting sites in southeastern Turkey that they believed to be military camps of the Syrian rebels. Although the Patriot batteries could defend the area — but not entirely —  Turkey and NATO would be facing a crucial challenge on the appropriate answer, especially if the militia responsible is considered to have ties with Iran and the remnants of Assad’s regime.

To prevent the threats from non-state actors and the violence that will result from the conflict's continuation, the key factor will be the strengthening of a central authority in Damascus — whether friendly to Western interests or not — that would mitigate the risks of militia warfare. But NATO is not suited for that,  nor should it be. It's only through the common understanding of the stakeholders, both inside and outside of Syria, that preserving the state infrastructures of the country in the post-Assad phase is in their own interest that scenarios like the one mentioned here will be prevented from happening. This also reminds us of one reality: NATO’s role on the Syrian issue remains and is likely to remain very limited.

Jean-Loup Samaan is a researcher for the Middle East Department of the NATO Defense College and a contributing writer of Al-Monitor.