An initiative to lift the European Union’s arms embargo to Syria and increase support to rebels has been met with strong EU opposition; the EU is unlikely to move further on that issue. 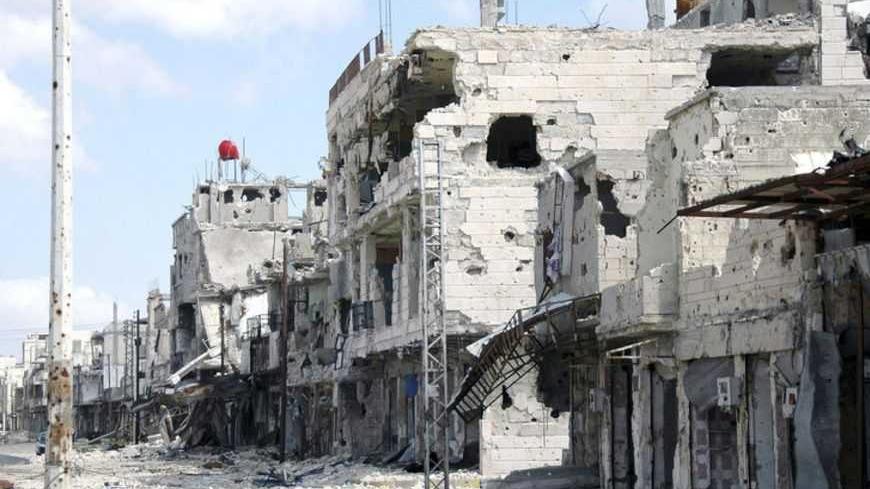 A view of damaged buildings at Baba Amro neighborhood in Homs city, after clashes between forces loyal to Syrian President Bashar al-Assad and fighters of the Free Syrian Army, in this photograph distributed by Syria's national news agency SANA, March 27, 2013. - REUTERS/SANA/Handout

These last weeks have been marked by a new diplomatic battle within the European Union over the question of lifting the current embargo on arms to Syria in order to raise the level of support to the rebels on the ground. The issue grew in earnest during an EU Summit in Brussels in mid-March when French President François Hollande stated straightforwardly, “We want the Europeans to lift the embargo on the weapons. Since we have to put pressure on and show we are ready to support the opposition, we have to go that far.” London is on the same page, as British Prime Minister David Cameron made similar statements in the days that followed.

The current EU arms embargo on Syria was imposed in May 2011, when the Assad regime was brutally suppressing the first peaceful protests. It included a ban on arms, military equipment and equipment which might be used for internal repression. It had already been slightly amended in February 2013 “to provide greater non-lethal support and technical assistance for the protection of civilians”.

The new initiative led by London and Paris aims now at allowing explicitly the transfer of weapons to the rebels. It reflects a significant evolution in the discussion of the support to the rebels. This occurs after another development in Washington as Secretary of State John Kerry pledged the provision of non-lethal aid amounting to $60 million. Until recently, the three Western countries that have been most active on the Syrian crisis had remained cautious, and sometimes opposed, on the issue of arming the rebels. True, there had been some forms of assistance and training provided to the Free Syrian Army, but overall it remained limited. It is worth noting that in practice the British-French initiative would even go further than the Obama’s commitment which includes only nonlethal aid.

This potential adjustment in Western policies is the result of the mutation of the Syrian conflict itself. For one year and a half, the Syrian issue was merely discussed within Western circles in reference to concepts such as the ”responsibility to protect.” However as the conflict is lasting and its regional ramifications unfold, the terms of the debate have been significantly altered and it has now become a matter of pure strategic stability. For the Western countries, the first significant change occurred following the shelling of villages and refugee camps in Turkey in late 2012. Ankara asked that NATO augments the air defense capabilities in its country and following the approval by the 28 allies, the US, the Netherlands and Germany deployed six Patriot missile batteries.

Still, the position of NATO on Syria is one of containment, meaning that it is limited to the defense of its allies. It is likely to prevent a spillover to the territory of the Atlantic Alliance but by no means can it alter the developments inside Syria. So can we explain this new shift to the offensive that would demand the EU lift its embargo?

This diplomatic move may be based on the realization of two intertwined negative trends on the ground in Syria. The first is that for all the tremendous efforts and progress made in the last two years, the Syrian opposition remains fragmented and did not yet reach a decisive military breakthrough against the regime. Specifically, the long-awaited battle of Damascus has yet to start. The second phenomenon Washington, London and Paris are considering very seriously is the radicalization of Syrian rebels and, in particular, the rise of Salafi Jihadism that undermines the efforts of the Syrian National Coalition as a central body. Factions such as Jabhat al-Nusra and Ahrar al-Cham are progressively outstripping the “mainstream” opposition in some areas of the country. Already Western intelligence sources estimate that Jabhat al-Nusra is more effective militarily than the FSA.

In that sense, the new move by the Americans, the British and the French aims at strengthening the coalition as the primary actor of the revolution. In other words, this policy shift can be understood as a measure to rebalance the forces within the rebellion to insure the leading pole is still the one that can work with the West in the post-Assad era.

However, in the EU context, this position has encountered strong opposition from a majority of the member states. It was verified during the last EU Foreign Ministers meeting in Dublin on the 22th and 23th of March. In the press conference, Austrian Foreign Minister Michael Spindelegger challenged the calculus driving French and British position by arguing, “Nobody can give a guarantee that weapons delivered to the opposition in Syria will end up in the right hands.”

While countries such as Austria or Sweden have expressed clear disagreement, Germany seems to be in two minds vis-à-vis the lifting of the embargo. German Foreign Minister Guido Westerwelle acknowledged the “good reasons” that have led Britain and France to push for this change but also emphasized the need for measures of assurance: “We are still reluctant on lifting the arms embargo. We have to help and to support the Syrian people … but … we have to avoid a conflagration and we have to prevent that aggressive offensive weapons come into the wrong hands.”

In the meantime, the evolution of the Syrian crisis is not supporting the British-French initiative. The recent nomination by the Syrian National coalition of Ghassan Hitto as interim prime minister, has been met with mixed reactions. Hitto, who lived in the US for the past 30 years, has the difficult task to bring leadership to the fragmented opposition and to enforce the coordination of efforts on the ground in the post-Assad era. His close affiliation with the Muslim Brotherhood and the fact that his candidacy was strongly supported by Qatar have led a group of 12 key figures of the National Coalition to suspend their membership to oppose the legitimacy Hitto’s election. It culminated with the resignation of Moaz al-Khatib last week end from the leadership of the Coalition.

This new internal crisis within the Syrian National Coalition will logically strengthen the position of those states who argue for sticking to containment. As a result, the diplomatic battle within the EU is likely to go on for the next weeks, if not months, the key date being June 1st when the sanction regime imposed by Brussels on Syria is scheduled for renewal.