France Out on Limb Over Syria

An assertive French policy on Syria has revealed the marginalization of France, and the EU, in dealing with Syria. 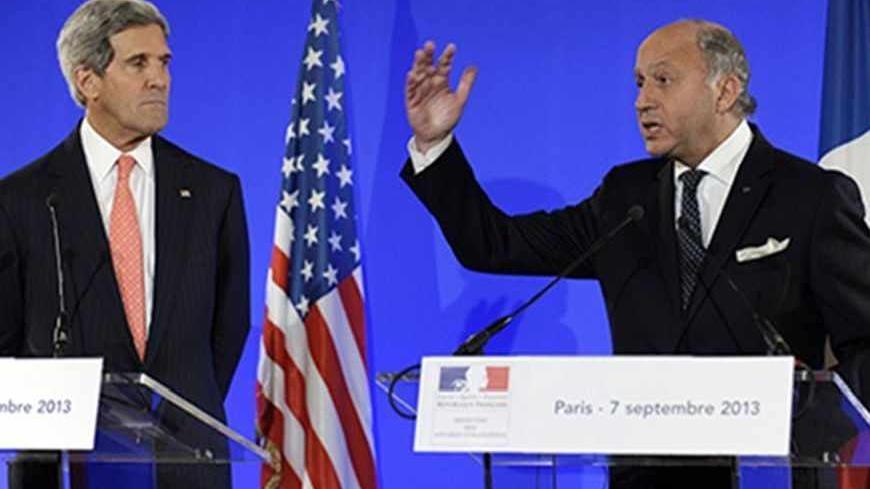 The latest developments in the diplomatic crisis over the use of chemical weapons on Aug. 21 in the Syrian conflict put France, arguably the most hawkish of the Western countries, in an embarrassing situation. Since the beginning of this new chapter in the Syrian crisis, French officials expressed by far the strongest resolve to retaliate against the [Bashar al-]Assad regime.

While US President Barack Obama carefully weighed his options for several days and British Prime Minister David Cameron consulted the House of Commons, French President Francois Hollande and his Foreign Minister Laurent Fabius had already pledged to “punish” the regime. The rhetoric used by the French mixed principles of “responsibility to protect” with the necessity to restore the “taboo” on the use of chemical weapons. Fabius even went as far as to suggest that the UN Security Council could be bypassed because of probable vetoes by Russia and China.

But as soon as Obama showed signs that he may not be so forthcoming on the launching of punitive military strikes, French assertiveness turned out to be mere razzmatazz. Obama's decision to seek congressional authorization for military intervention in Syria put Hollande in a very delicate situation. For the Elysee Palace — Hollande's official residence and meeting place of his ministers — the days of waiting were excruciating. Jean-Francois Cope, leader of the right-wing opposition in Paris, mocked Hollande as the “US president’s trailer,” while French think tankers noticed “for the first time in history a French military intervention depends on a vote in US Congress."

The second embarrassment for France came with the Russian proposal to push Assad to give up his chemical weapons. Consultations between US Secretary of State John Kerry and Russian Foreign Minister Sergey Lavrov sidelined their French counterpart and put Paris’ tough position against the tide of the diplomatic game. As a response, the French then tried — less than 24 hours after the Russian proposal — to regain the lead by presenting a resolution to the UN Security Council. The French draft was immediately dismissed by Moscow, as it appeared that the document suggested the authorization of the use of force — under Chapter 7 of the UN Charter — if Assad failed to comply with the chemical weapons transfer. Lavrov called that condition "unacceptable." Now, as Kerry and a team of US experts meet their Russian counterparts in Geneva to reach an agreement, it seems likely that the conundrum over the dismantlement of Syria’s chemical arsenal will be solved through US-Russian talks.

This diplomatic episode reveals the evolving power plays in the shadow of the Syrian crisis. The French assertiveness on the issue of chemical weapons was a logical continuation of French attempts to raise the international pressure on Assad. Over the last year, France grew as the fiercest Western opponent to the Syrian ruler. Hollande was the first Western head of state to recognize the Syrian National Coalition in November 2012 as “the sole legitimate representative of the Syrian people."

Soon, French boldness started shoving the diplomatic agendas of its EU partners. Last June, alongside Cameron, Hollande led the battle to block EU’s process of renewal of the arms embargo to Syria. The French-British obstructionism aimed to pave the way for the delivery of weaponry to the rebels. Such gambit irritated Germany, Sweden and Austria, which had expressed for months extreme caution on the policy of arming the rebels. German Foreign Minister Guido Westerwelle emphasized the need for measures of assurance: “We are still reluctant on lifting the arms embargo. We have to help and support the Syrian people, but we have to avoid a conflagration and we have to prevent that aggressive offensive weapons fall into the wrong hands.”

At the same time, the Elysee Palace modified France’s traditional policy regarding Hezbollah to back London’s plan to insert the Lebanese organization on the EU list of terrorist organizations. Although the British case built upon evidences of Hezbollah’s terrorist activities in Bulgaria and Cyprus, French rationale seemed to be mainly driven by the battleground in Syria. When Fabius confirmed French support for the British initiative, he did not mention the Bulgarian investigation first, but instead announced, “Given the decisions that Hezbollah has taken, and the fact that it has fought extremely hard against the Syrian population, I confirm that France will propose to place Hezbollah's military wing on the list of terrorist organizations.” Then came the latest report of the chemical attack in Syria on Aug. 21, and a week later, the pledge by Hollande to punish the regime.

This French activism has been at odds with the restraint of its allies — the Europeans or the Americans. German and Italian officials feel uncomfortable with the sound of French drumbeats. In particular, the Italians expressed their irritation as they fear this last French escalatory step could have side effects on the United Nations Interim Force in Lebanon (UNIFIL) forces placed under their command in Lebanon. As Iranian officials and Hezbollah alluded potential retaliation on Lebanese soil in case of military strikes on Syria, the Italian military sees French bravado as an ill-advised move that would jeopardize the safety of European troops deployed there.

In the end, the French discomfiture epitomizes — once again — the disarray among Europeans on the Syrian issue. All along, the Elysee Palace pretended it was leading forward the European position, when — in fact, for most of its EU partners — France was exacerbating their divergences. This matters for the credibility of the EU as a foreign policy actor, as it makes irrelevant any plan made in Washington to share the burden in the Middle East. In the long haul, it also has dramatic ramifications on the confidence among transatlantic allies. According to French daily Le Monde, Hollande was flabbergasted by Obama’s hesitation, and bitterly said to his close advisers, “If Obama does not strike, how can we believe he would help Israel in case of Iranian aggression?” Eventually, for the Syrians, it means that any diplomatic breakthrough is now likely, and only, to come through a bargain between the United States and Russia.