The European Union moves toward designating Hezbollah a terrorist organization as its arms embargo on Syria is allowed to lapse. 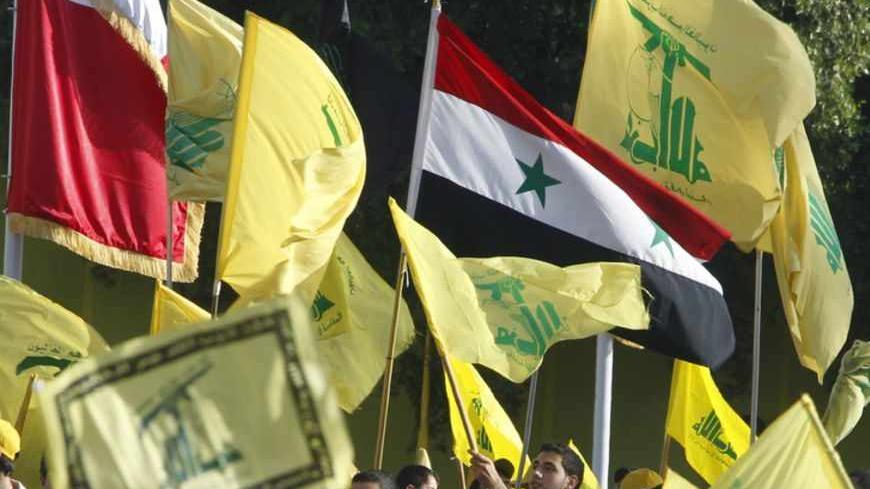 People wave Syrian and Hezbollah flags while watching Hezbollah leader Hassan Nasrallah during a live broadcast to supporters at an event marking Resistance and Liberation Day, in the Bekaa Valley, May 25, 2013. - REUTERS/Sharif Karim

On May 21, the United Kingdom formally requested that the European Union add the military wing of Hezbollah to its list of terrorist organizations. Details of Hezbollah’s criminal activities surfaced earlier in the year, and London has since been pushing for a change in EU policy toward it.

In February, the Bulgarian government announced that two of the individuals responsible for the July 2012 bombing at the Burgas Airport that killed five Israeli tourists and a Bulgarian bus driver “belonged to the military formation of Hezbollah.” That announcement came around the same time that Cyprus prosecuted a Lebanese-Swedish citizen who had confessed to being a Hezbollah operative surveilling movements by Israeli tourists for potential targets.

These two cases triggered heated exchanges within the EU but failed to bring about a policy change, which only the Netherlands and the United Kingdom supported at the time. A potential game change surfaced last week, however, with diplomatic statements from Germany and France, which had previously expressed caution and urged restraint.

The first indication of a shift came from Berlin, when a diplomatic source told Reuters on May 22 that “in the light of discussions we have had with our partners following the terrorist attack in Burgas, Foreign Minister Guido Westerwelle supports listing at least the military wing of Hezbollah as a terrorist organization in the EU.” Then, a day later, on the sidelines of a Friends of Syria meeting in Amman, French Foreign Minister Laurent Fabius confirmed that Paris too had changed its position and would support the British initiative.

Catherine Ashton, EU high representative for foreign affairs and security policy, has thus far remained silent on the matter, but German and French support for a new policy may be a turning point in the EU’s long battle over Hezbollah. In the next step, a special EU working group will convene on June 4 to discuss the British request in detail and its practical ramifications.

Adding Hezbollah to the list of terrorist organizations requires unanimity among the 27 EU member states. If on June 4 a consensus seems attainable, the designation would then be discussed at the level of foreign ministers at a June 24 meeting. In other words, the EU could finalize a decision on adding Hezbollah to its list of terrorist organizations before July.

The EU shift is not simply a matter of adding Hezbollah’s name to a list. As of today, Hezbollah can legally raise money in Europe, and in some cases donations to it are tax deductible. Within the EU, Germany is considered to be the center of Hezbollah activity, with, according to German intelligence, some 950 members operating there. Moreover it can be argued that the EU’s refusal to classify Hezbollah as a terrorist organization has been a powerful tool for the party in its quest for international respectability going back to the mid-1990s. A policy shift would require that all European companies and governments cease financial interactions with the movement.

This new round of discussions within the EU raises two primary issues. The first is that the British request is targeting the “military wing” of Hezbollah. London, unlike the Netherlands and the United States, has always made a distinction between what it considers to be Hezbollah’s military activities on the one hand and its political and social activities on the other. The British experience with the Irish Republican Army and Sinn Fein in Northern Ireland may help explain this debatable distinction, but it is nonetheless fictional.

Hezbollah is a well-structured organization with a robust bureaucracy and a centralizing executive body, Majlis al-Shura, that has oversight over all its activities — military, social, and political. As a result, it is uncertain how the EU would interpret the distinction between military and political wings and how this would affect the organization in Lebanese politics.

One practical option may be the targeting of a few individuals within the command structure of Hezbollah to be charged with planning the Bulgarian attack. There is precedent for this, from 2002, when the EU added seven Hezbollah operatives to its financial sanctions list for terrorism but refrained from condemning the organization itself.

The second issue is that the EU shift seems to be less driven by the Bulgarian investigation than by developments in Syria, especially the increasing visibility of Hezbollah fighters on the ground alongside the forces of Syrian President Bashar al-Assad. The British request came as the Syrian regime and Hezbollah launched a massive attack on Qusair, a city controlled by the rebels and only 15 kilometers (9 miles) from Lebanon. Hezbollah has been involved in numerous cross-border clashes with Syrian rebels over the last two years, as its leader, Hassan Nasrallah, argued that the party was defending Lebanese Shiites who live in the towns along the Syrian side of the border. The offensive against Qusair, however, is viewed as a new threshold in Hezbollah’s backing of the Assad regime.

Of note: When Foreign Minister Fabius confirmed French support for the British initiative, he did not mention the Bulgarian investigation first, but instead announced, “Given the decisions that Hezbollah has taken and the fact that it has fought extremely hard against the Syrian population, I confirm that France will propose to place Hezbollah's military wing on the list of terrorist organizations.”

Moreover, France and Germany’s caution were understood until last week as an understanding that designating Hezbollah as a terrorist organization could lead to a new round of clashes between the organization and its Sunni opponents in Lebanon. Prolonged fighting in Tripoli and a rocket attack on the Shiite southern suburbs of Beirut on May 26 point to the already high level of tension in the country.

On another front, it was understood that an EU terrorist designation might jeopardize the efforts of UN peacekeeping forces in Lebanon, in which a dozen EU nations have troops. In the end, the shift in the European calculus may also include the realization that it is no longer possible to disconnect Lebanon’s current and potential troubles from the Syrian war.

The EU shift on Hezbollah can in addition be read as a complement to the decision by Brussels to reconsider its weapons embargo against Syria and instead possibly arm the rebels. France and Britain had been pushing throughout April and May to lift the ban. Both decisions suddenly put the EU at the forefront of the Syrian battle, but they also constitute high-risk gambles: It is uncertain they will change the balance of forces in Syria, but they could most certainly drag Lebanon even further into the crisis.