UN forces in Lebanon face challenges that could undermine the force’s credibility and status. 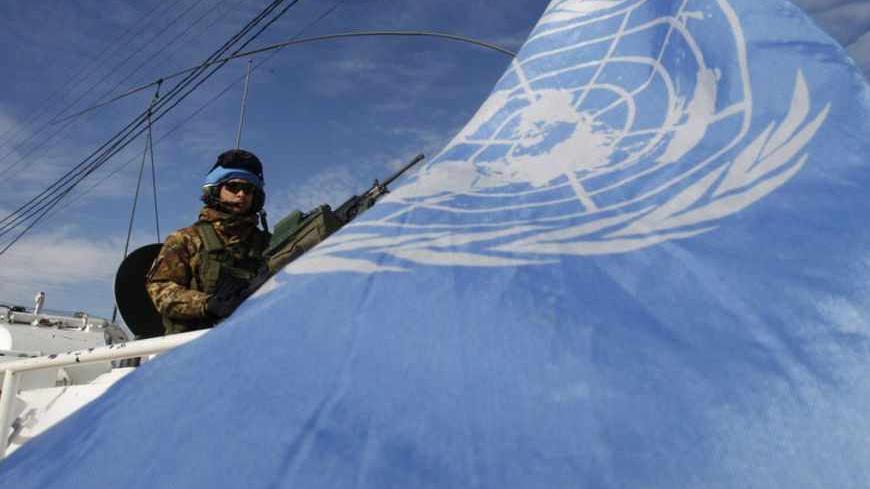 A UN peacekeeper of the United Nations Interim Force in Lebanon (UNIFIL) on an armored vehicle secures the area near the site of an explosion in the southern Lebanese town of Tair Harfa, Dec. 17, 2012. - REUTERS/Ali Hashisho

On May 14, UN Undersecretary-General for Peacekeeping Operations Hervé Ladsous traveled to Beirut to meet with Lebanese officials. Taking place in the midst of the Syrian crisis, the visit was intended as a measure of reassurance regarding the determination of the UN Interim Force in Lebanon (UNIFIL) to continue carrying out its mandate. During his meeting with Prime Minister Najib Mikati, Ladsous stated explicitly that rumors of a UNIFIL disengagement were “unfounded.”

Since 2006, an expanded UNIFIL has been a successful enterprise preserving the peace in south Lebanon. In fact, Israeli officers, Hezbollah fighters and UNIFIL officers all acknowledge that the area has experienced an unprecedented degree of stability. “Since the uprisings in Egypt and Syria, South Lebanon is oddly our most stable border,” one Israeli military planner told Al-Monitor.

The presence of UNIFIL is certainly not the sole factor explaining the peaceful status quo. The game of deterrence between Israel and Hezbollah also plays a role in it. Nevertheless, UNIFIL’s accomplishments should not be downplayed. When compared to the resources devoted to a typical peacekeeping operation, the number of contributing nations (38) as well as the overall number of troops (11,000) dedicated to UNIFIL has pointed to the seriousness of the international community’s commitment to maintaining quiet in southern Lebanon.

Today, however, the elements that helped UNIFIL successfully perform its mission are threatened. The first issue putting its operations at risk is the increasingly visible assertiveness of Hezbollah vis-à-vis peacekeepers in the south. As a French official in the Ministry of Defense reminded Al-Monitor, “UNIFIL heavily relies on cooperation with Hezbollah. There is no way it could perform its mission without this form of tacit coexistence.”

The arrangements UNIFIL has had to make with Hezbollah in some south Lebanese villages have been well documented over the years. In addition, UNIFIL officers have been aware of Hezbollah's military build-up in the area, a fait accompli contravening the idea of UN Resolution 1701 and its establishment “between the Blue Line and the Litani river of an area free of any armed personnel, assets and weapons other than those of the Government of Lebanon and of UNIFIL deployed in this area.” Still, pragmatism was allowed to prevail, and an implicit division of labor agreed to according to which UNIFIL forces monitored certain areas while Hezbollah maintained its guard over others.

This compromise worked well until late 2011, when numerous cases arose of the Party of God interfering with the UN force’s activities. For instance, UNIFIL officers recorded patrols being blocked in areas where they previously had experienced no resistance. The assertiveness of Hezbollah in the south was not new by any measure, but the scale was. This disregard of the UNIFIL-Hezbollah agreement may be Hezbollah’s way of reminding UNIFIL as well as Israel that despite its engagement in Syria, its forces are not being diverted from south Lebanon.

Some officials in France and Italy fear that European moves that might antagonize Hezbollah in its role alongside the forces of Syrian President Bashar al-Assad against the rebels could exacerbate UNIFIL’s difficulties. In May, the United Kingdom again requested that the European Union add the military wing of Hezbollah to its list of terrorist organizations. The major difference from previous British attempts is that France and Germany, two countries long considered accommodating toward Hezbollah, changed course and supported the initiative.

Still one country continued to express caution — Italy, which is commanding UNIFIL. Rome was irritated by the absence of EU coordination and assessment concerning the potential repercussions of the British initiative on the force's European contingents, provided by nine nations.

The second issue concerning the future of UNIFIL is the level of cooperation with the Lebanese Armed Forces (LAF). A key objective in 2006 was to “accompany and support the Lebanese armed forces as they deploy throughout the South.” Today it is estimated that only 10% of UNIFIL patrols are conducted jointly with Lebanese troops. In fact, clashes in the northern part of the country, particularly in Tripoli, between pro-Assad and anti-Assad forces, have led to a redeployment of Lebanese soldiers from the south to the north. The consequence for UNIFIL is that its mission is less and less about supporting the Lebanese state and more about being its stand-in. Moreover, the Lebanese Army has proved unable to restore order in the north, a reflection of the ongoing predicament of the post–civil war LAF.

Despite UNIFIL’s tribulations with Hezbollah and the LAF, one could argue that its raison d'etre remains relevant and that no regional player has any interest in seeing it leave. Both Israel and Hezbollah want to prevent a flare-up in the Lebanese theater. It does not help matters, however, that the third issue is the slow but steady decline in UNIFIL’s size, on the ground and at sea, as a result of safety concerns and financial burdens.

Whereas UNIFIL was supposed to comprise 15,000 men in 2006, the number never exceeded 13,500. As noted above, that is now at 11,000. For the Europeans, the drawdown began years ago. In 2006, European countries provided more than 60% of UNIFIL contingents. That now stands at 30% of the peacekeepers. The cuts in manpower have resulted primarily from the European financial crisis, but the rising problem of peacekeeper safety also plays a part. This was evidenced by Spain, a long-time key contributor, substantially lowering its participation. France and Italy also decreased their share of the burden, and according to insiders in Paris and Rome, it could decline even more. The result is that as more Europeans abandon leadership of UNIFIL, the higher number of contributing nations with small contingents becomes an unmanageable liability and a logistics nightmare.

For all these reasons, in the coming months UNIFIL could reach a threshold below which its strategic credibility is compromised. In particular, the political clout of UNIFIL without the Europeans would diminish. Since 2006, UNIFIL command has only been assigned to France, Spain and Italy. Indonesia, now the biggest contributor, has already tried to stake a claim to commanding the forces, though in vain because there is a common understanding among the UN Secretariat, Israel and Lebanon that the credibility of UNIFIL relies primarily on European political and military commitment. In addition, that Indonesia also has no diplomatic relations with Israel means that an Indonesian commander would be without influence. This is probably why during his trip to Lebanon Ladsous declared, “I cannot imagine that any of the countries who have been contributing solidly to UNIFIL, especially the countries of the European Union, is even considering a change of posture.”

His message may have been one of reassurance to the Lebanese but it was also one of warning to the Europeans.