With no date set for the Geneva Conference, the UN has so far been unable to come up with a peacekeeping plan for Syria. 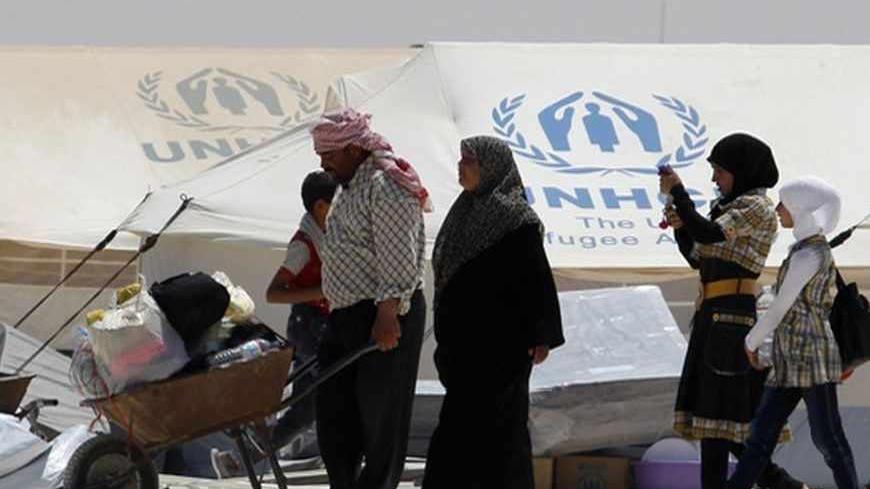 A newly arrived Syrian refugee receives aid and rations at Al-Zaatri refugee camp in the Jordanian city of Mafraq, near the border with Syria, on World Refugee Day, June 20, 2013. - REUTERS/Muhammad Hamed

While attention has been focused on if or when the Geneva conference on Syria will be convened, one element of the whole equation remains less documented: the role of the UN in a post-conflict Syria. The scope of the UN mission will affect the very viability of any Geneva plan for the transitional period in Syria. This is why at the UN headquarters in New York, the Department of Peacekeeping Operations (DPKO) in coordination with the Department of Political Affairs (DPA) have worked on various scenarios that each determine the level of UN commitment required.

The ideal scenario is a Geneva conference that concludes with a political agreement between both sides, followed by the deployment of UN peacekeepers to help local forces to bring safety back to the population. UN officials talk about “a path to political transition” that could include remnants of the old regime with elements of the opposition.

But all the stakeholders have their own vision of a “transition.” The United States has so far declared that Syrian President Bashar al-Assad’s departure is a necessary outcome of the transition, and has opposed the participation of Iran. Russia insists no such preconditions can be imposed. Syrian Foreign Minister Walid al-Muallem recently declared, “We head to Geneva not to hand over power to another side.”[1] As a result, planners in the UN Secretariat have no illusions about the likelihood of such scenario.

A second and more probable scenario — called “the gray scenario” by the officials interviewed — is one in which both sides agree to stop the fighting, but with fringes such as Jihadi fighters and loyalists to the regime who prolong the battle in specific areas of the country. This fear is driven by the last developments on the battleground. The battle of Qusair — the city that fell to Hezbollah and Syrian regime forces on June 5 — reflected the endurance of Assad and put him in a better position for bargaining than he was in when the United States and Russia first discussed Geneva II.

As a result, the US administration decided to change its policy of arming the rebels. Although the Obama shift was officially a response to the revelation on the use of chemical weapons by the regime, the calculus is clearly to help the rebels to regain some momentum on the ground before the peace conference. As long as both sides are being armed, the prospect of peace, or peacekeeping, remains unclear.

These scenarios produced by the DPA drive the estimates on the operational requirements prepared by the DPKO. Today, the biggest peacekeeping force is UNAMID in Darfur, with 20,021 soldiers deployed. These figures may look modest for a country such as Syria. But when asked, UN officials avoid specifying the operational conclusions of their contingency planning due to the high sensitivity in New York that begets discussions on the number of troops and capabilities. They underline, "The UN Security Council is the body that will decide on the force size.”

There are already two obvious challenges for a UN peacekeeping force in a post-conflict Syria. The first is its safety, particularly in the case of a “gray scenario.” Right now, the UN has difficulties in preserving its most exposed mission in the region, the United Nations Disengagement Observation Force (UNDOF), which has maintained the cease-fire in the Golan Heights since 1974. Following several clashes between rebels and loyal forces in the Golan, Austria recently announced that it would withdraw its contributing forces to UNDOF. The Austrian decision generated awe at the UN Secretariat. In the executive office of the secretary-general, one of his advisers described it as “completely irresponsible.”

Despite the extension of the UNDOF mandate agreed on June 27 by the Security Council, its future sustainability remains uncertain. In particular, the UN resolution stressed “the need to enhance the safety and security of UNDOF personnel.” The Security Council will still be mindful of these developments when or if it discusses a resolution on peacekeeping forces in Syria.

The second issue is the eligible nations to contribute to a UN mission in Syria. In particular, the question is whether major powers like the United States and Russia could be part of a peacekeeping force. Having the Americans, Russians and Europeans would give a UN force the political clout needed to keep the peace. But it also generates the risk that these troops would not be truly considered neutral. The case of UNDOF is insightful: according to the 1974 cease-fire agreement no permanent member of the UN Security Council can send troops.

If the participation of US, Russian or European forces is prohibited, another problem will arise — one of military credibility. Here, the relevant analogy is UNIFIL in Lebanon and the current European drawdown which is perceived as a danger to the standing of the forces. A complex post-conflict environment such as Syria is unlikely to be mastered by troops that do not have the experience of such terrains.

All these issues put into question the ability of the UN — if and when the Geneva conference occurs — to generate forces to deploy in Syrian territory. Who would provide the troops, and how would they be deployed? These questions can only begin to be answered once the Geneva process gets on track.