Ali Hashem examines responses in Lebanon and abroad to Bulgaria's accusations against Hezbollah for the Burgas bombing. 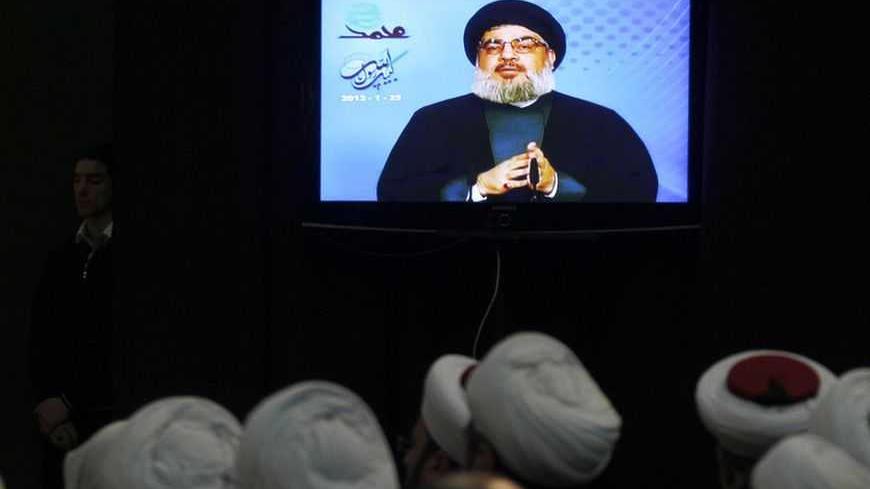 Hezbollah leader Hassan Nasrallah speaks in Beirut at a January rally to commemorate the birth of the Prophet Mohammed. - REUTERS/Sharif Karim

Whispering can be heard in Beirut. Everyone wants to know more about the Bulgarian investigation in which Hezbollah has been accused of carrying out the July 2012 attack in Burgas that killed five Israeli tourists. Few are those who dare to raise their voice and question, “Is it really Hezbollah?” Even fewer are those who dare to utter, “It’s time that Hezbollah pays the price!”

A few weeks ago, a visit as quiet as a whisper was made by a Bulgarian official to Hezbollah's stronghold of south Beirut. According to a source close to the Islamist group, at a meeting with a member of Hezbollah the Bulgarian allegedly said that “pressure is being exerted on Sofia to indict Hezbollah, but there was no clear evidence.” The source, who spoke on condition of anonymity added, “The accusation was a bit surprising to the group, as they never thought a sovereign state like Bulgaria would bow to pressure by the US and Israel.”

Hezbollah has thus far refrained from commenting openly about the incident, but party officials are said to believe that “this is part of the war on the resistance bloc." One official declared, “We still believe the Europeans know well were their interest lays.”

In a speech delivered today, Sheikh Naim Qassem, Hezbollah deputy secretary general, avoided direct mention of the Bulgarian affair, but did refer to an alleged Israeli campaign that is being echoed by Lebanese factions. Qassem asserted that the Israeli accusations “were fabricated after they failed to defeat us by war and other confrontations.” An official Hezbollah response is expected next week in a speech Secretary General Hassan Nasrallah plans to deliver in memory of slain military commander Imad Mughniyeh.

In the meantime, the opening of this new front has the potential to profoundly affect the coalition government that Hezbollah currently leads. With general elections only a few months away, Prime Minister Najib Mikati must at some point answer to the international community and at the same time defend his government domestically. The source close to Hezbollah optimistically observed, “Nothing will change. The group has been under pressure for years. They are used to such circumstances.”

Although the last part of his statement rings true, this time around pressure is being applied at a particularly critical time. Syria, Hezbollah's main ally is fighting a bloody civil war, and its president, Bashar al-Assad, is stridently resisting calls for him to step down. Iran, Hezbollah's main financial and political backer, is squirming under the international sanctions strapping its economy. Moreover, the Bulgarians’ public indictment precedes the convening of an international tribunal for four Hezbollah members accused of assassinating former Lebanese prime minister Rafik Hariri in Beirut in 2005, a charge Hezbollah vigorously denies.

The Bulgarian accusation will undoubtedly add to US and Israeli pressure on the European Union (EU) to outlaw Hezbollah as a terrorist organization. In the past, France and several other states have successfully beat back such efforts.

Bulgarian Interior Minister Tsvetan Tsvetanov explained in a press conference on Feb. 5 that the two Burgas-bombing suspects, holding Australian and Canadian passports, had lived in Lebanon since 2006 and 2010, respectively. According to Australian sources, the men went by the names Phillip Martin and Brian Jameson. At the conference, Tsvetanov reaffirmed, “We have established that the two were members of the militant wing of Hezbollah.”

After Tsvetanov’s announcement, the Bulgarian opposition rose to Hezbollah’s defense. Sergei Stanishev, leader of the Bulgarian Socialist Party, the largest opposition party in the parliament, alleged that the investigation had failed to find “categorical proof” about the co-conspirators or the organization behind the attack. “Pointing the finger at Hezbollah further endangers Bulgarian citizens.”

Another opposition leader, Volen Siderov, chairman of the nationalist party Attack, dismissed the report, asserting that investigators had succumbed to pressure from foreign capitals. He contended, “This is the game of the US and Israel, who are trying to jam us into it in order to create an artificial front and enemies.”

Israel and the United States, both of which assisted Bulgaria in the investigation, were the first to welcome the Bulgarian indictment. To them, Hezbollah has long been a bitter common enemy. The United States blames the organization for a number of kidnappings and attacks, including the 1983 bombing of the Marine barracks in Beirut that killed 241 Americans. As for Israel, its hostility is perhaps even stronger, as Hezbollah played a vital role in driving its military from South Lebanon in 2000 and fought a shockingly successful war against it in 2006.

Israeli Prime Minister Benjamin Netanyahu praised the indictment and accused Hezbollah of having built a “worldwide terrorist network.” He declared, “It’s time to name Hezbollah as a terrorist organization.” Netanyahu further offered, “We hope the Europeans learn the proper conclusions from this about the true character of Hezbollah.”

John Brennan, President Barack Obama’s top counterterrorism adviser, said in a statement from the White House that Bulgaria’s investigation “exposes Hezbollah for what it is — a terrorist group that is willing to recklessly attack innocent men, women, and children, and that poses a real and growing threat not only to Europe, but to the rest of the world.” Brennan urged the EU to place Hezbollah on its terror list and called on Europe and the international community to take “proactive action to uncover Hezbollah’s infrastructure and disrupt the group’s financing schemes and operational networks in order to prevent future attacks.”

The Europeans reacted coolly to the US and Israeli pronouncements. Catherine Ashton, the EU high representative for foreign policy, responded, “The implications of the investigation need to be assessed seriously as they relate to a terrorist attack on E.U. soil, which resulted in the killing and injury of innocent civilians.”

European leaders are keenly aware that classifying Hezbollah as a terrorist organization will have serious implications. France, Italy, Spain and other EU nations are currently involved in UN peacekeeping operations in southern Lebanon, a Hezbollah stronghold. Adding the group to the EU terror list would leave European forces without local cover in a hostile environment. The French also argue that designating Hezbollah a terrorist group could potentially destabilize the Lebanese government.

There had been early indications that the United Kingdom and the Netherlands might back a terrorist designation, but Tom Fletcher, UK ambassador to Lebanon, responded on his Twitter account when queried, “Yes, there was heavy US-Israeli pressure. But we are perfectly capable of coming to our own conclusions, based on our assessments.” The ambassador added, “Collective response should take account of backing for Lebanese stability.”

Fletcher praised the Lebanese prime minister's decision on Feb. 5 to cooperate with the Bulgarian government to uncover the circumstances of the bombing. He said he hoped that the “debate over responsibility will strengthen those in Hezbollah who know their interests are best served by rejecting terrorism.”

This last tweet, along with the Bulgarian minister's reference to Hezbollah's military wing specifically, points to the possibility of a compromise being reached at the next EU meeting, at which Hezbollah’s status will certainly be discussed. Such a compromise might see the rest of Europe adopting the UK model of dealing with Hezbollah, whereby London has outlawed the group’s military wing but continues to deal with its social and political branches. One might call it the live and let live model.

Ali Hashem is an Arab journalist serving as chief correspondent for the Al Mayadeen news network. Until March 2012, he was Al-Jazeera's war correspondent and prior to that a senior journalist at the BBC.