Hezbollah Prepares to Make Its Case On Bulgaria Indictment

Hezbollah will respond on Feb. 16 to Bulgarian accusations that the group is responsible for the Burgas bombing in July, writes Jean Aziz. 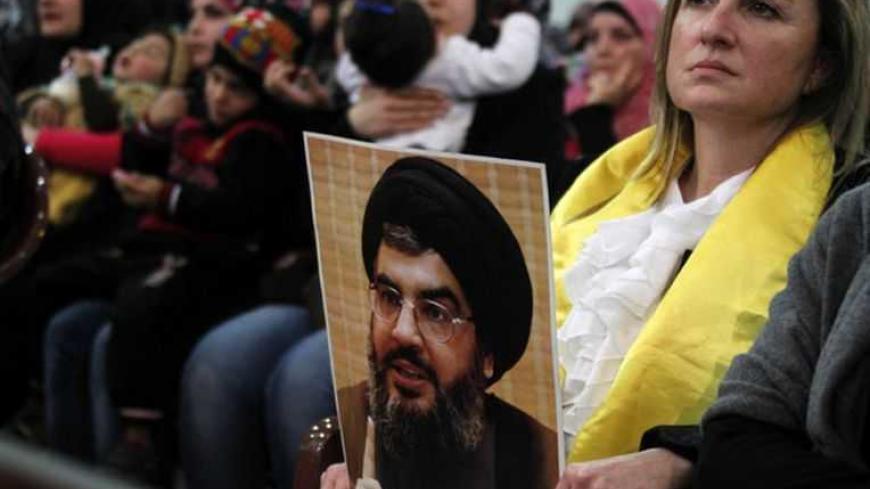 A woman holds a picture of Lebanon's Hezbollah leader Sayyed Hassan Nasrallah during a rally to commemorate the birth of Prophet Mohammad in Beirut's suburbs, Jan. 25, 2013. - REUTERS/Sharif Karim

Those awaiting Hezbollah’s reaction to the accusation that two members of its military wing were responsible for the Bulgaria bombing will have to wait until Feb. 16, as confirmed by circles close to the party in Beirut. In the meantime, those circles had a lot of dangerous things to say about the charges and their background. Below is part of what they said.

In few but decisive words, the circles close to Hezbollah categorically denied the charges that the party was involved in the bombing at Burgas, Bulgaria, on July 18, 2012. They said that if the party has anything more to say, it will be said by Hezbollah Secretary General Sayyed Hassan Nasrallah on Feb. 16, because, first, discussing such a sensitive issue is reserved to Hezbollah’s top official, and second because the occasion in which he will give his speech holds great meaning to the issue at hand.

On Feb. 16, Nasrallah will give a public speech in Beirut on the occasion of the assassination of three of the party’s leaders: Sheikh Ragheb Harb, whom the Israelis assassinated in his village of Jebchit in southern Lebanon on Feb. 16, 1984, when the Israeli army occupied the area; former Hezbollah Secretary-General Sayyed Abbas al-Musawi, who was killed by an Israeli air strike on the same day and place, but in 1992, as he was participating in the eighth anniversary of Harb’s assassination; and Hezbollah military official Imad Mughniyeh, who was assassinated in Damascus by an explosion in his car on Feb. 13, 2008.

It is very important for Nasrallah to speak about the indictment on Feb. 16 in order to place the issue in the context of Hezbollah’s persecution and encirclement. According to the Hezbollah circles, the party sees the Bulgarian indictment from two critical angles.

1. According to the circles, the indictment is linked to the expected new phase in Syria and is part of the global war waged by Washington and Israel against Hezbollah. The circles close to Hezbollah believe that Washington has followed a set strategy for 10 years where it has tried to break the bonds between the Palestinian organizations that reject any settlement with Israel on the one hand and Hezbollah, Iran and Bashar al-Assad’s Syria on the other.

Those circles see the Bulgarian indictment as part of that strategy, which started with the list of demands conveyed by Secretary of State Colin Powell to Damascus in December 2002. Assad rejected those demands at the time. It was said that the Syrian president escalated his rejection to the point of openly opposing Washington’s invasion of Iraq in April 2003. That was in contrast to what his father Hafez al-Assad did during the war to “liberate” Kuwait in January 1991.

Bashar al-Assad’s stance on Iraq placed Washington and Damascus on opposite sides. When Hafez al-Assad supported the U.S. against Saddam Hussein, he was allowed to complete his military control of Lebanon with Western and Arab blessings. In contrast, the stance taken by his son Bashar triggered a quarrel with the U.S. that is still going on 12 years later.

The French, the Americans and the Arabs united in opposing Assad. That ended by ejecting him from Lebanon in 2005. On that point, Lebanese MP Suleiman Franjieh, who is a close personal friend of Assad in Lebanon, said that at the time the Americans unequivocally said to the Syrian president: If you strike at Hezbollah, we will be willing to negotiate. But Assad refused. So they pressured him to redeploy the Syrian army from Beirut to the Bekaa. But Assad’s response was to fully withdraw from Lebanese territory, leaving the Americans and their allies the task of managing the Lebanese quagmire.

Then the Western powers started preparing for the so-called international tribunal for the assassination of former Lebanese Prime Minister Rafiq Hariri. At the time, Tehran was represented by President Mohammad Khatami and was considered a moderate face to talk to. So, according to the circles, Paris made with the Iranians an initiative that ended with a French-Iranian understanding, in a Western attempt to isolate Assad.

That understanding was soon translated in Beirut in two ways: first was the electoral alliance between Hariri’s son and Hezbollah; second was when international investigators issued a report accusing Syria of assassinating Hariri’s father. The report named Syrian officials as involved in the crime. It gave details about the truck bomb and about how it originated from Syrian army centers in Lebanon.

Less than two years later, the bet on breaking the bonds between Syria and Iran had apparently failed. Sidelining Hezbollah and Iran did not produce the desired results. And the strategy of appeasing Assad has also failed.

Suddenly, Hariri’s son broke his alliance with Hezbollah in Beirut, and the international investigation into Hariri’s assassination stopped accusing Syria. The investigation’s first report was dropped and the investigation turned its aim toward Hezbollah. It accused four persons, who allegedly belonged to the party’s military wing, of killing Hariri. That reversal resulted in Hariri’s son apologizing to Assad for accusing him of murdering his father. Hariri apologized in an official statement published by a Saudi newspaper on Sept. 6, 2009. Later, Hariri visited Damascus and slept in Assad’s home. Here too, MP Franjieh said that Western officials said to Assad: Now you’ll either strike at Hezbollah or somebody will replace you as head of the Syrian regime and do it.

But Bashar, again, did not obey, which triggered the events in Syria. There were bets that the regime would quickly collapse, but those predictions did not come through. As we near the second anniversary of the Syrian unrest, which started on March 17, 2011, things in Damascus appear to be heading toward a settlement, not victory for either side.

Thus, the bet on a new Syrian leadership that would strike at Hezbollah has failed. Hezbollah’s opponents are now forced to resort to other means to increase the local, regional and international pressure on the party.

In 2006, when the Western battle against Damascus was waning, they stopped accusing the Syrian regime of assassinating Hariri and aimed their accusations toward Hezbollah. Today, the West is backing off from pressuring Damascus, and is aiming toward Hezbollah by accusing it of the Bulgaria bombing, according to the circles.

2. The circles close to Hezbollah have an alternative interpretation to the Bulgarian indictment. That interpretation is about the long intelligence war between Hezbollah and Washington, a war that we will expound upon in our next article.