Although Hezbollah claimed indifference to the EU listing, many fear the GCC may follow suit, with negative consequences for Lebanese communities in the Gulf. 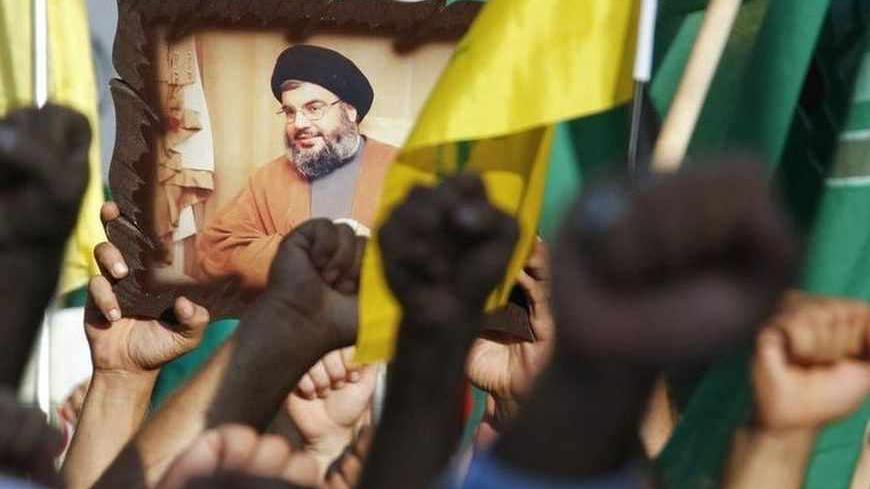 Protesters gesture as they carry Hezbollah and Amal movement flags and a picture of Hezbollah leader Hassan Nasrallah at a protest against a film made in the United States that mocks the Prophet Muhammad, Tyre, southern Lebanon, Sept. 19, 2012. - REUTERS/Ali Hashisho

After months of consultations and deliberate consideration, the European Union decided to designate Hezbollah's military wing as a "terror entity." As predicted in Al-Monitor in February 2013, the Europeans adopted the British approach to the organization, wherein a distinction is made between its military and political bodies to allow for future contacts with the Lebanese group's political leaders — despite Hezbollah Secretary-General Hassan Nasrallah declaring on May 25 that there is no military wing and no political wing, only one Hezbollah.

In a statement, Hezbollah expressed “its firm rejection to the EU's decision to set [the] 'military wing' on the list of terrorism,” adding that it regards the move as an “aggressive and unjust decision that has no justification and is not based on any proof.”

The group also asserted, “it looks as if the decision was written by American hands and with 'Israeli' ink, while the EU only had to add its signature in approval.” Apparently keen to differentiate between the EU decision and the people of Europe, it stressed that the decision does not “reflect the EU people's interests” and “contradicts with its values and aspirations that support the principles of freedom and independence, which it had always advocated.”

Sources close to the group regarded the move as "part of the worldwide war on the resistance bloc," explaining that dividing the group into a military and a political wing reflects the European determination to get around their decision, because they need to talk to Hezbollah, in south Lebanon, in Beirut and many other places.

In February 2013, Bulgaria indicted Hezbollah members for alleged involvement in the July 2012 Burgas bus bombing that left six Israelis dead. The indictment came after months of investigation, although the Bulgarian opposition accused the government of bowing to Israeli and US pressure. Hezbollah has denied the Bulgarian claims on several occasions, and as reported in Al-Monitor in February, a senior Bulgarian official visited Hezbollah's stronghold in Beirut and met Hezbollah officials to discuss the situation.

"What if Hezbollah decided, that its so-called military wing, to refuse to cooperate with the European troops working with the United Nations in south Lebanon?" a source close to Hezbollah asked rhetorically. "What are they going to do? Visit the political wing and discuss the situation?"

The EU decision comes as Hezbollah's role in Syria is being questioned, and as Gulf Cooperation Council (GCC) members states are considering taking the same steps as the Europeans. There is a real fear that such a move by the GCC could mean the end of good days for Lebanese in the Gulf, and moreover the return home of tens of thousands of Lebanese made jobless in the process.

One source close to Hezbollah theorized, "They want to exert pressure on Hezbollah via its people. This will never happen. Those people stood beside Hezbollah for years, and they will never turn whatever the pressure is."

In a May 25 speech to his faithful, Hezbollah leader Nasrallah stated, "Being on terror lists is not new," and went on to boast, "We actually take pride in the fact that Europe considers us as being able to change the regional equation." On this particular subject, he concluded with an Arab proverb, "Soak your terrorism list and drink its water." Translation: We couldn't care less.

One must ask, however, why Hezbollah is unconcerned about this latest development. According to one Hezbollah source, the group is not active in Europe and has no affiliated organizations or members there. He contended, "Hezbollah is only active in Lebanon, and only recently in Syria. Let us say they are active here in the region, but they don't have any interests in Europe, America or any other part of the world. Literally, the decision means nothing to Hezbollah, but might mean much more to the countries that took it."

Hezbollah's perspective on the British approach is instructive in understanding how it sees the implications of putting the group's "military wing" on the EU terror list. Although here have been no direct meetings between British and Hezbollah officials, messages have been passed through mutual friends, and until now, most Hezbollah MPs, ministers and officials who applied for entry visas to the United Kingdom were permitted entry.

One source commented on the situation, thusly: "The Brits know well that we have nothing to do in London, neither now nor in the future." He continued, "The British are good at compromises, whereas a decision on something can be taken, and those pushing for it can feel content, and those who are supposed to be the victims will feel no difference. … This is what they did, and what they pushed the EU to do."