The lack of unifying leadership among Syria's opposition has limited its effectiveness, writes Jean-Loup Samaan. 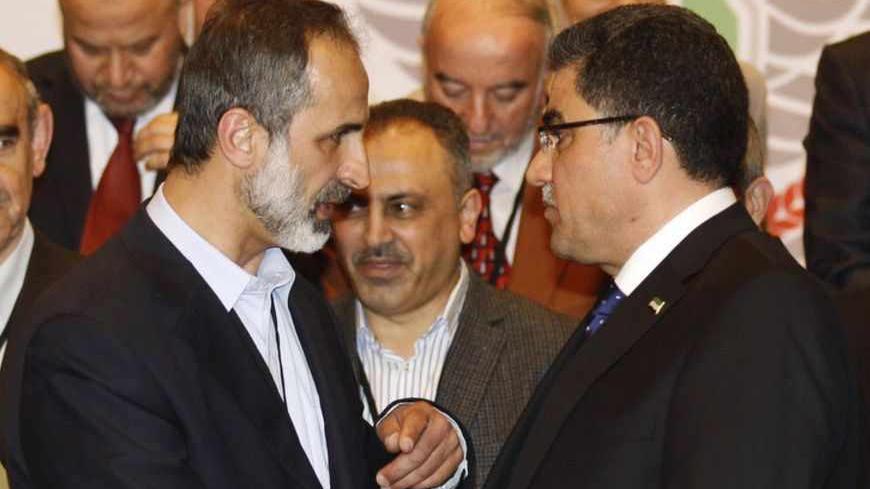 Despite its recognition as the legitimate representative of the Syrian people at the March Arab League summit in Doha, the Syrian National Coalition (SNC) has been torn by numerous crises that put into question its very credibility.

In particular, Moaz al-Khatib, the president of the SNC declared only a few days before the summit that due to disagreements within the coalition and with international partners, he would resign. Khatib eventually decided to remain until the end of his mandate, in May, to prevent a sudden leadership vacuum. This episode, however, reflects an ongoing trend in the difficult buildup of the Syrian opposition.

Since the beginning of the Syrian revolution in March 2011, media have grown bewildered by the apparent inability of the Syrians to form a robust political body responsible for conducting the rebellion against the regime of Bashar al-Assad. True, oppositions are always fragmented, and in recent history, the Libyan Transitional Council was no exception. Eventually, however, agendas tend to coalesce, at least temporarily, to topple the regime. This is not yet the case in Syria, after two years of conflict. The role of external military support is not here the decisive factor. Instead, cohesion among the rebels is.

This fragmentation of the opposition may be one of the legacies of the regime of Hafez al-Assad, father of the current president. The popular narrative that paints the Assad government as a mere sectarian regime ruled by an Alawite minority oppressing a Sunni majority is a strawman that ignores the complexities of Syrian power struggles. Both father and son maintained their hold on power by engaging the various parts of Syria's communities, including the Sunni bourgeoisie in Damascus and Aleppo and some elements of the Kurdish autonomists in the north. The elder Assad’s calculus shaped a trans-sectarian community of interests and privileges that benefited from the regime and that effectively divided his potential competitors. He assembled a caste composed of his Alawite relatives but also of opportunistic allies to help him pre-empt any insurgence from one or several communities.

The biggest challenge Assad faced was the coup attempt by the Muslim Brotherhood during the period 1979–1982 that led to brutal repression in Aleppo in 1980 and Hama in 1982. After that, the leadership of the Brotherhood was forced into exile, weakening the organization's influence in Syria. In addition, its dubious alliance with former vice-president Abdel Halim Khaddam in 2006 eroded its popular image. This explains why an official of the SNC interviewed off the record argued, “Within the SNC, the organization is much less powerful, much less influential and much less organized than the media assume.”

Apart from the Brotherhood, Syrian opposition organizations were barely known until 2011. When asked about this, an activist and now an SNC representative replied, “But historically there has never been any serious opposition in Syria! There have only been opponents!” Michel Kilo epitomizes this reality. A Christian intellectual, Kilo was active in the last two decades promoting democracy in Syria through petitions and peaceful demonstrations. Following his Beirut-Damascus Declaration that called in 2006 for the normalization of relations between both countries, he was arrested and sentenced to three years in prison. Until 2011, Kilo symbolized the ultimate opponent to the regime, but today he is not part of the SNC. Although he created the Syrian Democratic Forum, his organization has hardly been visible in the diplomatic arena.

A similar assessment can be made of Burhan Ghalioun. A Parisian professor of sociology born in Homs, Ghalioun was the first chairman of the Syrian National Council, from August 2011 to mid-2012. Opposing the militarization of the movement, he was increasingly criticized by his opponents for several diplomatic blunders. An Arab ambassador based in Paris confessed, “I always admired Ghalioun for his thoughts on Syria, but frankly, he was too much of an intellectual who left Syria in 1969 to become a political leader.”

Lack of political skills is indeed a recurring criticism regarding opposition leadership. A former Syrian ambassador who defected in late 2011 to join the rebels complained, “The SNC has made huge mistakes by appointing inexperienced intellectuals or social activists to high-level positions where you need real professionals.”

Such comments may reflect the disenchantment of technocrats who left the regime without obtaining satisfactory positions in the SNC, but they also parallel the frustration expressed by Western diplomats, one of whom declared having witnessed “awkward moments during meetings between ministers and SNC leaders where the latter were obviously not prepared.” Khatib, a former imam at the Ummayyad Mosque, is not immune to such criticism. One defector from the Assad bureaucracy ranted, “Until 2011, he was an imam. By no means was he trained to be at the forefront of a national revolution!”

Nevertheless, today the SNC faces a crucial test. With Al Khatib planning to leave, a new leader must quickly emerge. It might be Ghassan Hitto, the new interim prime minister charged with funneling aid to the rebels in Syrian territory no longer controlled by the regime. Hitto’s nomination was undermined because he had lived in the United States for the last thirty-three years and the allegation that Qatar was behind his candidacy. This captures the ultimate issue with the SNC: To many Syrians, it constitutes a mere aggregation of Syrians in exile backed by foreign powers without legitimacy inside the country. The disconnection between opponents at large and rebels on the ground is not only palpable at the political level but at the military level as well. For all the effort at building a cohesive military, the Free Syrian Army is no more than a "brand name," to use an expression from a recent UN report, that does not really command units on the ground.

As a result, the long-awaited leadership of the Syrian rebellion is unlikely to emerge from conferences in European or Gulf capitals, but on Syrian soil, possibly in the areas abandoned by the regime. Salafi groups like Jabhat al-Nusra already realize that the real battle is not in the corridors of Western chancelleries but on the ground, to win the hearts and minds of the Syrians left to their fate. It is time Western powers came to the same realization.

Jean-Loup Samaan is a researcher in the Middle East department of the NATO Defense College.