Is the Israeli-Russian honeymoon over?

Prime Minister Benjamin Netanyahu turns to his close ally President Donald Trump, hoping that the US president can help Israel fix the crisis with Russia. 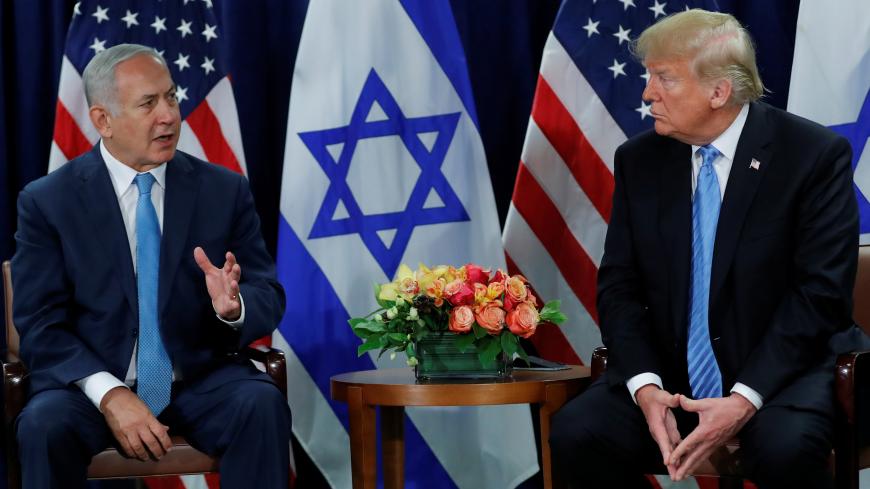 Israeli Prime Minister Benjamin Netanyahu speaks during a bilateral meeting with US President Donald Trump on the sidelines of the 73rd session of the United Nations General Assembly at UN headquarters in New York, Sept. 26, 2018. - Reuters/Carlos Barria

The crisis between Israel and Russia continues over the Russian reconnaissance aircraft shot down Sept. 17 by Syrian defense systems.

As of now, President Donald Trump is the last card left in the bad hand dealt to Israel with the downing of the Russian Ilyushin plane. Trump and Israeli Prime Minister Benjamin Netanyahu met Sept. 26 in New York, and many think the crisis between Israel and Russia will settle right at the top of Netanyahu’s agenda.

When it comes to his policies toward Iran and the way that Israel’s negotiations with the Palestinians are in a state of “deep freeze,” Trump is Netanyahu’s dream president, a fact that was reflected in the president’s address to the UN General Assembly on Sept. 25. The problem is that in that speech, he made no mention of Russia or Russian President Vladimir Putin, or the downing of the Russian Ilyushin by Syrian anti-aircraft fire. It made no difference that Israeli centers of power in Washington, headed by the highly connected Ambassador Ron Dermer, made a point of updating the president and his staff about what was happening as well as the kind of first aid that Israel needs immediately.

Now it is the prime minister’s turn. Facing a crisis, Netanyahu was to try to recruit Trump to get Putin to end the crisis and restore the situation to what it once was, or at least something like what it once was. Despite the initial assessment that the Russians would absorb the loss of their jet and make do with a public protest, it now looks like Moscow plans to change the rules of the game along Israel's northern front and deny Israel free “access rights” and its almost complete freedom of activity. As of now and until proven otherwise, it is clear to all parties that “the party is over” as far as Israel is concerned. The expected deployment of Russian-made S-300 batteries around Damascus will make any Israeli attack on Syrian territory more complicated, challenging and dangerous. An attack could now lead to the rapid deterioration of the situation along the entire front.

Israel has few illusions about how Trump could change this miserable situation. Netanyahu was not expected to ask Trump to declare war on Putin. Rather, he was going to try to convince the US president to make some gesture to Putin on issues important to Russia, in exchange for Putin reducing tensions on the new front that just opened against Israel. It will still take a few days before we know if Trump was receptive to this request, and even more important, if he actually plans to uphold his side of it.

The Israeli air force has a response to the S-300 batteries. It has been drilling responses to anti-aircraft batteries like these for the past two decades and knows how to overcome the challenges they pose. “The air force has already dealt successfully with more complex crises,” a former senior air force officer told Al-Monitor on condition of anonymity. “This is not some obstacle that can’t be overcome.”

The IDF has been re-creating a famous attack by the air force on the Syrian (but Russian manufactured) anti-aircraft system in 1982, which resulted in the total destruction of the Syrian-Russian system. It later became known as “the jet that bent the missile wing” (a play on words on the traumatic “missile that bent the jet wing” that Israel experienced during the 1973 Yom Kippur War]. The problem is that 1982 is nothing like 2018. Today the Russians are positioned in full force along Israel’s northern border fence and dominating the entire region. By the end of the week, Israeli military pundit Yosi Yehoshua was saying, “If such a missile battery puts Israeli jets at risk, it will be destroyed.” Yet despite this message, it is still obvious to everyone that the decision to destroy any S-300 battery that Putin just provided Syrian President Bashar al-Assad is too much for Israel at this stage. The damage it would cause could be irreversible.

Israel and Russia never had a closer, more intense relationship. Ever since the Russians first settled down right in the heart of Israel’s most sensitive front, Netanyahu has been a regular visitor to the Kremlin. He sees Putin more frequently than he meets with Israel’s natural ally, Trump. Senior Israeli intelligence, security and military officials visit Moscow frequently, and these visits are reciprocated. The possibility that the Americans have expressed concern about this intense cooperation between Israeli and Russian security forces should not be ruled out, which is why Israel updates Washington whenever any progress is made in the romance between Russia and Israel. Now is the moment that the Americans have been waiting for. It turns out that the romance between Netanyahu and Putin was fake all along. It was marginal and far less important than the real romance between Putin and the Assad regime, and with Iran and Hezbollah. Netanyahu was the kind of lover that Putin threw under the bus at the first sign of crisis.

Right after the Ilyushin was downed, Israeli ministers boasted about how Putin was “filtering Assad” and refusing to take the Syrian president’s calls. Putin did a great thing and “provided the goods” the day after the incident when he told a press conference that it wasn’t Israel that took down the Il-20 reconnaissance plane. But then, just two days later, all this bragging blew up in the Israelis’ faces. The Russians rejected the findings of the Israeli investigation and presented the Israeli air force — until then Israel’s strongest brand — as unprofessional, irresponsible and unreliable.

Given this hindsight, the chattering of the political class, their boastful statements, their boastfulness and their smugness are now being subjected to scathing criticism in Israel. Many politicians, including the prime minister, have boasted about Israel’s attacks in Syrian territory time and again, instead of embracing Israel’s long-standing tradition of radio silence — and public silence, too. Now this is all exploding in the Israelis’ faces.

Confusion continues to reign in Jerusalem as Israel faces the dilemma of what the right policy might be. Netanyahu, Defense Minister Avigdor Liberman and Chief of Staff Gadi Eizenkot all know the truth and are convinced that the results of the air force investigation are accurate. In contrast, analyses conducted in Israel have shown that the findings presented by the Russians are incorrect at best and fabricated at worst. The question is how Israel should act. Should it allow the crisis to escalate by showing how the Russian version is deceptive, or should it lower its head and let the murky wave pass? “One thing is certain,” a senior Israeli political source told Al-Monitor on condition of anonymity. “We do not have the privilege of allowing Iran to continue sending precision rockets or missiles to Hezbollah, or to allow it to continue its efforts to establish itself in the region, since these put Israel’s most basic interests at risk. Our efforts to thwart this will continue one way or another.”

“One way or another’’ seems to hint that Israel has more in its arsenal than F-16 fighter jets. It is worth remembering that the air force also has fully operation F-35 stealth bombers, but it has other options to harm Iranian efforts on the ground, including sea-to-ground missile and rocket systems that could be launched from Israeli navy ships. In other words, this war is here to stay.