Memo from Israel: Game still on in Syria

Israel's most recent airstrikes against positions in Syria was a declaration of intent, to signal to all parties that the game continues and the rules have not changed. 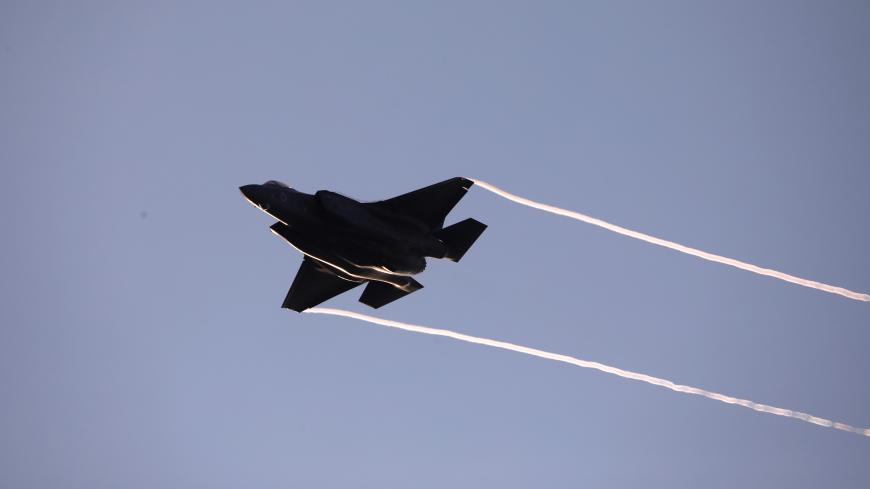 An Israeli Air Force F-35 flies by at a graduation ceremony for pilots at the Hatzerim Air Base, southern Israel, Dec. 26, 2018. - REUTERS/Amir Cohen

On Dec. 26, the Israel Air Force (IAF) held a graduation ceremony for its 177th pilot-training course at the Hatzerim Air Base in the Negev Desert. The cadets received their wings and became full-fledged pilots. The timing of the event, scheduled months in advance, proved to be particularly sensitive. Just a few hours earlier, according to foreign media reports, the air force had struck targets in the Damascus area. The reported strike followed a lengthy hiatus in similar attacks stemming from tensions between Israel and Russia over the Sept. 17 accidental downing of a Russian Ilyushin military aircraft off the Syrian coast by Syrian forces.

As is customary at such graduation ceremonies, Prime Minister and Defense Minister Benjamin Netanyahu gave a speech as did the Israel Defense Forces (IDF) chief of staff, Lt. Gen. Gadi Eizenkot, and the highly respected IAF chief, Maj. Gen. Amikam Norkin. Each referred obliquely to the events in the skies over Damascus.

“We are not prepared to accept the Iranian military entrenchment in Syria which is directed against us. We will act against it vigorously and continuously, including during the current period,” Netanyahu remarked. “I have said that we will not be deterred from doing what is necessary. Therefore, we are called upon and we act. President Trump's decision to withdraw the American soldiers from Syria will not change our policy. We are standing steadfast on our red lines in Syria and everywhere else.”

The two generals also hinted at continued Israeli activity on Israel's northern front in keeping with the “red lines” Israel had drawn. After the VIPs had spoken, the air force put on a show of force, with a flyover that included hair-raising aerobatic stunts by an F-35 Stealth fighter above the heads of the assembled guests.

Israel could not have sent a clearer signal: President Donald Trump might be pulling US troops from Syria, but we are staying. We will not be deterred by Iranian threats, we will not bow our heads to Russian pressure, and we will not ignore Syrian President Bashar al-Assad and his allied Lebanese Hezbollah militia.

On the other hand, Israel fully understands the complexity and volatility of the situation. The airstrike attributed to Israel in the late hours of Dec. 25 does not augur well. It marks another stage in the slow but ongoing slide by all sides involved on Israel's northern front into a danger zone, where each could easily lose control and set off an all-out conflagration. We are not there yet, but if this trend continues, we might be someday.

Israel has tried to operate under the radar since the downing of the Russian Ilyushin by Syrian anti-aircraft missiles fired to intercept an Israeli attack on Syria. The prime minister and the military chief of staff have said in different forums that Israel continues to operate in Syria despite tensions with Russia. These operations are probably of a different kind, using a reduced radar signature and avoiding noisy or public IAF actions, in short, more discreet and less traceable activities. Israel has many other attack options on the northern front, and it has presumably used them in recent months.

On Dec. 25, the IAF apparently reverted to open activity. The attack was different from many previous ones. According to Lebanese media, F-16 fighter jets, probably an eight-aircraft formation, fired precision-guided bombs from air space over southern Lebanon, without violating Syrian air space. More important, they did not set off Russian-made S-300 anti-missile batteries, which are still operated in part by the Russian military in Syrian territory.

No one on the Israeli or Russian side wants to have these batteries lock on to IAF planes conducting a bombing mission against Iranian targets in Syria. A top Israeli military source speaking on the condition of anonymity told Al-Monitor that if that were to occur, “The batteries would be destroyed, regardless of the operators’ identity.” A potential IAF bombing of these defenses, as noted, partly operated by the Russians, could result in a war not confined to Israel and the Shiite axis forces of Iran, Syria and Hezbollah.

Outwardly, Israel continues to signal seeming equanimity over the speedy US pullout from Syria, but officials concede in internal discussions that the move greatly complicates things for Israel. In a speech on Dec. 23, Eizenkot said, “The American decision to withdraw troops from Syria is a significant event, but there’s no need to overstate it. We’ve been dealing with this front for decades, alone.”

The pullout is not taking place in a vacuum, however. With each passing month, it becomes clearer that Russian President Vladimir Putin’s pledge to keep Iranian forces in Syria at least 80 kilometers (50 miles) from the Israeli border is not holding water. Following the most recent IAF strike, a senior Israeli official told The Associated Press that Iranian forces had returned to “the forbidden zone” and crossed the 80 kilometer line. Israel knows it has to keep the Russian bear as calm as possible, but it will never be able to truly trust it. Those on whom Israel usually relies, the Americans, are planning to exit the region and leave the IDF on its own.

Given this state of play, the Dec. 25 attack was needed as a declaration of intent, to signal to all parties that the game continues and the rules have not changed. According to Lebanese media reports, the decision to strike from southern Lebanon was planned well ahead and on purpose. Nonetheless, such attacks still hold tremendous explosive potential.

“The Syrians fire off anti-aircraft missiles like crazy, without distinguishing between targets,” a senior Israeli military source told Al-Monitor, speaking on the condition of anonymity. “We tried to explain to the Russians that this type of shooting is what endangers civil aviation in the region, not our activity.” Moscow, especially its Defense Ministry and forces on the ground in Syria, has rejected this line of argument. This means that one day soon, a mid-range Syrian SA-5 surface-to-air missile could mistakenly lock on to a passenger plane flying over the region, resulting in disaster and potentially setting the whole place on fire.

Israel faces something of a dilemma: to lay low and accept the introduction of tie-breaking weaponry into the region and Iranian entrenchment in Syria or to continue to attack despite the risks.

“What we don’t attack and destroy now will drop onto out heads later,” a senior IDF source said, speaking on the condition of anonymity. “Therefore, there is no real dilemma. We cannot repeat the previous mistake we made in allowing Hezbollah to build a huge missile base directed at us. One Hezbollah in Beirut is enough. We have no intention of putting up with a copycat in Damascus.”