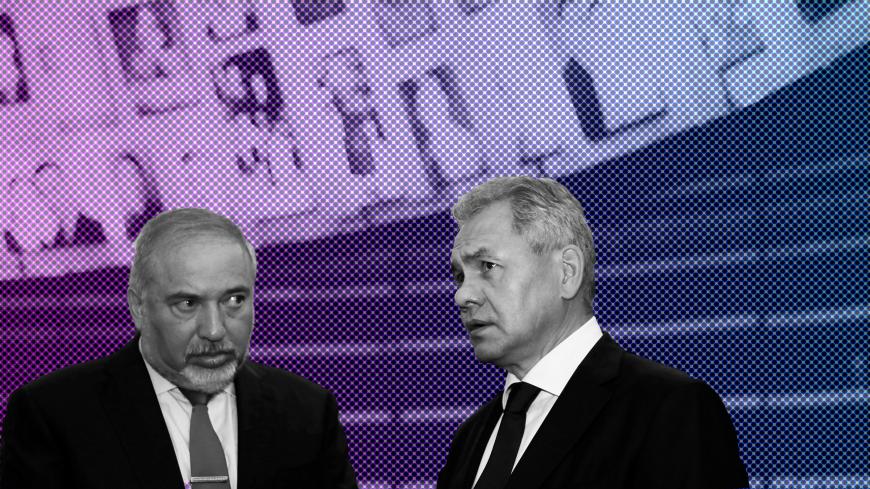 Russian Defense Minister Sergei Shoigu (R) stands next to his Israeli counterpart, Avigdor Liberman, as they look at pictures of Jews killed in the Holocaust, during a visit to the Hall of Names at Yad Vashem's Holocaust History Museum, Jerusalem, Oct. 17, 2017. - REUTERS/Ronen Zvulun

Russian Defense Minister Sergei Shoigu could not have dreamed about better timing for his visit to Israel. He arrived Oct. 16 only a few hours after the especially severe incident that occurred over the Syrian skies between the Israeli air force and the Syrian anti-aircraft deployment. Two days later, Iranian Military Chief of Staff Mohammad Bagheri threatened Israel that his country won’t accept Israeli attacks against Syria anytime it wants.

Indeed, Gen. Shoigu’s visit could not have come at a better time. He came exactly when the entire Middle East had its eyes on the airspace between Damascus and Beirut — which is crowded with Israelis, Russians, Syrians, Americans, Lebanese and air forces from many other countries. One would have expected that the hotline between the Israel Defense Forces and the Israeli Air Force (IAF) with the Russian army and its expeditionary force would be burning up. Yet the Russian defense minister himself arrived in Jerusalem and Tel Aviv in real time, met with Defense Minister Avigdor Liberman one day and Prime Minister Benjamin Netanyahu the next day (in Liberman’s presence), and he didn’t even skip the traditional visit to Yad Vashem.

The incident under discussion took place the morning of Oct. 16. IAF planes were conducting a photography mission over Lebanon when they were identified by an anti-aircraft SA-5 battery of the Syrian army. The battery locked on them and fired a missile at them. The Israeli planes were not really under great threat, and the Syrian missile did not endanger them. Nonetheless, Israeli retaliation was swift. According to an earlier decision that was made in March, the last time a Syrian anti-aircraft missile was launched at an Israeli plane, a quartet of Israeli jets took off from an IAF base for a bombing sortie. Four precise bombs were fired at the Syrian battery. The bombs made direct hits. The radar unit and launcher were destroyed, and the battery was entirely disabled.

In March, Liberman promised that the next time the Syrians shot at IAF jets, Israel would respond. That promise was kept the morning of Oct. 16. By the afternoon, the Syrian army made its official response. The Israeli airstrike will have “dangerous consequences,” said the Syrians. And then Shoigu arrived.

While the Russian minister was meeting with his Israeli counterpart at the ministry’s Tel Aviv headquarters, rumors were circulating in Israel that the Russians tacitly allow the Syrians to fire anti-aircraft missiles at the IAF planes. But this rumor, at least, was completely rejected by Israel. “No such thing,” said a source close to Liberman, who spoke to Al-Monitor on condition of anonymity. “The Russians are not involved in these decisions that sometimes, we assume, are taken in the presidential palace in Damascus. And sometimes they are operational decisions taken by the low-ranking soldiers in the field.”

Israel still doesn’t know if it was Syrian President Bashar al-Assad himself who gave the go-ahead for a Syrian battery to fire a missile at an Israeli jet. If it was Assad, that would constitute a Syrian effort to redefine the rules of the game in the aerial space and attempt to set red lines to IAF activity. Israel, of course, rejects these out of hand. The Israeli strike and destruction of the battery is also viewed as a glaring red line that Israel outlined in Assad’s backyard. The battery was located about 50 kilometers (31 miles) east of Damascus. Thus, Israel exemplified its earlier statement that anyone who fires on its planes will be destroyed. “Anyone who tries to hurt us,” said Netanyahu after the strike, “will be hurt in return.”

The more reasonable theory in Israel is that the Syrian battery identified Israeli jets, and the missile was launched by the lower echelons. “They are still under the sway of the strike on a weapons factory near Damascus, which was trying to improve the accuracy of missiles and rockets; this strike was attributed to Israel,” a high-placed Israeli security source told Al-Monitor on condition of anonymity. “Perhaps they thought that this was an assault on them and launched a missile.”

One way or another, Israel views the last incident as a redefinition of the new rules of the game: From now on, Israel will not ignore attempts to harm its jets.

All that remains is to explain the situation to the Russians. As far as we know, Israel updated the Russian command in Syria about the strike on the Syrian battery in real time or a very short time afterward. The topic arose, in depth, in the talks with Shoigu in Israel. The Russians asked for clarifications and got them.

“When we speak to them logically and explain to them our reasoning and considerations, they understand and reveal pragmatism,” a very senior Israeli source told Al-Monitor on condition of anonymity. “They know that our photography sorties over Lebanon are for self-defense purposes only and for collecting intelligence on the arsenal of rockets and missiles that are accumulating there in front of our eyes. We explained to them that we have no intentions of putting up with strikes on our planes.”

According to the Israelis, the Russians are operating in the regional space out of cold considerations, without unnecessary emotion. In the words of an Israeli security source in a conversation with Al-Monitor on condition of anonymity, “They are impressed at our consistency and understand our comprehensive considerations.”

In the course of the talks with Shoigu, the subject of growing Iranian influence in Syria also came up and was discussed in detail. According to sources, Liberman said that Israel will not accept an Iranian presence on its borders. That is a casus belli and a clear red line. Netanyahu said the same thing to the Russian general. According to a news item released on Oct. 18 in the Asharq Al-Awsat newspaper, the Russians agreed to limit the Iranian presence to within 15 kilometers (9 miles) of the Israeli border in the Golan Heights. The Israelis demand a minimum of 40 kilometers (25 miles). There is no official authorization for these news items, but the sides are clearly discussing the issue in great detail.

“There will be no Iranian presence on our fence, not in the Golan Heights and not in Lebanon,” a senior Israeli defense source told Al-Monitor on condition of anonymity. “Either it will be achieved in an agreement, or it will be elucidated by force. We, on our part, make it clear to all the parties involved that we will not compromise on this issue.”

To complete the cycle, Liberman is expected to take off the evening of Oct. 18 to go to Washington where he will meet his counterpart, Secretary of Defense James Mattis, and other senior officials of the US administration. Once again, Liberman will try to anchor Israeli policy as outlined here and encourage the US administration in its new policy against Iran and against the nuclear agreement, as was reflected in President Donald Trump’s speech on Oct. 13.

The Middle East powder keg needs ongoing, careful maintenance around the clock to prevent an explosion. Meanwhile — at least from the Israeli perspective — so far, so good.