How will Israel respond to Assad’s warning? 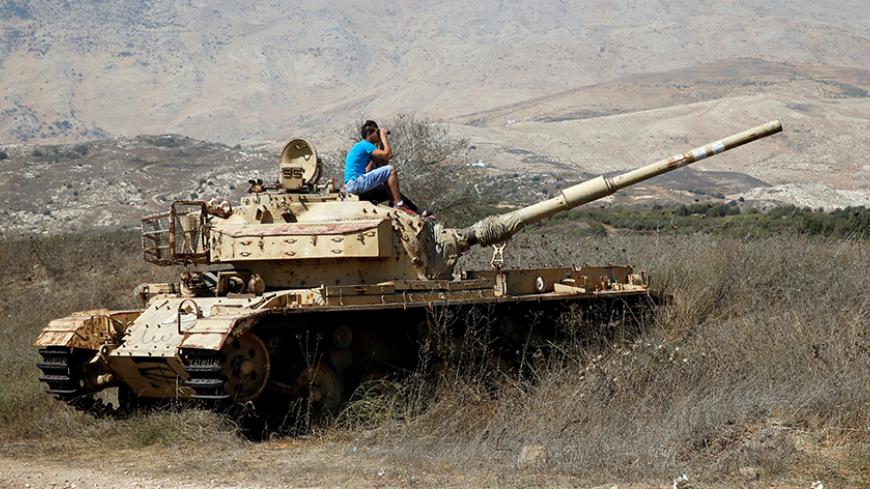 A man sits on an old tank as he watches fighting taking place in Syria as seen from the Israeli side of the border fence between Syria and the Israeli-occupied Golan Heights, Sept. 11, 2016. - REUTERS/Baz Ratner

Until now, whenever a mortar shell or stray artillery fire from Syria’s civil war landed in Israeli territory in the Golan Heights, Israel made a point of attacking a Syrian position or mortar belonging to the Syrian troops loyal to President Bashar al-Assad. It was part of a formula developed by Israel over the past few years, ever since the Syrian civil war started lapping against the border fence in the Golan Heights. So far, the strategy has proved itself effective; the Israeli Golan Heights have remained relatively quiet, apart from a rather random and even rare dribble of mortar fire that landed here and there, in unpopulated areas.

Over the past two weeks, however, the situation has changed. The number of mortar shells landing in the Israeli Golan Heights has increased considerably. Meanwhile, Israel has concluded that an automatic response targeting the Syrian army has worn thin and is not necessarily the right response. “It is not impossible that the next time this happens, the various rebel groups will be the ones to take a hit from us,” a senior Israeli military source told Al-Monitor on condition of anonymity. “This game must end. We are completely aware of the fact that it is not just mortars and bombs fired by Assad’s army that are landing in Israeli territory. On quite a few occasions, it is rebel fire. As such, the immunity granted to the rebels until now is over. From this point on, whoever is responsible for the fire will suffer the brunt of the response.”

The Israeli statement also comes against a backdrop of growing international criticism of the Israel Defense Forces’ response policy. Russia Foreign Minister Sergey Lavrov led this criticism with rather harsh comments Sept. 13, saying, “There is the need to show restraint and not to allow any provocations in the Golan Heights. There are terrorists universally recognized as enemies of mankind in the Golan Heights, but, of course, dealing with them including through airstrikes should remain within the UN Security Council resolutions.”

Lavrov was speaking about Jabhat Fatah al-Sham, formerly known as the al-Qaeda branch Jabhat al-Nusra. An increasing number of international bodies believe that Israel is helping this organization, whether directly or not. Knesset member Akram Hasson (Kulanu Party), an Israeli Druze, even said so explicitly in interviews and online posts last week. As it turned out, Israel did not ignore the criticism and decided to change its policy. From now on, Assad will not be the only one to pay the price for the stray mortar fire.

Israeli air force jets and drones, which took part in a sortie targeting one of Assad’s military installations Sept. 13, were surprised when the Syrian anti-aircraft system fired two anti-aircraft surface-to-air missiles at them. To be more precise, it wasn’t actually at them, since none of the Israeli aircraft was in any danger during the event. According to an Israeli assessment, the missiles were fired symbolically, to signal that Syrians have also stopped playing games, and that Assad will no longer restrain himself from responding to systematic Israeli assaults against his forces.

“It is our estimation that Assad didn’t really want to shoot down one of our planes,” a senior Israeli military source told Al-Monitor on condition of anonymity. “On the other hand, he does want to send us a message. The balance of power in the civil war, which has turned lately to his advantage, has restored Assad’s confidence. He is trying to regain sovereignty, too. What he is effectively signaling is that we should start to count him in. He is no longer present/AWOL. He is someone who will stand up for his rights.”

Israel admits that until now, the various rebel groups have exploited the situation for their own benefit. “It was an ideal situation as far as they were concerned,” a senior Israeli military source told Al-Monitor on condition of anonymity. “They fired like crazy wherever they wanted and if a shell missed, Israel immediately took out one of Assad’s mortar positions or armored vehicles. It was [for them] a classic win-win situation. The time has come for this situation to change.”

These frequent trickles of mortar fire have forced Israel to station an “Iron Dome” anti-missile battery in the Golan Heights for the first time in a very long time. This battery has already succeeded by shooting down two artillery shells fired at the Golan Heights on Sept. 17. “We stationed Iron Dome in the Golan Heights so as not to take any unnecessary risks,” a senior source in the IDF told Al-Monitor on condition of anonymity. “Someone could seize control of the Syrian launchpad and fire at the Golan Heights intentionally at any given moment. As of now, we have full coverage of the Golan, but we hope that the various forces squabbling across the border realize that anyone who puts the Israeli part of the Golan Heights at risk will pay a heavy price for it.”

Even though Syrian forces failed to hit the Israeli jet after firing the anti-aircraft missiles, the Syrian regime jubilantly and falsely reported that two Israeli aircraft had been downed. While the Syrian missiles did not endanger the Israeli jets, that same evening Israel sent a blunt and focused warning to Damascus. Assad knows that if he continues to tug at the rope, it would take very little effort on Israel’s part to cause him enormous harm. On the other hand, Israel also knows that Assad has the backing of Russian President Vladimir Putin. Furthermore, it is not at all certain that Assad’s opponents are in any way preferable in terms of Israel’s interests.

“It is a very precarious dance,” a Israeli political source told Al-Monitor on condition of anonymity. “Israel must keep everything low-key. It must not be identified with any of the sides, and it must do everything to stop the trickle of fire in its direction. Simple it’s not.”

In the end, Israel’s security assessment remains the same. The trickles of mortar fire hitting the Golan Heights are chance occurrences, rather than the result of intentional fire. “There are no safety measures or safety officers in the war in Syria,” a military source told Al-Monitor on condition of anonymity. “They fire whatever comes to hand in every direction, without giving it a second thought. Russian involvement boosted Assad’s self-confidence, and he is back in the game, even in the Golan Heights. This means that we must do everything we can to ensure that the game doesn’t reach us. That’s exactly what we’re doing. So far, we’ve been successful for the past five years. We will not let anyone ruin that statistic.”