Israel's air force is investigating a triple failure to bring down a drone that flew over the Golan Heights and is still unidentified. 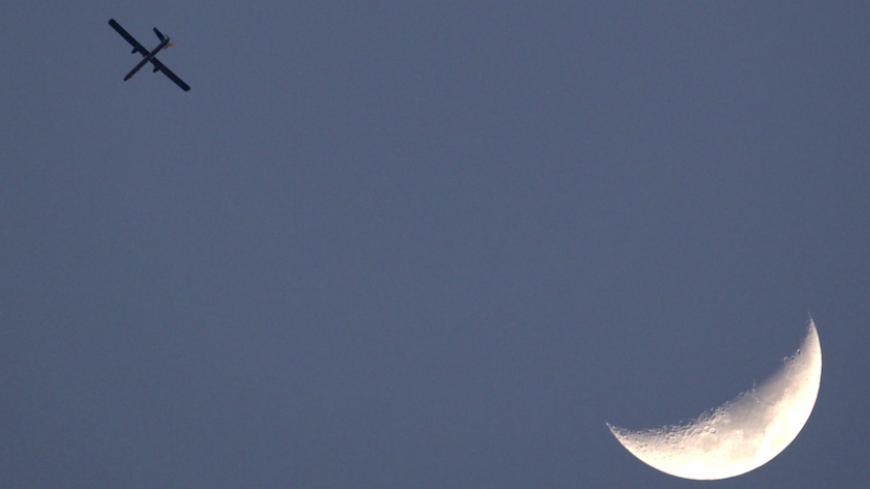 The Israeli air force is not used to failure. Thus the corps, which had become synonymous with excellence and meticulousness, has been in a quandary for the last 10 days: On July 17, it launched two Patriot missiles at the unmanned aerial vehicle (UAV) that penetrated Israeli airspace over the Golan Heights zone, and the two Patriots missed their mark. An F-16 fighter jet was also dispatched against the mysterious UAV and launched an air-to-air missile at it, but also missed the target. To the air force’s great consternation, the aircraft succeeded in turning around to disappear into Syrian territory, as fast as it came.

Until now, the air force does not know the answers to key questions: What kind of UAV it was, who launched it and why they were unable to intercept it. Al-Monitor received information that the UAV hovered above Israeli territory for about 30 minutes. In air force terms, this is practically an eternity.

“The investigation is underway,” a high-placed source in the air force told Al-Monitor this week on condition of anonymity. “It is still in Operations Research. At the moment we cannot publicize its findings. We hope that we will know what exactly happened and how, and that we’ll be able to draw the appropriate conclusions.”

The source added that the incident took the air force by surprise. “Patriot missiles have a proven ability to intercept UAVs. They accomplished this successfully in training exercises and also in real incidents in the Protective Edge campaign,” he added. “This time we didn't accomplish our mission, and the most important thing is to understand why.”

This was the first embarrassing failure of the Israeli Patriot missile battery that has long protected the country’s north. On Sept. 23, 2014, an Israeli anti-aircraft missile shot down an Su-24 Syrian attack plane that had penetrated Israeli airspace above the Golan Heights. The month before, a Patriot missile had intercepted an unmanned aerial vehicle, apparently the property of the Syrian air force. At the time it seemed that the Patriot provides Israel with immediate response capabilities even more efficacious than interception aircraft. Then, along came the current failure.

In certain respects, the interception of unmanned aerial vehicles is viewed as more challenging than bringing down fighter planes. The reason: These aircraft are smaller than fighter planes, sometimes considerably so. Their slowness makes them a difficult target for fighter plane missiles and also interception missiles that are designed to lock onto much larger and faster bodies. These qualities (or ostensible weaknesses) give UAVs certain advantages.

The more important question that is now being asked in the Israeli air force is: Who operated the UAV that was not intercepted? Was it a tool of the Syrian air force, which — while trying to collect intelligence on the rebels in the Golan zone — penetrated Israeli airspace by mistake and turned back? Or perhaps it belonged to the Russian air force that came to assist Syrian President Bashar al-Assad’s forces and accidentally crossed the border?

But there is another, though remote possibility: that it was a Russian aircraft that tried to probe Israel’s borders and perhaps collect intelligence on Israel’s massive, sophisticated deployment in the Golan Heights. In such a case, it is still not completely clear to the Israeli air force what its response should be.

It has already been reported in Al-Monitor from the mouth of a very senior Israeli military source that a Russian plane penetrating Israeli airspace will not be shot down. This policy is a stark contrast to the ironclad rules and permanent orders in the Israeli interception deployment that anything crossing the border will be shot down, no questions asked, as Israel is a small country and its response time is extremely short. But in the event that a Russian plane crosses the borders, the orders are no interception, period.

“We won’t make the mistake that [Turkish President Recep Tayyip] Erdogan made [downing a Russian warplane in November 2015],” an Israeli military contact told Al-Monitor on condition of anonymity. “The Russians are not our enemy, and a Russian plane does not threaten Israel. We are talking about a mistake, and there is no need to shoot down a plane.”

On July 17, it was not known who had launched the UAV that penetrated the Golan Heights airspace. Nevertheless, Israel fired two Patriot missiles at it. What would have happened if the aircraft had been downed and it turned out afterward that it was Russian? Israel doesn’t really know the answer to that. A UAV is not in the same category as a fighter plane manned by Russian pilots, like the one that was downed last year by Turkey. One way or another, the air force will not rest until it reveals why two Patriot missiles missed their target, as did the F-16 air defense fighter jet. Israel’s well-known record of maintaining absolute aerial superiority and zero tolerance for allowing foreign aircrafts to penetrate the State of Israel’s airspace must be restored.

In the early days of Russian involvement in the fighting in Syria, Israel had hopes that some kind of ongoing coordination and connection would be maintained between the Russian forces (especially the Russian air force), and the IDF and the Israeli air force. Now it is clear that such coordination simply does not exist. There are no channels of communication between the two air forces, and the Russians do not always transmit notices to Israel before they embark on aerial activity in regions tangential to Israeli borders or Israeli air force activity. This is despite the well-publicized meetings between Israeli Prime Minister Benjamin Netanyahu and Russian President Vladimir Putin, one of which had been attended by Israeli Chief of Staff Lt. Gen. Gadi Eizenkot in September 2015.

The alternative mechanism created between the sides is a de-confliction mechanism in which Israel tracks Russian activity on its radar and attempts to avoid being active in the same regions at the same time. Thus, Israeli activity is carried out much more meticulously now than in the past to avoid possible friction with the Russians.

Israel is not especially worried about this state of affairs, mainly because the Americans are keeping close, stringent tabs on the contact

s between the Israeli and Russian armies. “We cannot allow any doubts to form regarding the identity of our strategic ally,” an Israeli military source told Al-Monitor on condition of anonymity. “Russia is a friendly foreign agent operating in the area, and we do not interfere in its activities. The United States is our strategic ally.”