Fighting on Golan border puts Israel on the spot

Israel has intercepted a drone over the Golan Heights, but turned a blind eye to a Syrian warplane near its border, highlighting the complex reality of the war in Syria and the difficulty in calculating what is in Israel's best interest. 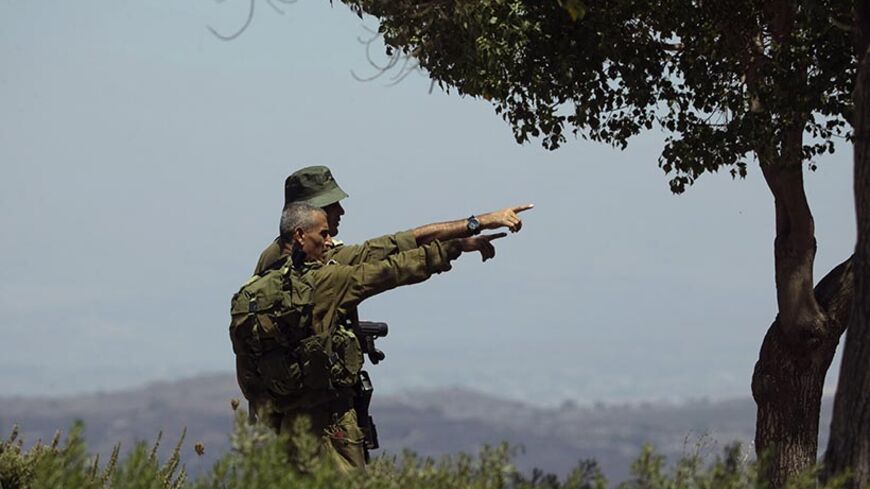 Israeli soldiers observe the Syrian side of the Quneitra border crossing between the Israeli-controlled Golan Heights and Syria, Aug. 29, 2014. - REUTERS/Ronen Zvulun

On Aug. 27, a Syrian warplane attacked insurgent positions in the area of Quneitra and then returned safely to its base somewhere in Syria. On an ordinary day, there is no way a plane appearing over Quneitra, literally along the Israeli-Syrian disengagement line, would have returned home safely. The Israeli Air Force (IAF), with its interception systems, is constantly on alert. Identifying a foreign jet grazing the country’s northern border would normally lead to an immediate interception. That, however, was not the case in this instance. It is believed that Israel weighed the situation and decided to turn a blind eye, allowing the Syrian plane to carry out its mission without shooting it down. This episode might be a telltale sign of the Israeli government's tendency these days to prefer Syrian President Bashar al-Assad to the insurgents fighting him.

A few days later, on Aug. 31, an unmanned airborne vehicle (UAV) was intercepted at the exact same place. An IAF Patriot battery deployed in the Upper Galilee fired a missile, easily downing it. The craft was initially reported to be a Syrian drone. Then reports emerged that it was probably an Iranian UAV used by the Syrian military. Did Israel regret having shot it down? Did Israel exercise added discretion, deciding that an Iranian drone on its border meant crossing a “red line”? Was it indeed an Iranian UAV? If so, could Israel have known about it in real time?

When such incidents unfold, the military and the political decision-makers have only a few seconds to call the shots. The Golan Heights is a tiny area. Indeed, Israel is so small that a fighter aircraft can cross it in just a few minutes. On Aug. 27, Israel turned a blind eye. On Aug. 31, however, an interception took place. These different responses perfectly symbolize the internal debate in Israel, the difficulty of decision-making, as well as Israeli (and global) embarrassment regarding the highly complex situation in Syria. How can Israel know which side it should prefer? Should it choose the murderous Assad — an ally of Iran and Hezbollah but also a man of his word under whose regime the Golan Heights remained quiet for 40 years — or a mixed bag of gangs, some of which are secular and pragmatic but most of which are jihadist and completely off their rockers?

Given the broader picture, Israel has long decided to straddle the line when it comes to the civil war in Syria. Just as during the Iran-Iraq War, Prime Minister Menachem Begin wished “success to both sides,” the chaos in Syria, strategically speaking, is not a negative thing from Israel’s standpoint. Once considered one of the key threats to Israel’s national security, the Syrian military currently no longer poses such a threat. The northern front, which used to present an existential threat, has become defunct. From an Israeli perspective, the ongoing exchange of blows in Syria, which keeps it bleeding and torn between different forces, is not necessarily a bad thing.

There is also, however, the narrower picture, namely, the front at the Golan Heights. For the past 40 years, Israel enjoyed complete quiet in that region, which developed into a pastoral, serene tourist gem with wineries and farms galore, touring trails and bustling communities. To wear down Israel, Assad used Hezbollah. The “axis of evil” spanning from Tehran via Damascus to Beirut confronted Israel along the Lebanese border. The Golan Heights, meanwhile, remained a peaceful region.

Quite a few people in Israel are now deriding those who preached for peace between Israel and Syria, including handing the Golan Heights back to Syrian President Hafez al-Assad and later to Bashar, his son. “What would have happened if such a peace agreement had been brokered back then?” ask the detractors, who hail not only from the political right but also from centrist circles. “What would have happened is that Jabhat al-Nusra would have fired at Tiberias, taken over the Sea of Galilee and imperiled the Galilee. Luckily, we have the Golan Heights.”

While this argument makes sense, it is not particularly relevant. Looking backward, to what might have been, is futile given that so many dangers are looming when one looks forward. In terms of the Golan Heights, if gangs of insurgents seize the area bordering Israel, that region could turn into a terror-beleaguered frontier. The war of attrition could resume. A reality in which terrorist acts are perpetrated against the communities and the tourist industry could turn life for Israelis in the Golan Heights into a living hell.

It is against this backdrop that Israeli hesitation is evident. “We can’t support Assad,” a very high-ranking security official told me about two weeks ago. “We’re talking about a man who butchered tens, if not hundreds of thousands, of his own people and used chemical weapons against civilians. But on the other hand, we aren’t oblivious to the reality of the murderous jihad of the Islamic State [IS] style, which is spreading over large swathes of the region. This phenomenon must be stopped. Yes, we prefer the former reality in the Golan — the quiet, the clearly defined counterpart on the other side, the fulfillment of agreements. That doesn’t mean, however, that we plan to embrace either one of the warring sides. At this point, we’re closely monitoring the events. We’re bracing for any scenario, and we will know how to react if the need arises.”

The response policy also poses a problem. To what exactly does one respond? Should every stray mortar shell that “slip-slides” from the heavy battles raging near the Israeli border fence trigger an immediate launch of an Israeli Tamuz missile at a Syrian target? If so, which target precisely? How can one even tell who fired the mortar shell, which is the one that should be punished?

“A highly complex reality” is what the Israel Defense Forces are calling the events across the fence in the Golan Heights. As of Sept. 2, Assad’s military is carrying out a heavy counterattack against the insurgents in a bid to regain control of the “regime’s symbol,” namely, the border crossing at Quneitra, and to cement its hold in the city itself. The outcome of this counterattack remains unclear. Will Assad regain control of the Golan Heights or will he lose it? All Israel can do is monitor events closely and intently.