Syrian rebels, including Jabhat al-Nusra, are hoping they can take control of Quneitra province and break the siege on Ghouta in eastern Damascus. 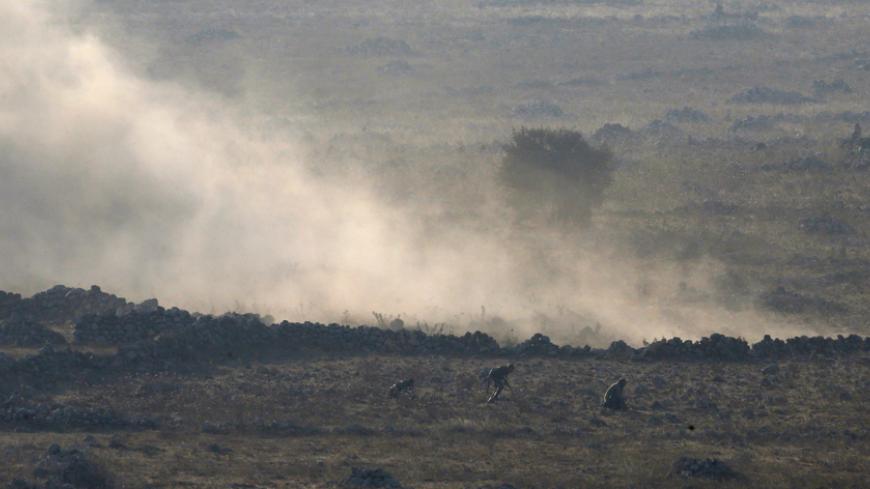 Syrian army soldiers leave their position after it was bombed by rebel fighters during a battle in Syria near the border fence with the Israeli-occupied Golan Heights, Sept. 1, 2014. - REUTERS/Baz Ratner
Khaled Atallah
September 10, 2014

GOLAN HEIGHTS, Syria — The al-Waad al-Haq battle waged by Syrian opposition factions has broken the calm in the Golan Heights that prevailed for decades. The battle, in which Jabhat al-Nusra took part, began on Aug. 27 for control of the demolished Syrian part of Quneitra city, and its crossing to the Israeli-occupied territories and to al-Rawadi village. The sound of explosions and fighting could be heard from all sides. We could see smoke rising from several points along the flatland and surrounding hills. The Syrian army is blockading villages around Quneitra, while its warplanes heavily raid areas near these villages, thus making it impossible to access.

Reaching the Syrian part of the occupied Golan Heights is not easy, for you have to go down several roads that turn the Quneitra countryside into a fortified region, where rebels and Jabhat al-Nusra are gathered.

The Israeli flag and a few soldiers moving in the hills overlooking the Syrian part of the Golan Heights could be seen in the Israeli-held Golan Heights.

According to opposition activist Rami al-Mohammed, the first clashes between the rebel fighters and Jabhat al-Nusra on the one hand, and the government forces on the other, caused the latter to withdraw from the border crossing to the side of the occupied Golan.

“The opposition fighters managed to control the Quneitra crossing on the border with the occupied part of the Golan, following fierce battles with the regime forces. Clashes are still ongoing in several villages in the countryside of the city. Fighters seek to liberate the entire province,” Mohammed told Al-Monitor.

He said the opposition and Jabhat al-Nusra fighters managed to take control of the destroyed city of Quneitra following fierce battles with the Syrian army. “Rebels attacked the countryside of the city and succeeded in controlling Tal Mashara and Khamisiyah to the east of Quneitra, which was used by the regime as a launching pad to bomb rebels,” he said.

On Sept. 4, rebel factions along with Jabhat al-Nusra declared the start of a military operation to take the villages in the Quneitra countryside, starting from the east and southeast of the central region, down to the countryside of Quneitra.

The Syrian army mobilized reinforcements on the outskirts of the rebel-controlled areas, according to Muawiya al-Jabari, a leader of the armed groups in the area.

“Clashes broke out with the regime forces on the outskirts of the hills that we controlled in eastern and southeastern Quneitra. This region used to be a fortification area for the regime. The regime warplanes have been targeting these hills on a daily basis, while our groups are trying to control the airbase, Tel al-Pasha, Nahid and Bazzaq, in addition to al-Hamidiyah northeast of Quneitra, which is seen as a stronghold for the regime,” he told Al-Monitor via Skype.

On Sept. 1, the Syrian newspaper Al-Watan, which is close to the authorities, wrote: “In the countryside of Quneitra, the army units, backed by the National Defense Forces, continue to face the attempts of the armed fighters affiliated with Jabhat al-Nusra and other terrorist organizations to control al-Rawadi roundabout and al-Hamidiyah town. Meanwhile, military preparations are still ongoing to launch a campaign to regain full control of Quneitra city — which had been completely destroyed by Israel before its withdrawal in 1974. The campaign also aims at expanding control to the checkpoint on the dividing line between the regime forces and Israeli units.”

Israeli forces opened several entrances through the border fence with heavy artillery shelling when rebels first launched their attacks on this region, according to a lieutenant in the Syrian army, who spoke to Al-Monitor on the condition of anonymity.

The lieutenant, whom Al-Monitor met in Hamidiyah, said, “Opposition fighters began their attack from the Qahtaniya village in the countryside of Quneitra and headed toward the border crossing. They tried to advance toward al-Alam roundabout and Rasm al-Rawadi. They also tried to storm the villages beside al-Hamidiyah, but our forces curbed their attacks and forced them to retreat to the points they had controlled near the crossing.”

In another development, the Israeli army said it had targeted the headquarters of the Syrian army’s 90th Brigade in response to the latest strikes from the Syrian side on Sept. 4.

Moreover, on Aug. 31, the Israeli army also announced that it had downed a drone over the Israeli-occupied Golan Heights. The Israeli army said in a statement that it “shot down an unmanned drone that had entered Israeli airspace near the Syrian border town of Quneitra.”

According to Tamer Kayal, a journalist specializing in military affairs, the opposition and Jabhat al-Nusra managed to progress in the Golan Heights, given its proximity to the Jordanian border, where their bases are located, as well as the supply routes they have in this area.

“The attack on the Quneitra crossing wouldn’t have been possible had it not been for the alliance between Jabhat al-Nusra and the other armed groups. Israel has always paved the way for insurgent attacks, under the pretext of responding to fire from the Syrian army, by bombing the army’s sites in Tel Abu al-Nada and Tall Abu al-Faras to the south,” Kayal said.

Kayal said that the rebel groups fighting in the area do not consider Israel an enemy and the latter does not have concerns about them.

“Israel [is not targeting Syrian army positions] out of love for the opposition fighters. It only seeks to undermine the Syrian army in this region. Both Israel and the armed groups would benefit from international agreements that would limit the Syrian army military buildup and its use of air forces. Moreover, Israel mainly seeks to weaken Syrian sovereignty over the Golan, should chaos spread,” he added.

The Syrian army continues to send reinforcements to begin a wide-scale military operation to regain lost territory in the destroyed city of Quneitra. The army also mobilized reinforcements to move toward al-Harra, al-Sanamayn, al-Jidiya and Zimrin east of Golan, in Daraa province. Meanwhile, rebels are still advancing toward the outskirts of Madinat al-Baath and Khan Arnaba, which are adjacent to the center of Quneitra, where state institutions are located. Should the rebels control these two towns, they would control most of the Syrian part of the Golan Heights and help in its goal to break the siege on Ghouta in eastern Damascus through the south. However, fighting is escalating daily, with little signs of a final settlement to this battle soon.